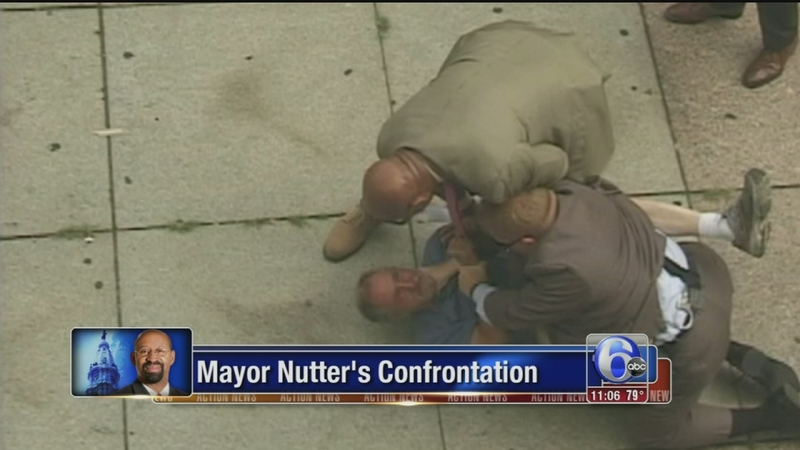 The cell phone footage captured the 56-year-old man, who identifies himself as George Creamer, walking around in the background where Mayor Nutter was talking with staff members outside the Municipal Services Building examining problem areas in Center City.

Suddenly, Creamer approached and was grabbed by one of the mayor's security guards.

Once on the ground, Mayor Nutter jumped in to help calm and restrain the homeless man.

"My main role here was to really try to just calm him down and have him understand that no one's here to do anything to you; this is not about you," Nutter told Action News Tuesday night.

Then a second homeless man tried to join in the fray, but was pushed back by another security officer.

Eventually things calmed down. Nobody was hurt and the men were not arrested and allowed to leave.

Creamer says he had no intent to harm the mayor.

"No, I'm not a violent person, no not at all, and that's why I'm not in jail cause they know me," Creamer said.

He told Action News he just wanted the mayor to know the plight of the homeless as we get closer to the pope's arrival in September.

"We're not gonna be allowed on the parkway when the pope comes, and that's where I sleep. I only sleep down here when it's gonna rain," Creamer said.

The mayor was asked if he plans to increase his security detail in light of the incident.

"This is the first time anything like this has ever happened," Nutter said.

Nutter says he did not feel threatened at any time. He added in jest: he's from West Philadelphia and can pretty much take care of himself.