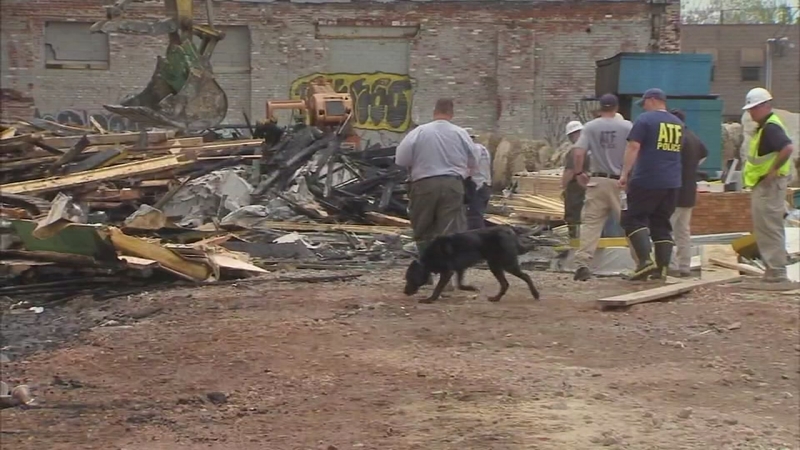 Residents woke up to a flickering glow of lights outside their windows and what initially sounded like the patter of rain.

"I went into my bathroom, and it was all just awash in this orange glow," said Chris Payne.

"We heard, like, crackling," said Bernadette Pitts. "It sounded like rain. That's what we thought it was. Then all of a sudden we heard the fire."
EMBED More News Videos

Fire destroys homes in Pt. Breeze: Jeannette Reyes reports during Action News at noon on May 1, 2017.

Several of the buildings were still in the early stages of construction. Five had been completed.

Fire damages homes under construction in Point Breeze. John Rawlins reports during Action News at 5 p.m. on May 1, 2017.

Now flames were ripping through them and quickly spreading.

"You could look out the back of it, and you could see the fire leaping like 20 to 30 feet in the air," said Payne.

"Anywhere else in the country this would have gone to five alarms, and the entire block would have been involved in fire," said Philadelphia Fire Commissioner Adam Thiel. "But here was a quick, aggressive fire attack."

These are the new homes from behind. Homes on the corner are not visibly damaged by fire. But will likely have water damage. @6abc pic.twitter.com/bxr6Anak2s

They were soon dealing with a collapse, which was caught on cell phone video by Action News producer Cheryl Mettendorf, who was in the area at the time.

"Before any separations are put in (the building), it's really dangerous because the entire building is a system," said Thiel. "And when all of the structural components are not put in it makes it a collapse hazard. Also you get a lot of air in there. And air, of course, feeds the fire once it starts."

Firefighters were able to contain the blaze and place the situation under control within an hour.

The property owner, with OCF Realty, would not speak with Action News on camera, but said there was just an open house yesterday, and one family was set to move in later on Monday.

Residents say the neighborhood in general was excited.

But not everyone was welcoming of the new development.

"The developer is a friend of ours," said Payne, "and it's kind of been under contention because of gentrification issues. Some people who've lived in this neighborhood for a long time were not looking forward to seeing this development go in."

Officials say at least four of the homes have been completely destroyed.

Fire investigators are looking at all possibilities as they work to determine what caused the fire, including arson.

An Arson dog appeared to react at least twice and samples were taken for later lab analysis for evidence of a possible accelerant.

Police detectives were out shortly after the fire was extinguished searching for any surveillance video that may have captured what happened in the minutes before the flames erupted.

The investigation continues. Meanwhile, foul play has not been ruled out.
EMBED More News Videos

Fire damages homes in Pt. Breeze: Jeannette Reyes reports during Action News at 6 a.m. on May 1.