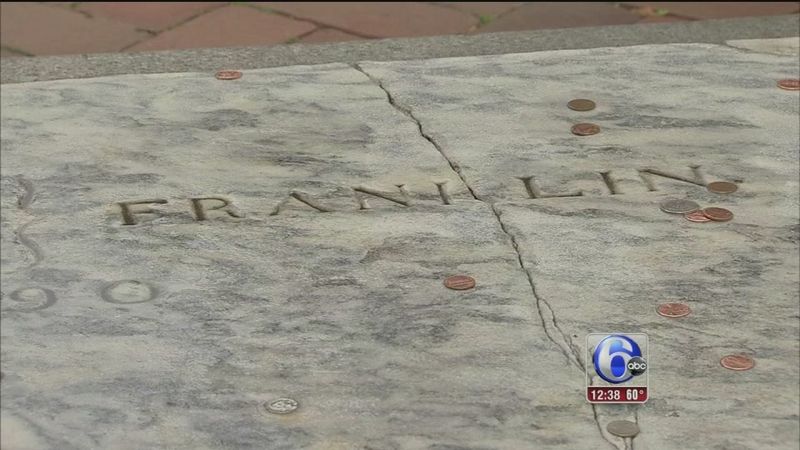 OLD CITY (WPVI) -- The gravestone marking Ben Franklin's final resting place in Philadelphia is in need of repair and a number of famous faces have come to its rescue.

A GoFundMe page set up by the Christ Church Preservation Trust surpassed its goal Tuesday night thanks to a $5,000 donation from Jon Bon Jovi and family and another $1,000 from the Philadelphia Eagles. 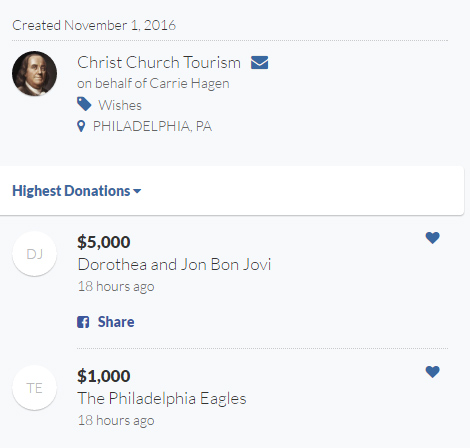 The stone at 5th and Arch in Old City has been damaged, officials say, and some of it comes from the ritual of visitors tossing pennies onto it.

The pennies are pitched at one of Franklin's famous quotes inscribed on the marker: "A penny saved is a penny earned."

The pennies add up to about $4,000 each year, but the cost of restoration is much more.

"To repair the gravestone actually costs $76,000. We have done our best to raise $66,000, so we need to raise another $10,000," said Carrie Hagen of the Christ Church Preservation Trust told Action News Tuesday.

Instead of scooping up more coins, the group went with the more modern tactic of a GoFundMe.com page.

John Hopkins, the burial ground and tourism manager for the Christ Church Preservation Trust, said it's something Franklin would probably approve of.

"He was pretty much the fundraiser of his day," Hopkins said. "We have Christ Church steeple partly because he went around selling lottery tickets, promoting them."
The gravestone is a simple marble slab created after Franklin's death in 1790, and the penny tradition draws tourists here.

"There are tales brides would do on their way to get married on their way to Christ Church. It's become a tradition. It's not the main cause of the crack but it doesn't help," said Hopkins.

Along with the pennies, moisture between the base and original stone is to blame too.

And the tradition isn't going away.

Organizers were hoping to have the money raised by December 31 so they have the gravestone fixed in time for the anniversary of Franklin's death in April.