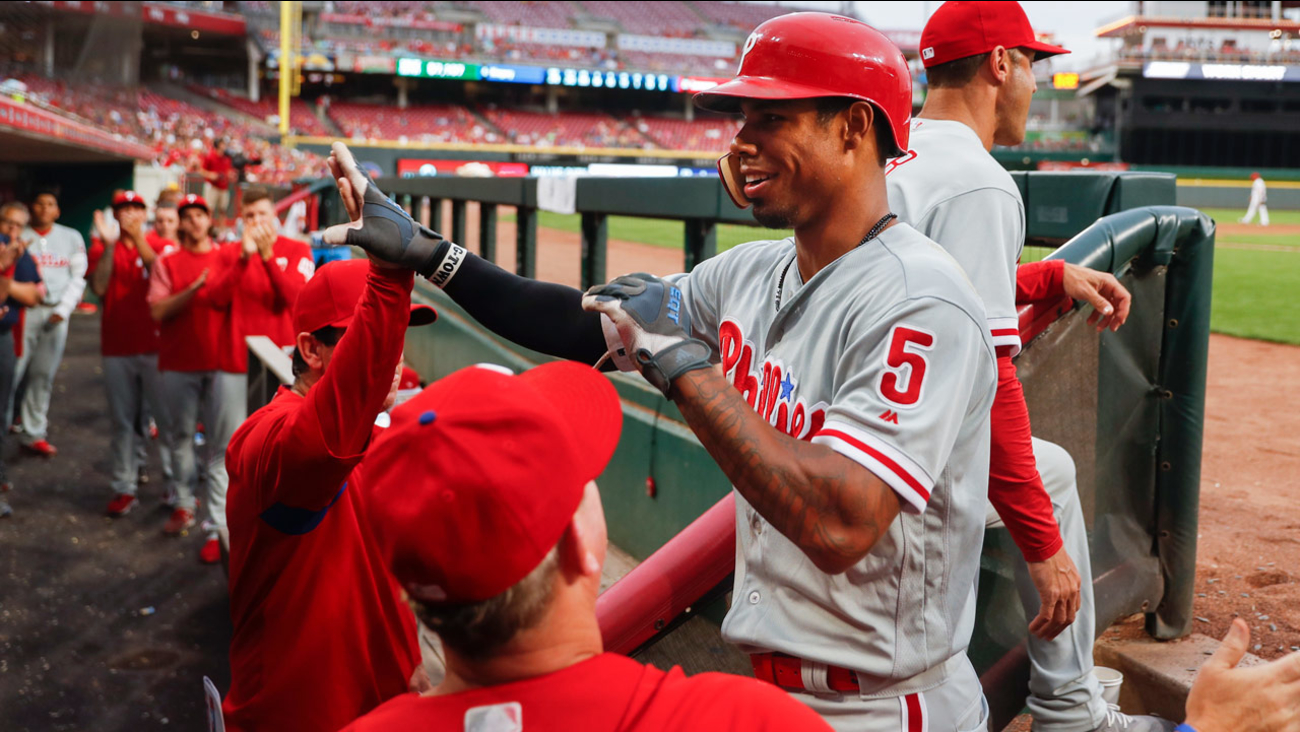 CINCINNATI -- The Philadelphia Phillies are having so much fun right now that Nick Williams compared them to kids at recess.

Williams, Rhys Hoskins and Maikel Franco each hit two of Philadelphia's record-tying seven home runs, and the Phillies overpowered the Cincinnati Reds 9-4 on Thursday night in the opener of a four-game series.

Carlos Santana added a two-run homer as the NL East leaders tied the franchise record for home runs in a game, set on Sept. 8, 1998, against the Mets.

"We were getting into deep counts and then doing damage at the end of those counts," Kapler said.

Santana's 16th homer of the season gave him a 3-0 lead in the first inning, giving the rookie pitcher an early cushion.

"Obviously, it made me feel more confident," he said through interpreter Diego Ettedgue. "Having the lead was huge. It helped big-time."

The Phillies opened a six-game road trip with their fourth win in five games, including two out of three against the West-leading Dodgers in which Philadelphia scored a combined 20 runs.

"The Dodgers have great pitching," Hoskins said. "We put a lot of runs on the scoreboard against them, and it carried over into tonight."

Twelve of the game's combined 13 runs were produced by homers. Philadelphia's seven home runs were the most given up by the Reds in a game this season. The Phillies tacked on three doubles for a season-high 10 extra-base hits.

Hoskins hit solo home runs in the first and sixth innings, giving him six in his last six games and pushing his season total to a career-high 20. He hit 18 last season.

Franco's first homer, off reliever Michael Lorenzen (1-1), snapped a 4-4 tie in the fifth. Williams led off the fourth with his 13th homer, one more than the 12 he hit as a rookie last season, and added his 14th in the ninth to tie the record.

Suarez's first-inning liner into the left-field seats gave him homers in a career-high four straight games.

Reds rookie Tyler Mahle set a career low in innings for the second time in three starts. Mahle, who lasted 2 1/3 innings on July 11 at Cleveland, logged just one on Thursday, throwing 53 pitches while allowing six hits and three runs with a walk and three strikeouts.

"I'm missing spots," Mahle said. "It happened so fast. I didn't go to my breaking ball soon enough. When I did, I got swings and misses, but they were sitting on the fastball."

Eugenio Suarez is the first Reds third baseman to homer in four consecutive team games since Chris Stynes in July 2000. OF Jay Bruce homered in five consecutive games in July 2016.

For the first time in franchise history, three Reds players have homered in four straight appearances. Suarez joins Scooter Gennett and Joey Votto in the club. All three were All-Stars.

The Reds, last in the NL Central, slipped to 2-5 on their 10-game homestand coming out of the All-Star Game.

Phillies: SS J.P. Crawford had his first session of batting practice on Thursday since going on the disabled list on June 20 with a broken left hand.

Reds: OF Jesse Winker will have season-ending surgery to repair a right shoulder injury. The Reds promoted former Yankees OF Mason Williams from Triple-A Louisville and moved IF Alex Blandino to the 60-day disabled list.