The getaway car is believe to be a grey Honda with a missing front grill.
WPVI
By Alyana Gomez and 6abc Digital Staff 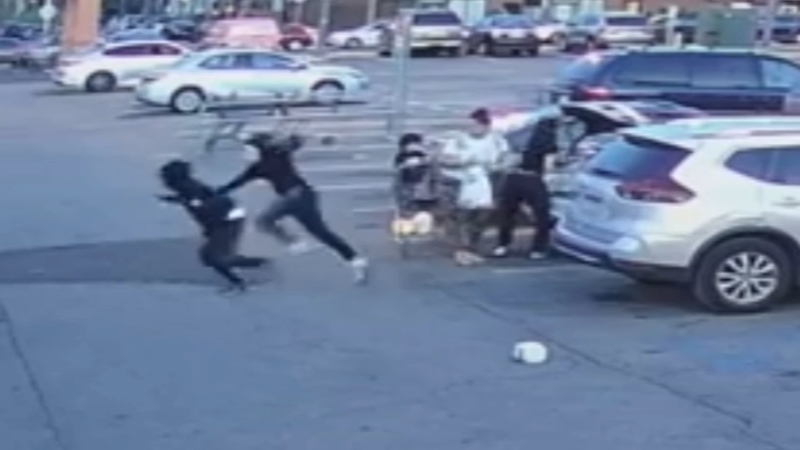 PHILADELPHIA (WPVI) -- Police are searching for two male suspects after surveillance video captured a woman's purse being snatched while her small child sat in the shopping cart next to her in North Philadelphia.

The incident happened Friday, April 15, just before 8 p.m., in the parking lot of Save A Lot on North Broad Street in Tioga-Nicetown.

Video showed the woman tried to chase after them but ended up falling to the ground as the thieves got away.

Kimberly Frierson says after someone tried to rob her and her daughter in March, she is more cautious than ever.

"Looking over my shoulder, feeling like possibly someone is following me. If there's a crowd of people behind me, I might let them pass, so he definitely took a part of my safety," said Frierson.

Other women Action News spoke with say they leave their handbag at home and keep their head on a swivel.

"I just put my money in my pocket, and then I go because it's just like really crazy the things that people do," said Lydia Thompson of North Philadelphia.

Linda Moragne of North Philadelphia said, "I'm always looking around, and as soon as I get in my car, I lock my doors. Because a couple years ago, a friend of mine got robbed in this same parking lot."

Law enforcement said in the past that shoppers should be caution with large bags sitting in shopping carts unattended while loading their groceries.

They recommend it's better to have a smaller bag if you don't have one at all.

Police say these two suspects are wanted in connection to at least five other strong armed robberies that happened over the last two weeks.

The getaway car is believe to be a grey Honda with a missing front grill.

If you recognize the suspects or a grey Honda with a missing grill, contact Northwest Detectives at (215)-686-3550.