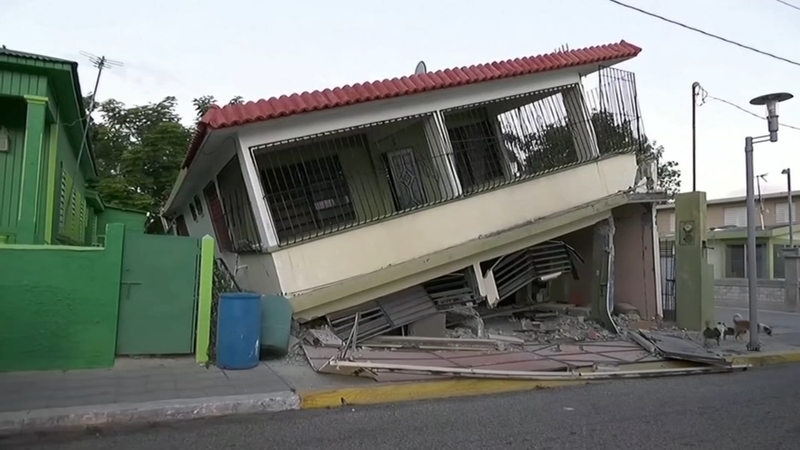 PHILADELPHIA (WPVI) -- More than 250,000 people in Puerto Rico are still without water and half a million have no power in the wake of the multiple earthquakes that have terrorized the southwestern part of the island.

The magnitude 6.4 quake that struck before dawn on Tuesday killed one person, injured nine others and knocked out power across the U.S. territory, and more than half a million Puerto Ricans remained without electricity early Wednesday. Tuesday's quake was the strongest in a century.

There are a number of people in the Delaware Valley who have been actively monitoring developments in Puerto Rico. Some are in fact now planning to go there to offer assistance to rattled residents-- many of whom are sleeping out on the streets for fear their homes could collapse.

Amanda Ramirez, from our partners at Univision, was in the town of Ponce on Wednesday.

"There's more than 200 families that live in this community but most of those people are now staying with family members in other places on the island or have gone to the shelter that the government has put in place," Ramirez reported.

Activist Nancy Santiago, who now lives in Puerto Rico but has roots in Philadelphia, says after going through a major hurricane and now earthquakes, many on the island are understandably shell shocked.

"Folks are living in a moment of crisis and trauma that feels never-ending. That level of toxic stress on the body not only makes people physically ill, it makes it hard to get your life back," she said.

"Puerto Ricans are very resilient and they have learned to normalize what is power outages, living without water, but they really just seem like they can't get a break," added Councilwoman Maria Quinones-Sanchez.

She says her home on the island was not damaged and her relatives are safe, but she, like Santiago, plan to fly to Puerto Rico Saturday to help with relief efforts.

"And I'm getting calls, 'What do we do next, what do we do next.' And that's why once I get on the ground, I want to talk to our partners and figure out how we contribute to support," she said.

For those wanting to contribute, she believes Salvation Army Puerto Rico is key for providing food, water and other emergency services. Santiago says there are other non-profits that people can contribute.

"Hispanics in Philanthropy, which is the organization I represent, has a whole host of non-profit organizations that we vet and work with on a regular basis," said Santiago.