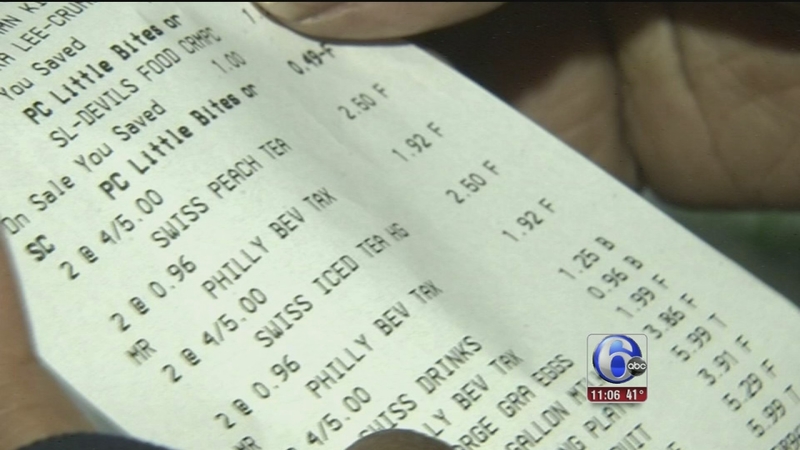 PHILADELPHIA (WPVI) -- We knew it was coming, but Philadelphia's new beverage tax is still giving some shoppers sticker shock.

The tax took effect on Sunday at the distribution level, and, as expected, some companies are passing the added cost on to customers.

Shoppers on Monday were checking receipts to gauge the impact of the new beverage tax.

ShopRite says in the interest of transparency it wants customers to understand why prices are significantly up, and is taking a different approach. The primary shelf tags show the untaxed price. But below them in yellow is the full tax that will be added at the register and printed as a separate line item.

Chuck Andrews picked up a $1.77 gallon jug of tea, got home and looked at his receipt.

"When I read the receipt I'm like, 'Wait a minute. I paid more in tax than I did for the product,'" Andrews said.

Andrews' point is he would rather have the full cost, the product and the tax inclusive, posted on the main shelf tag.

A customer at a Save-A-Lot on Woodhaven Road snapped a picture of a 12-pack of diet green tea and the price surge of what normally costs $4.99. It's now $8.03.

What would normally cost $4.99 anywhere else, now costs almost twice the price in Philadelphia due to the sugary beverage tax .@6abc pic.twitter.com/ZTe40vLdlZ

"I understand that the school systems need money, but there's other ways to go about it than to make such a drastic increase on soda," Elena Porsch of South Philadelphia said.

The mayor's office tells Action News, "The tax is on the distribution of sweetened beverages from companies like Coca-Cola to dealers like supermarkets, and because it's not a sales tax... distributors don't have to pass it on to customers."

Small businesses like Franzones in Manayunk have already been getting an earful from customers about the higher prices and wonder what this will mean for their future.

Many people are saying they will go out of Philadelphia rather than pay the tax. Others say they will change what they buy.