High schoolers from at least five nearby schools attended the rally in Center City.
WPVI
By 6abc Digital Staff 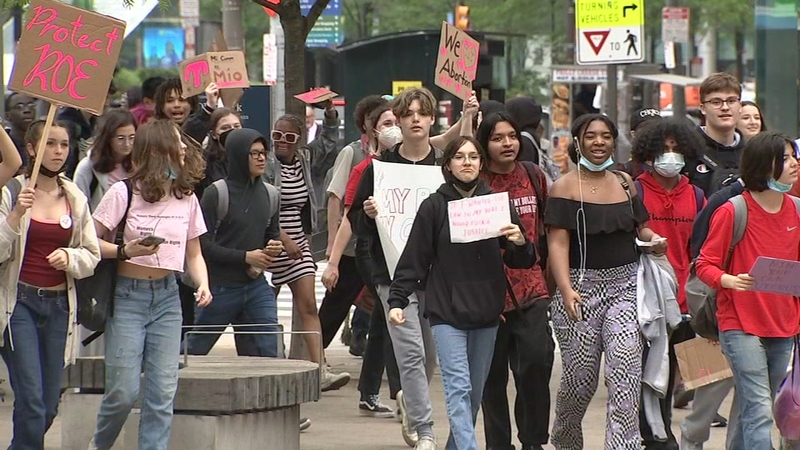 Philly students walk out of class to rally for abortion rights

PHILADELPHIA (WPVI) -- Dozens of students marched to Philadelphia's Love Park on Friday morning as part of a walk-out for abortion rights.

High schoolers from at least five nearby schools attended the rally in Center City.

Students from Franklin Learning Center, Masterman, Friends Select, Science Leadership Academy and University of the Arts were among those at the rally.

The walk-out comes just days after the Senate fell far short in a rushed effort toward enshrining Roe v. Wade abortion access as federal law, blocked by a Republican filibuster in a blunt display of the nation's partisan divide over the landmark court decision and the limits of legislative action.

The almost party-line tally promises to be the first of several efforts in Congress to preserve the nearly 50-year-old court ruling, which declares a constitutional right to abortion services but is at serious risk of being overturned this summer by a conservative Supreme Court.

President Joe Biden called on the Congress controlled by Democrats to pass legislation to protect abortion services for millions of Americans. But his party's slim majority proved unable to overcome the filibuster led by Republicans, who have been working for decades to install conservative Supreme Court justices and end Roe v. Wade. The vote was 51-49 against proceeding, with 60 votes needed to move ahead.

"The American people are watching," said Senate Majority Leader Chuck Schumer ahead of the vote. "The public will not forget which side of the vote senators fall on today."

Congress has battled for years over abortion policy, but the Wednesday vote to take up a House-passed bill was given new urgency after the disclosure of a draft Supreme Court opinion to overturn the Roe decision that many had believed to be settled law.

The outcome of the conservative-majority court's actual ruling, expected this summer, is sure to reverberate around the country and on the campaign trail ahead of the fall midterm elections that will determine which party controls Congress.

The political fallout continues to grow after a leaked draft opinion indicates the Supreme Court is poised to overturn Roe v. Wade. Jim Dolan has the latest details.