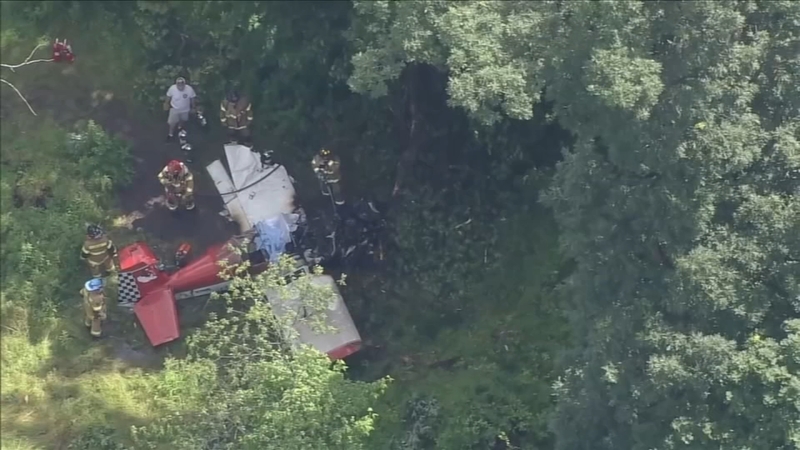 Pilot killed after plane crashes behind homes near Doylestown, Pa.

BUCKINGHAM TWP., Pennsylvania (WPVI) -- The pilot of a small plane was killed on Tuesday morning after the aircraft went down in a wooded area just behind some homes near Doylestown, Bucks County.

The call went out at approximately 10:30 a.m. for police, firefighters and medics to respond to the 3800 block of Charter Club Drive in Buckingham Township.

Officials are on the scene of a plane crash in Doylestown, Bucks County.

There, authorities confirmed a plane down in the trees behind the residential area.

The view from Chopper 6 showed the damaged red-and-white plane on the ground with firefighters nearby.
The lone occupant of the plane was pronounced dead at the scene, Buckingham Township police said.

The victim has been identified as 79-year-old Martin Sailer Jr. of Upper Black Eddy, Pa.

The FAA said Sailer was the only person aboard the aircraft, which is a single-engine Vans RV-6A.

"I saw the plane hit the top of trees and I was expecting to hear a crash but it was more of a thud," said Tom Kanyok, who lives about 200 yards from the crash site.

After hearing the crash, he and a neighbor went towards the sound to see if they could help.

"We got about a few steps into the woods but the flames were pretty much engulfed in front of the cockpit," said Kanyok.

Action News has learned the pilot was flying in the region for about two hours before the crash.

Officials say Sailer contacted the tower to say the plane was on fire and crashed as he was coming in for a landing.

The crash scene is about two miles away from the Doylestown Airport.