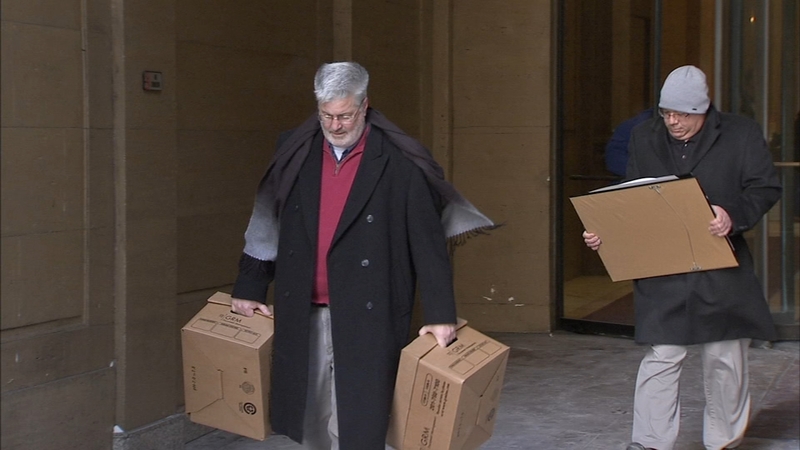 PHILADELPHIA (WPVI) -- It is one of the most shocking and drastic shakeups of the District Attorney's Office that anyone can recall.

But it most definitely should not come as any surprise to those who had been following the campaign promises of Larry Krasner.

The purge was on full display as the file boxes kept rolling out of the D.A.'s office.

Thirty-one staffers, including a number of murder squad prosecutors, high ranking deputies and division chiefs were among those terminated.

Among them Mark Gilson, a 30 year veteran prosecutor who sent many killers to life in prison or death row.

He like others Action News reached out to were reluctant to speak about their firings.

But instead they were hauled before a human resource bureaucrat who gave no explanation as to why they were being let go.

There was a statement from Krasner's office late Friday:

"Change is never easy. D.A. Krasner was given clear mandate from voters for transformational change. Today's actions were necessary to achieve that agenda."

For FOP President John McNesby who was never a big fan of Larry Krasner, he had the following to say about today's shakeup.

"It's shocking number one, and it's kind of scary for what it says is going to happen to the court system over the next 6 or 7 months," McNesby said.

Former prosecutor Richard Sax, who was out of town and served 37 years in the D.A.'s office, 30 of them in the homicide unit was devastated. He says there was only one thing those who were fired had going against them.

"They won their cases, they prevailed. They achieved justice for the victims. That's what that they did, they did their job," Sax said.

He says as bad as he feels for the 31 who were fired, he feels worse for the city.

"I feel worse for the city of Philadelphia because I think that the citizens are really truly going to suffer," Sax added.

Tasco says Krasner has every right to put in people he believes will carry out his agenda.

"He wants the staff to be more engaged and certainly pay attention to the cases that come, and just not be ready to send somebody to jail."

It remains unclear how soon Krasner will replace the fired prosecutors and staffers or for that matter, how this will impact each unit's caseload.

Krasner has been a critic of what he calls mass incarceration. He vows to not pursue death sentences and backs the idea of safe injection sites for heroin users.

He would also like to see the use of cash bail scaled back and eventually eliminated.

The police union and the Fraternal Order of Police have criticized Krasner as being soft on crime and hostile toward police.