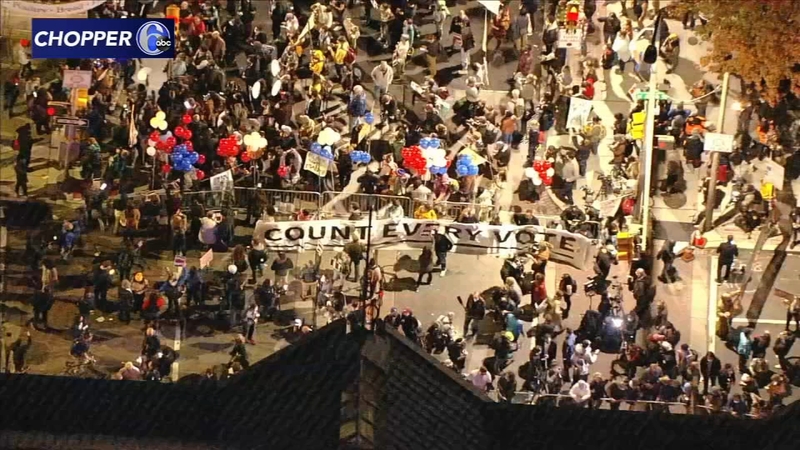 PHILADELPHIA (WPVI) -- President Donald Trump and former Vice President Joe Biden are hotly contesting Pennsylvania's 20 electoral votes, with both campaigns seeing a victory in the state as crucial to their chances of winning the White House.

While county officials tally votes from what is shaping up as massive turnout, the Trump campaign, state election officials, Republican candidates and others have gone to court in recent weeks to settle fights over aspects of state election law, particularly its year-old law that greatly expanded mail-in voting.

Despite a flurry of legal action by Trump and the Republican Party over aspects of the count, counties across Pennsylvania headed toward the finish line Thursday of a massive tabulating effort that included millions of mail-in ballots.

Protesters gathered outside the Pennsylvania Convention Center where the votes are being tallied in Philadelphia.

Chopper 6 over dueling protests outside Pa. Convention Center in Philadelphia on November 5, 2020.

On one side it's a dance party in support of Joe Biden and on the other, President Trump supporters.

"I want the Republicans and the Democrats to come together inside and count these votes correctly," said Trump supporter Brenda Horton.

"I deserve the right to vote and have my vote counted," added Biden supporter Gwendolyn Hardeman.

The Trump side says they just want transparency. They demand Trump representatives to be able to watch the votes be counted.

The Biden side says they just want every vote to be counted and feel the Trump administration is trying to deny that.

As far as this style of election, one comprised of millions of mail-in votes, like America has never had before, the Trump side believes there's something not right.

"This left the voting system wide open to voter fraud. If they are so worried about them being counted correctly ...what are they worried about?" asked Trump supporter David Horton.

Biden's side says there's simply no proof of that.

And officially, there is no report of that happening.

"There is absolutely no evidence of that claim, and it's dangerous to a democracy to claim that without evidence," said Biden supporter, Louis Wile.
Report a correction or typo
Related topics:
politicsphiladelphiadonald trumpprotestvote 2020joe biden2020 presidential electionpoliticselection
Copyright © 2021 WPVI-TV. All Rights Reserved.
2020 PRESIDENTIAL ELECTION

George W. Bush reveals who he voted for in 2020 election