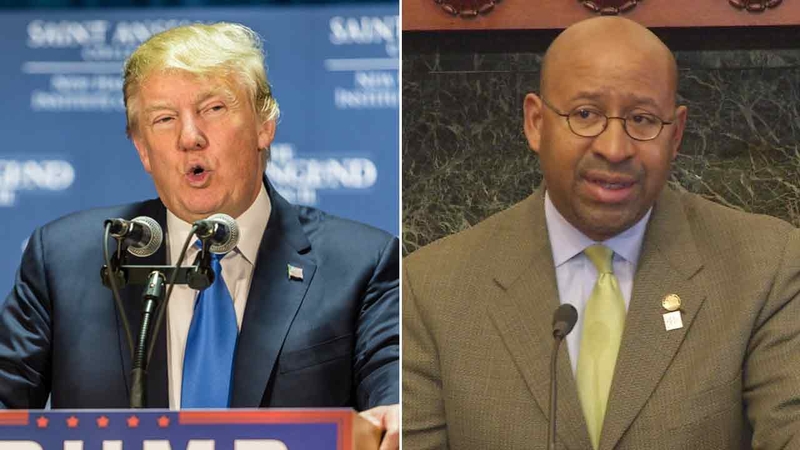 PHILADELPHIA (WPVI) -- Voices all over Philadelphia are denouncing Donald Trump, after the billionaire proposed a national ban on Muslims entering the U.S.

Mayor Nutter even said he'd ban Trump from the city if he could.

"I think in recent times, nothing more vile or ignorant could be said, whether it's a political environment or any other environment," the mayor said. "And certainly, if I had the power to do so, the only banning that should be done is that person being allowed in the City of Philadelphia."

Tuesday afternoon the mayor held a news conference with various city and religious leaders to condemn Trump's statements as well as some anti-Muslim activities that have occurred here and across the nation.

"It engenders a level of fear, of fear-mongering, that we have not seen literally since the 1930s and 40s," he said.

The mayor went on to say, "He's taken a page from the playbook of Hitler. Demonize a group, blame that group for a country's problems, and then seek to ban or eliminate that group as some kind of solution to a problem that does not exist."

Mayor Nutter said Trump is 'taking a playbook from Hitler.'

The latest firestorm courtesy of Donald Trump's quest for the White House has generated far more widespread condemnation than his attacks on President Obama, Mexicans, the media, or his opponents.

Rabbi Arthur Waskow from the Shalom Center tells us, "The notion that making pariahs out of millions of Muslims is just, I mean, wildly immoral, vial, disgusting."

Many Muslim Americans predicted this surge of anti-Muslim fever after ISIL's massacre in Paris, and now in the wake of San Bernardino.

"What Donald Trump is doing is serving ISIL's mission and purpose. He's working out of their playbook. So the more the United States appears to be anti-Muslim, anti-Arab, the better ISIL, or ISIS, will do in getting recruits," said activist Marwan Kreide.

On Monday night surveillance video was released showing the tossing of a severed pig's head in front of a lower Germantown Avenue mosque. The act is not just an insult to Muslims, but it could be prosecuted as a hate crime or harassment.

A worshiper at that mosque tells Action News, "Hopefully it's not going to happen again, and the officials will go after the bad people and hopefully get them for this act."

Mayor Nutter is promising a full scale investigation to find those responsible for the pig's head incident.

He said, "We'll have continued vigilance in regards to the desecration of the mosque last night. To the Muslim community in Philadelphia you are our brothers and sisters."

Nutter also announced Tuesday a reward of $2,000 for information that leads to an arrest and conviction not only in this case, but for all hate crimes in the city.