Word of papal visit greeted with enthusiasm in Philadelphia 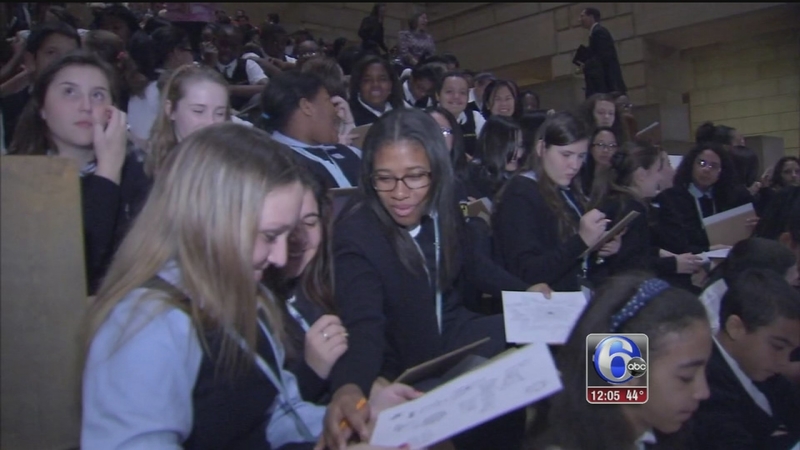 CENTER CITY (WPVI) -- "It's excellent that he is coming," said Eva Watts of Chester, Pa.

News of the pope's Philadelphia visit next year brightened a rainy morning in Center City.

For many, it's a significant trip whether or not you are Catholic.

"He's a speaker for a billion people," said Pavlos Beiter of Fishtown. "What he says is a pretty big deal either way."

"I worship at a Jesuit church," said Beth Shay of Fairmount. "I'm a big fan of Jesuits. He is a real hero of mine."

At Monday morning's mass in the chapel of the Cathedral Basilica of Saints Peter and Paul on Logan Square, the news was welcome, his attendance at the World Meeting of Families seen as a great blessing.

"What the pope has given us is a gift," said one man in Center City. "Human and humble."

The conference thrusts Philadelphia in the global spotlight, with opportunities for jobs and tourism.

"People will have an idea of Philadelphia will be pleasantly surprised when they get here and see some of things going on in the city," said Tom Morrin of Chester County.

"I think it's a great idea for him to come," said Lawrence Miller of Southwest Philadelphia. "It should bring more people to Philly, more job opportunities."

Students from several local Catholic schools were invited to Monday's official announcement at the Philadelphia Museum of Art.

Those spoke to said they are thrilled that someone whom they try to emulate will be here in their hometown.

"He's always helped the poor," said Isabela Drummond, a 4th grader at St. Peter the Apostle School. "I'm trying to do that. It's an honor for him to come."