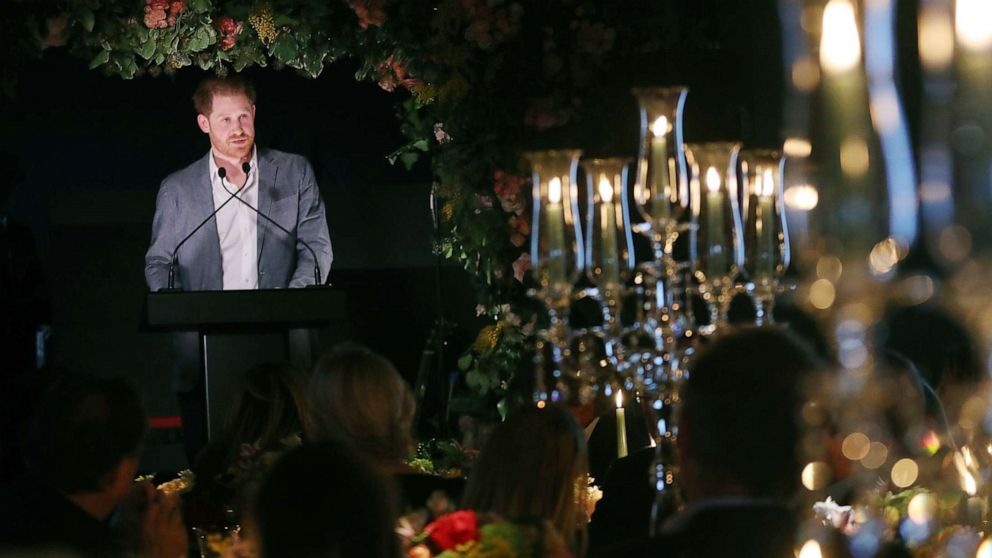 ABCNews
By KATIE KINDELAN
Prince Harry has made his first public comments about the decision he and his wife Meghan, the Duchess of Sussex, made to no longer be "working members" of Britain's royal family.

"The decision that I have made for my wife and I to step back, is not one I made lightly," Harry, 35, said Sunday night at an event to benefit his charity Sentebale. "It was so many months of talks after so many years of challenges. And I know I haven't always gotten it right, but as far as this goes, there really was no other option."

Royal watchers noticed Harry's use of "I" in that line of his speech as much of the blame around Harry and Meghan's new future has been placed on Meghan, who gave up her life in Los Angeles and Toronto and her acting career when she married Prince Harry in 2018.

"I have grown up feeling support from so many of you, and I watched as you welcomed Meghan with open arms as you saw me find the love and happiness that I had hoped for all my life," Harry said. "Finally, the second sonof Diana got hitched, hurray!"

"I also know you've come to know me well enough over all these years to trust that the woman I chose as my wife upholds the same values as I do. And she does, and she's the same woman I fell in love with," he added. "We both do everything we can to fly the flag and carry out our roles for this country with pride."

"Once Meghan and I were married, we were excited, we were hopeful, and we were here to serve," Harry said. "For those reasons, it brings me great sadness that it has come to this."

Buckingham Palace announced over the weekend that beginning this spring, Harry and Meghan will no longer use their HRH titles and will be known only as Harry, the Duke of Sussex, and Meghan, the Duchess of Sussex. The couple and their 8-month-old son, Archie, plan to spend the majority of their time living in North America, though they will keep their Frogmore Cottage home in the U.K.

Harry and Meghan will no longer rely on public funds for their royal duties and will no longer travel overseas on behalf of Her Majesty. They are still members of the royal family and will attend family events like Trooping the Colour when invited by the queen, according to a palace source.

Prince Harry is losing his military titles and patronages including Captain General Royal Marines, Honorary Air Commandant Royal Air Force Honington and Small Ships and Diving, Royal Naval Command: Commodore in Chief. It's a significant loss for a royal who served in Afghanistan during his time in the British Army.

Harry and Meghan initially proposed in a bombshell announcement released via Instagram and a new SussexRoyal.com website that they would simply "step back" as senior members of the royal family and work to become "financially independent," but after high-stakes negotiations with Harry's family and palace officials, Meghan and Harry's exit from royal life became more stark.

"What I want to make clear is we're not walking away, and we certainly aren't walking away from you," Harry said Sunday. "Our hope was to continue serving the queen, the commonwealth, and my military associations, butwithout public funding. Unfortunately, that wasn't possible."

"I've accepted this, knowing that it doesn't change who I am or how committed I am," he said. "But I hope that helps you understand what it had to come to, that I would step my family back from all I have ever known, to take a step forward into what I hope can be a more peaceful life."

"You've looked out for me for so long, but the media is a powerful force, and my hope is one day our collective support for each other can be more powerful because this is so much bigger than just us," Harry said. "It has been our privilege to serve you, and we will continue to lead a life of service."

"We are taking a leap of faith. Thank you for giving me the courage to take this next step," he said.

In a moment of levity in his speech, Harry also thanked supporters for the excitement they've shown for Archie, whom he said recently saw snow for the first time and "thought it was bloody brilliant."

Archie and Meghan have remained in the Vancouver area of Canada while Harry has been in the U.K. negotiating their family's future. It is expected that Harry will join his wife and son soon, but he is still attending to royal duties in the U.K.

In addition to attending the Sentebale benefit Sunday, Prince Harry met with world leaders Monday at the U.K.-Africa Investment Summit hosted by the U.K. government. Harry and Meghan visited Africa last year in what appears to be, at least for the foreseeable future, their last official royal tour of a foreign country.

Harry is not expected to join an evening reception Monday night at Buckingham Palace for the summit hosted by his brother and sister-in-law, Prince William and Kate, the Duchess of Cambridge.
Report a correction or typo
Related topics:
abc newsnational
Copyright © 2020 ABC News Internet Ventures.
More Videos
From CNN Newsource affiliates
TOP STORIES