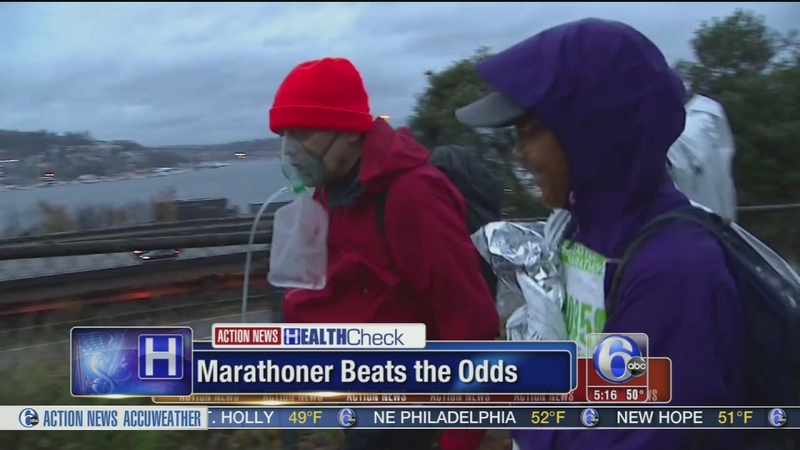 SEATTLE, Washington (WPVI) -- A man with a terminal lung disease beat his own expectations and finished the Seattle Marathon, despite needing oxygen the whole way.

Step by step, Evans Wilson is proving to the world that he can make a difference.

"Well, I'm feeling pretty good right now," said Wilson on Sunday, as he tackled all 26.2 miles of the Seattle marathon.

By his side were oxygen tanks and his wife Alicia.

"We're trying to make the last leg in," she said.

He's beating the odds, surviving both diseases for the past five years, when most people only make it for three.

"It's the most important marathon of his life," Alicia said.

Wilson used to be a competitive runner, running a mile in less than five minutes.

On Sunday, he was expecting to finish the entire marathon, no matter how long it took.

With each step, Wilson is trying to get the word out about pulmonary fibrosis and raise money for a cure.

Runner Julia Lager-Mesulam joined up with Wilson and his wife to show her support.

"My father passed away from pulmonary fibrosis three years ago," Lager-Mesulam noted.

"The last two miles are going to be tough," a determined Wilson said.

It was a physically grueling and exhausting endeavor, but as he rounded every corner, he came a little closer.

Then, during that finally stretch, there was a whisper.

A crew was there to welcome him with open arms.

"Best part of today is being done," Wilson said, relieved.

Wilson hopes he made a difference, by bringing in more donations for research he says is desperately needed and drastically underfunded.

He hopes people will continue to contribute to his campaign so he can raise more than $50,000, and awareness about his terminal lung disease.