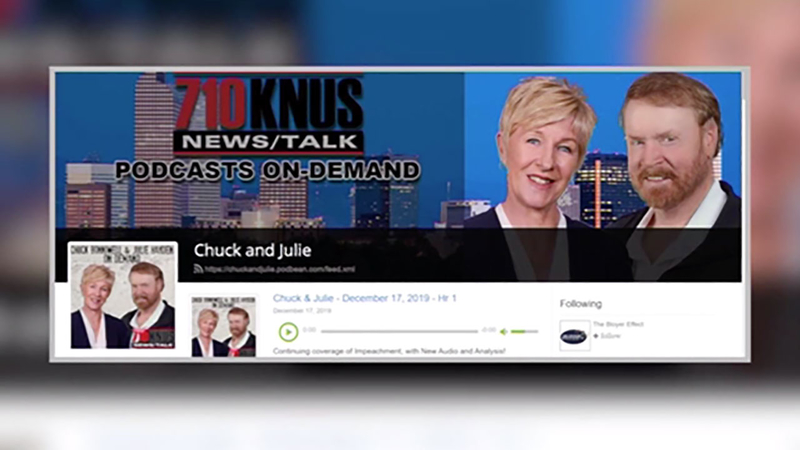 DENVER, Colorado -- A Colorado radio show host was fired after saying he wished for "a nice school shooting" to distract from the "never-ending" impeachment of President Donald Trump.

Chuck Bonniwell made the comments Tuesday on his show "Chuck & Julie," which he co-hosted with his wife Julie Hayden on 710 KNUS, a local talk radio station in Denver.

He began to imply that he wanted a school shooting to drive attention away from the impeachment vote, but his wife quickly interrupted.

Bonniwell then backpedaled, saying he'd prefer a shooting "which no one would be hurt."

"Given the history of school violence that has plagued our community, 710 KNUS confirms that an inappropriate comment was made on the Chuck & Julie show by co-host Chuck Bonniwell," the radio station said in a statement.

OFFICIAL STATEMENT:
Given the history of school violence that has plagued our community, 710 KNUS confirms that an inappropriate comment was made on the Chuck & Julie show by co-host Chuck Bonniwell. A programming decision was made to end the program immediately.

Denver suburb Littleton is home of Columbine High School, where 13 were killed in a 1999 massacre, and at a nearby movie theater in Aurora, a gunman opened fire during a 2012 screening of the 'Dark Knight Rises," killing 12 and injuring dozens.

ABC News reported that the show's canceling came just hours after the father of another local school shooting victim spoke out.

John Castillo's son Kendrick was killed in May during an attack on STEM School Highlands Ranch south of Denver, and he told ABC News Bonniwell should be fired.

"I'm furious that anybody in media or politics would suggest a school shooting to distract from a presidential impeachment or any other rhetoric in the media," John Castillo said. "This is totally unacceptable inexcusable and wrong."
Report a correction or typo
Related topics:
politicscoloradoimpeachmentschool shootingu.s. & world
Copyright © 2022 WPVI-TV. All Rights Reserved.
TOP STORIES
30th St. Station worker recalls stabbing: 'I sprayed him with Windex'
Mom hears late son's heartbeat in 14-year-old boy for 1st time
US to release monkeypox vaccine from national stockpile: CDC
Pa. parents, students push for AAPI education in K-12 classrooms
McCormick sues over counting mail ballots in Pa. Senate race
Brendan Langley, fmr. NFL player, gets in scuffle at NJ airport
Phillies adding another $1 dog day thanks to reporter, senator
Show More
NFL QB Dwayne Haskins legally drunk when he was hit, autopsy shows
3 teens injured in shooting near school in Tioga-Nicetown
Man stabbed in Northern Liberties, police say
AccuWeather: On The Cool Side
Bruce Springsteen and E Street Band to tour in US, Europe
More TOP STORIES News