Student's iPhone explodes in his back pocket, catches fire during class 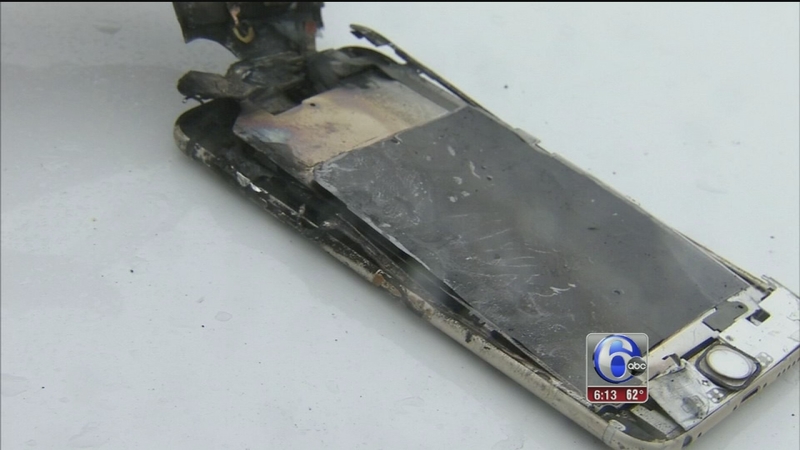 MT. LAUREL, N.J. (WPVI) -- It was a scary scenario for Darin Hlavaty, a student at Rowan College at Burlington County, after he says his iPhone 6 Plus exploded in his back pocket, burning a hole in his jeans.

"I felt this crazy, hot burning in my leg," said Hlavaty.

Hlavaty had just been reaching for a pen in his 9:30 a.m. physical science class.

"Right as class was starting, my phone started smoking in my pocket. It was a fire," said Hlavaty.

"Out of nowhere, we heard a fizzing and a popping sound. Suddenly a great mass of smoke comes out from his pocket," said Rebecca Bookbinder, student.

Classmate Rebecca Bookbinder had been sitting nearby.

"Everyone was kind of like, 'What is that? What is that? And then we all realized that's his phone that combusted in the middle of class," said Bookbinder.

"It was super hot so I flinched, grabbed it, threw it on the ground. Had to kick it because it was on fire," said Hlavaty.

A school spokesperson confirmed a teacher called public safety for a report of a burning phone around 9:45 a.m.

A spokesperson from the college says when public safety arrived the fire was already out, but they could still smell the smoke. The students were moved to a different classroom for rest of the period.

Recently Samsung recalled its Galaxy Note 7 smartphones after finding some batteries had exploded or caught fire. Apple says they can't comment at this time, but will investigate the claim as customer safety is of the utmost importance.

Hlavaty said the phone battery was dead and it was not plugged in.

"I've had it for about six months. The only thing that was wrong with it was a simple crack, but I don't see a simple crack causing it to blow up in my pocket," said Hlavaty.

As for Rebecca, she says her classmate is lucky he wasn't hurt.

"If you were on a phone call, had been sitting on your bed near a stack of papers, it could do a lot more damage than just burning a hole in your pocket. He's very fortunate," said Bookbinder.
Related topics:
mt. laurelexplosionnew jerseyiphoneapple
Copyright © 2022 WPVI-TV. All Rights Reserved.
TOP STORIES
DA: Person shot, killed by officer after struggle in Malvern, Pa.
CDC advisory panel greenlights booster shots for children ages 5 to 11
Rihanna and A$AP Rocky welcome their first child
What is monkeypox? What to know after US confirms 1st 2022 case
Eagles have a loaded roster, but will QB hold them back?
Delco bus driver accused of taking upskirt photos of students
Rise in brazen thefts force convenience stores to close
Show More
Blasian Solidarity unites Philly's Black, Asian communities for good
5 people shot in North Philadelphia near Temple University
Ford recalls SUVs due to engine fire risk
Newlyweds mark big day with fiery stunt
Video shows gunman wanted for shooting pregnant woman in West Philly
More TOP STORIES News