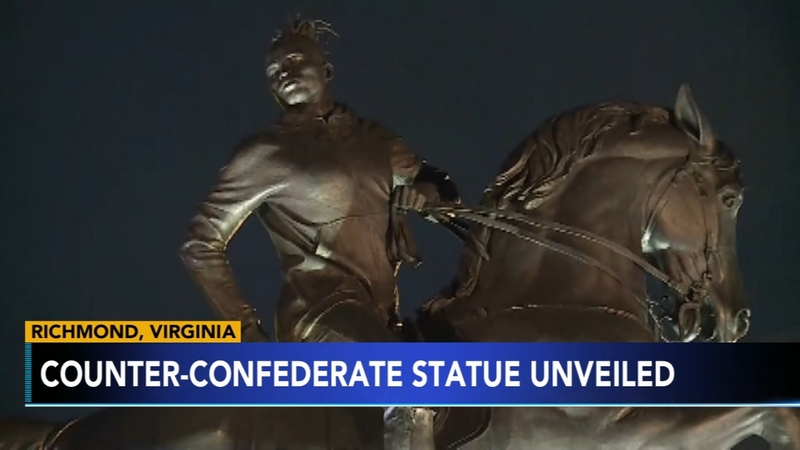 RICHMOND, Virginia -- A monument of a young African-American man has found its permanent Virginia home near the confederate statue it was modeled after.

The monument is "the artist's direct response to the ubiquitous Confederate sculptures that populate the United States," the museum said.

The statue comes in the midst of a nationwide debate surrounding whether to memorialize the Confederacy. In 2017, white nationalists marched to protest the removal of a Robert E. Lee statue in Charlottesville, Virginia, resulting in violent clashes and the death of Heather Heyer.

"It's taken more than 100 years, but the rest of Richmond's residents finally have a monument of a man on a horse who looks more like them," Richmond Mayor Levar Stoney told the station.

The unveiling was attended by Wiley, mayor Stoney and Virginia Governor Ralph Northam, the station reported. The moment had a hiccup when the tarp got stuck and needed some extra effort to be removed.

"This is so important in this special year, when we commemorate the 400th year anniversary of the first enslaved Africans who arrived on these very shores. We ignored this history for too long in our classrooms," Northam said. "Now, we are changing, and Virginia is better for it."

The monument, Wiley's largest work to date, was first unveiled in Times Square in September.

Wiley, a graduate of Yale University's School of Art, spoke at that unveiling, saying the story started with going to Virginia and "seeing the (Confederate)monuments that lined the streets."

His work mimics the equestrian portraiture of Confederate statues such as that of Gen. James Ewell Brown "Jeb" Stuart in Richmond, Virginia, according to a statement from the Times Square Alliance, a nonprofit organization that promotes Times Square.

"I'm a black man walking those streets," said Wiley. "I'm looking up at those things that give me a sense of dread and fear. What does that feel like -- physically -- to walk a public space and to have your state, your country, your nation say 'this is what we stand by'? No. We want more, we demand more, we creative people create more. And today, we say yes to something that looks like us, we say yes to inclusivity."
Report a correction or typo
Related topics:
societyartstatueafrican americansu.s. & worldconfederacy
TOP STORIES
Sharon Hill Council votes to fire officers charged in fatal shooting
Man arrested after firing 8 shots at Philadelphia officers
Man charged with murder in deadly Old City pipe beating
Missing mother last seen the day her roommate was murdered
Fairmount fire survivors describe terrifying scene, last-minute escape
Montco restaurant can reopen as officials investigate Hep A outbreak
CPSC issues warning on infant loungers
Show More
Del. man accused of taking upskirt photos of girl at Walmart
Man turns art into profession after football career abruptly ends
Bob Saget's widow reflects on comedian's last days
FBI issues new warning on QR codes
Convicted councilman resigns from Philadelphia City Council
More TOP STORIES News