The plan is for astronaut Mark Vande Hei to land in Kazakhstan with two Russian cosmonauts on a Russian spacecraft.
ABCNews
By Tommy Brooksbank, Jon Schlosberg, Haley Yamada, Gio Benitez and Gina Sunseri 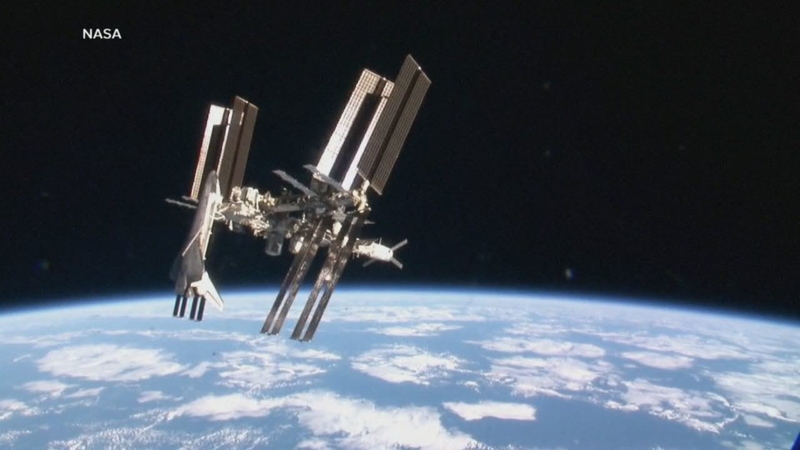 HOUSTON -- For the past 24 years, the U.S. and Russia have worked together to construct and maintain the International Space Station, where research has led to some of the most important discoveries of the 21st century.

Now, 227 miles below the unrivaled laboratory, Russia has waged a war in Ukraine that's pitted the country against the U.S. and its allies -- leaving the future of the ISS in question.

"When you're in space and you're flying around the Earth at 17,500 miles an hour and in a very hazardous environment, cooperation is the most important thing," said former astronaut Scott Kelly.

The ISS is divided into two sections: the Russian Orbital Segment operated by Russia and the United States Orbital Segment run by the U.S. American and Russian astronauts were the first to step inside the ISS in 1998.

From there, the partnership has continued. When the U.S. shuttle program ended in 2011, U.S. astronauts like Cady Coleman relied exclusively on Russian rockets to get her on board the station.

Coleman said once on board the craft, where you came from didn't matter, and it was all about how to work and live with one another.

"Space is hard and space is dangerous. And in my experience ... with our Russian partners it means sitting down, having a meal together," said Coleman. "It means talking about what's hard for you, what's hard for them and how together we can get this accomplished. [We] look each other in the eye and realize that we're all about the same thing."

Coleman said that American astronauts and Russian cosmonauts would cooperate on everything from life-or-death missions to the mundane.

"I was up there with the three Russian cosmonauts," said Coleman."[We] share a goal of exploring space ... and that goal doesn't change whether we're on the Earth or living up on the space station."

NASA's reliance on Russian rockets ended in 2020 when SpaceX debuted its Crew Dragon Capsule, but talks are underway to allow Russians on future SpaceX flights.

Russian cosmonauts continue to train at NASA's facility in Houston.

Astronaut Mark Vande Hei, who holds the ongoing record for longest space flight, is set to end his 355 days in space in just three weeks. The plan is for him to land in Kazakhstan with two Russian cosmonauts on a Russian spacecraft.

Babies Lenny and Moishe were born premature at a hospital in Kyiv on Feb. 25, the second day of Russia's invasion.

Shortly after the remarks, NASA released a statement on U.S.-Russian civil space cooperation, saying that "no changes are planned" and that the agency will continue to support "ongoing in orbit and ground station operations."

Dmitry Rogozin, the head of Russia's Space Agency and a close ally to Russian President Vladimir Putin, responded to Biden in a series of hostile tweets. On Feb. 26, he posted a video in Russian that threatened to leave Vande Hei behind in space and detach Russia's segment of the space station altogether.

Kelly said he felt compelled to speak up and engaged with Rogozin on Twitter.

"I was just enraged that he, the [cosmonauts], said that they were going to leave an American crew member behind. I never thought I would ever hear anything so outrageous," said Kelly.

NASA has remained silent on Rogozin's threats to abandon Vande Hei in space. Prior to the conflict in Ukraine, Russia had announced plans to pull out of the space station as early as 2025.

Although war continues to wage on Earth, Kelly said he hopes that the U.S.-Russian partnership in space can be mended.

"I've known [people at the Russian Space Agency], many of them for well over two decades, I trust them. I've literally trusted them with my life before," said Kelly, who added that the U.S. should still "prepare for the worst" and "hope for the best."

Kelly said the ISS is an example of where peace is possible because all astronauts share a common goal: to explore and learn.