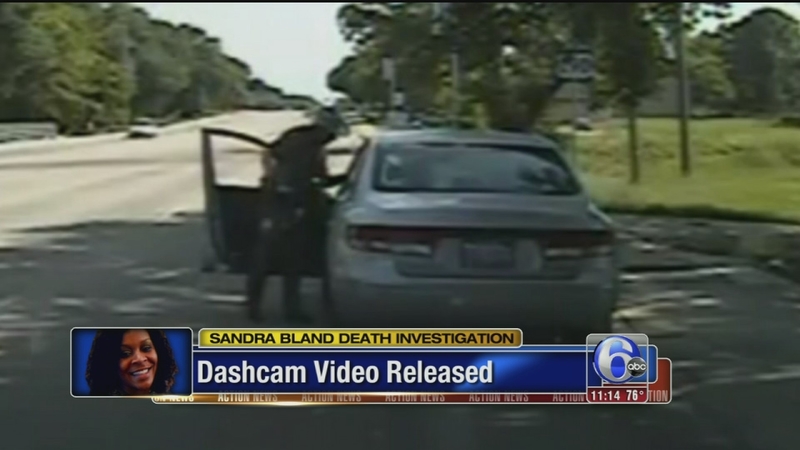 HEMPSTEAD, Texas -- A police dashboard video released Tuesday shows how a routine traffic stop escalated into a shouting confrontation between a Texas state trooper and a woman who was later found dead in her jail cell.

The video posted by the Texas Department of Public Safety on its website shows the trooper stopping Sandra Bland for failure to signal a lane change. After he hands her a ticket, the trooper remarks that Bland seemed irritated.

Bland replies that she is irritated because she had changed lanes to make way for the trooper's car.

The conversation quickly turns hostile when the officer asks Bland to put out her cigarette and she insists that she can smoke in her own car. The trooper then orders Bland to get out of the car. She refuses, and he tells her she is under arrest.

Further refusals bring a threat from the trooper to drag her out of the vehicle. He then pulls what appears to be a weapon and says, "I will light you up."

When she finally steps out, the trooper orders her to the side of the road. There, the confrontation continues off-camera but is still audible as the two yell at each other and the officer puts her in handcuffs and waits for other troopers to arrive.

The operators of the jail where Bland died have acknowledged violating state rules on guard training and the monitoring of inmates.

The Waller County Jail, about 60 miles northwest of Houston, is under investigation in the death of Sandra Bland, a Chicago-area woman whose family disputes authorities' finding that she hanged herself with a plastic garbage bag in her cell.

The Texas Commission on Jail Standards last week cited the jail for not providing documents proving that jailers in the past year had undergone training on interacting with inmates who are mentally disabled or potentially suicidal.

The citation also showed that jailers fell short by not observing inmates in person at least once every hour.

The sheriff's office said Friday in a statement that jailers checked on the 28-year-old Bland via intercom on one occasion rather than in person.

Commission Executive Director Brandon Wood has declined to say if the citation is related to Bland's death. But sheriff's officials mention her when explaining the violations, noting that they don't believe "either one of these deficiencies had any part in the death of Ms. Bland."

The Texas trooper who pulled Bland over for failing to signal a lane change said in an affidavit that after handcuffing her for becoming combative, she swung her elbows at him and kicked him in his right shin.

In the affidavit released Tuesday, trooper Brian Encinia said he then used force "to subdue Bland to the ground," and she continued to fight back. He arrested her for assault on a public servant.

Bland was taken to the jail on July 10 and found dead in her cell July 13.

Texas authorities said last week that the trooper violated procedures and the Department of Public Safety's courtesy policy during the traffic stop and was placed on administrative leave.

Encinia has been a trooper for just over a year.

A Texas Rangers investigation into Bland's death is being supervised by the FBI.

Although a medical examiner has ruled Bland's death a suicide, supporters insist she was upbeat and looking forward to a new job at Prairie View A&M University, where she graduated in 2009. Bland's family and clergy members have called for a Justice Department probe, and an independent autopsy has been ordered.

However, Bland posted a video to her Facebook page in March, saying she was suffering from "a little bit of depression as well as PTSD," or post-traumatic stress disorder. Family members have said nothing in her background suggested she was mentally troubled, and at least one friend said she was just venting after a bad day.

Her death comes after nearly a year of heightened national scrutiny of police and their dealings with black suspects who have been killed by officers.

The case has resonated on social media, with posts questioning the official account and featuring the hashtags #JusticeForSandy and #WhatHappenedToSandyBland. Others referred to #SandySpeaks, the hashtag Bland used in monologues she posted on Facebook in which she talked about police brutality and said she had a calling from God to speak out against racism and injustice.

Court records show Bland had several encounters with police in both Illinois and Texas over the past decade, including repeated traffic stops and two arrests for drunk driving, one of which was later dismissed.

She was also charged twice with possession of a small amount of marijuana. A 2009 case was dismissed, but she pleaded guilty last year to the other charge and was sentenced to 30 days in jail.

A decade earlier, in June 2004, Bland was charged with one count of retail theft of less than $150 in Elmhurst, Illinois. She pleaded guilty and was fined.

A video from the jail shows a period covering about 90 minutes with no activity in the hallway leading to Bland's cell. The video does not show the inside of her cell or even her cell door.