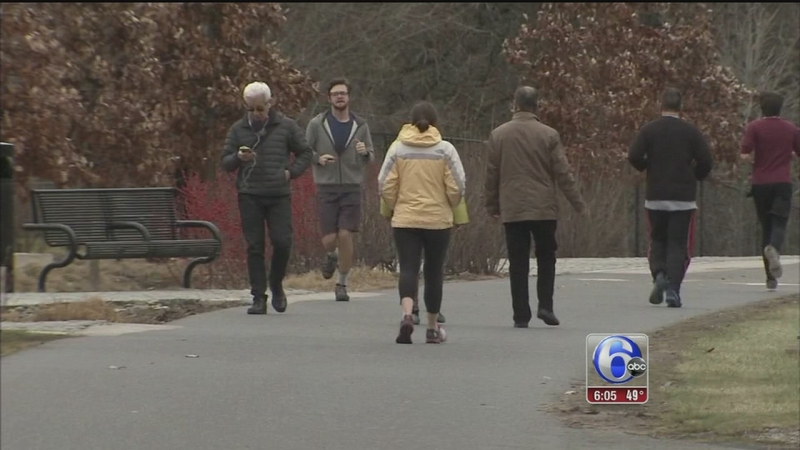 SPRING GARDEN (WPVI) -- Philadelphia police say four teens are in custody, after an attack along the Schuylkill River Trail on Wednesday.

All of the cases this week involved 4 or 5 young men, some on bikes, and carrying a BB gun that looks real.

Residents tell Action News that the attacks had been happening for months, but when police beefed up patrols, they stopped.

But on Sunday, the teens were back. The brazen group approached two males separately, only minutes apart after 8 p.m., and showed what looked like a gun demanding cash and cell phones.

And then Wednesday night, not far from Sunday's crimes, they approached two men and again showed what looked like a weapon - this time one of the victims refused to unlock his phone and things got violent.

Lt. Stanford tells us, "The simple fact that this man handed over his items - his cell phone, bag, I believe a laptop or something along those lines - and he refused to unlock the phone. And to begin to punch and kick this individual, again, is barbaric."

9th District officers quickly caught up with two of the suspects and found them with the victims' phone and a BB gun.

We caught up with a group of runners who say they've had issues with groups of kids on bikes, but they've never been robbed and they are always aware of their surroundings.

Councilman Kenyatta Johnson is leading a task force to make the trail safer.

Johnson tells us, "We have increased the lighting along this trail, mile markers. In the future we're gonna focus on cameras as well as telephones. Incidents like this shouldn't take place while people are enjoying the trail and recreation time."

Those cameras would go up at key entrance points on the trail. There are also plans to start a town watch - a citizen patrol just for the trail.