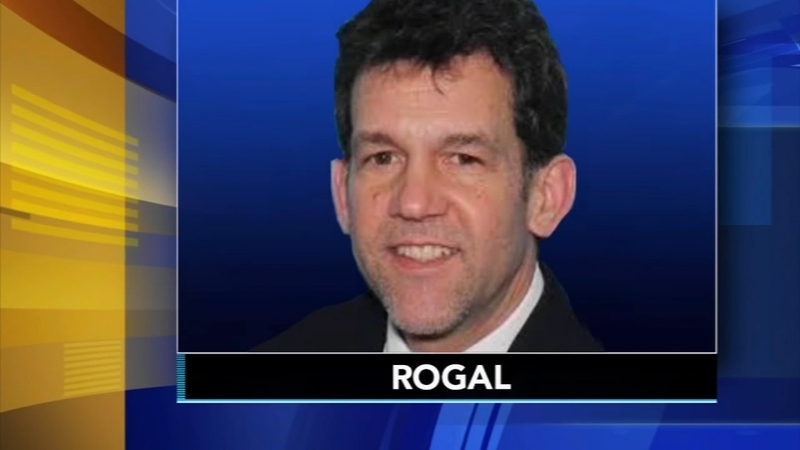 WEST BRADFORD TWP., Pa. (WPVI) -- A man who fired at his ex-wife and then killed his parents took his own life following a police chase in Chester County, according to the District Attorney.

"This was a man with a grudge against the world," D.A. Tom Hogan said during a Wednesday morning press conference.

Officials described 59-year-old Bruce Rogal as an unemployed man who had problems with his family.

In 2015, Rogal allegedly struck his wife leading to her getting a protection of abuse order against him. He surrendered his guns, but then he got them back when the protection expired in 2017.

The couple was married a long time and had a son, now 27-years-old, officials said.

His wife also filed a divorce proceeding in 2015. It took three years, but the divorce was finalized last week. In the judgment, the family home was awarded to his now ex-wife.

As for his parents, according to people who knew Rogal, he blamed his 87-year-old mother Nancy for dropping him out of a bassinet when he was a baby, Hogan said. Rogal felt his father, 89-year-old Walter, treated him too tough.

Hogan said Rogal's parents bought a vacation property in Warren County, New York when their kids were younger. When they sold the home, they split it up the money among the kids.

Hogan said Rogal got the money to live on, but continued to complain about his family.

"He's checking various ways to get in and get out. That's somebody who is planning to do something at that residence," Hogan said.

On September 19, at 4:54 p.m., officials said Rogal left his Glenmoore residence and got into his 2002 silver Honda Odyssey minivan with two guns, including a semi-automatic rifle.

According to the D.A., around 5:45 p.m., Rogal drove to his ex-wife's home and, as she was in the driveway changing the oil in her car, he fired six shots at her.

She ran down the street and went into a neighbor's house. She was not hurt in the incident, but Hogan said some of the bullets hit nearby houses.

Rogal then got back into the car and took off, Hogan said.

At that time, the ex-wife and the neighbors called 911. Downingtown police were first to arrive to the scene. State police then took the the wife to police barracks.

Hogan said Rogal's ex-wife called her son and told him, 'Your father just shot at me.'

The son, who also lived at the West Bradford house, was at 30th Street Station in Philadelphia on his way home. His mother told him not to come home.

"'It's not safe. Go someplace else,'" Hogan said she told her son.

While at the train station, the son texted other members of his family to let them know what was going on, Hogan said.

It was around 6:15 p.m. when the son called his grandparents, who lived at Bellingham Retirement Community in East Goshen. He got his grandmother Nancy on the phone.

"He was telling his grandmother 'you're in danger. My father is on the loose. He shot at my mother. You guys need to be concerned,"" Hogan said.

Hogan said as he was talking his grandmother, the phone went silent.

"All of a sudden his grandmother is not there and there is nothing on the end of the line," Hogan said.

The son called Bellingham to check on his grandparents. Hogan said the executive director went up to the room and found the elderly couple sitting in recliners. He then realized they were both dead from shots to the head.

"We now have a killer on the loose and we don't know where he is," Hogan said.

Hogan said SWAT units were sent to Rogal's Glenmoore home with a search warrant. He was not there, but authorities recovered ammunition and empty gun boxes.

After news reports went out of the manhunt, one of Rogal's friends in western Chester County called police and told them he was with Rogal between 7:30 p.m. and 8:30 p.m., Hogan said. The time period was after he allegedly killed his parents.

"His friend said he acted like nothing happened," Hogan said.

State police then saw Rogal's vehicle going in the opposite direction on the road they were driving on. They followed and as soon as police hit the lights on their vehicle, Rogal sped away and a high speed pursuit began, Hogan said.

Rogal drove back to his ex's home in West Bradford Township where he crashed into the side of the house. Troopers got out of their vehicles with their weapon drawn.

Hogan said they could see Rogal with the rifle. They commanded him to drop the weapon, but he did not respond. Then troopers saw him start to turn toward them with the weapon. trooper then began firing.

The SWAT team arrived with a BearCat. With shields in hand, they approached the vehicle to confront the suspect. Hogan said they pulled him out of the vehicle and that's when they saw he was already dead.

Hogan said the autopsy showed he was dead from a gunshot wound to the head with the rifle.

"He killed himself, it appears, right after he rammed into the house," Hogan said.

Some of the shots fired by the state police may have nicked him, Hogan said, but did not kill him.

Hogan said it is not clear which grudge set Rogal off to go on this rampage.

"The only person who knows why he did what he did was Bruce Rogal," Hogan said.