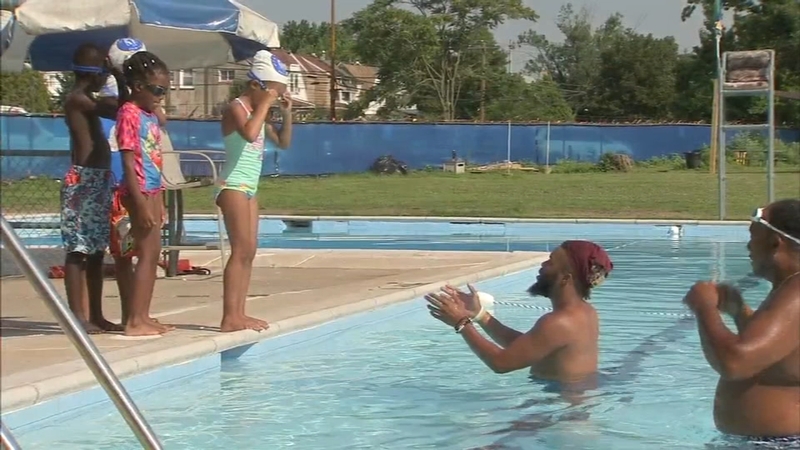 YEADON, Pa. (WPVI) -- Free swim and water safety clinics will be offered in Yeadon, Delaware County on Saturdays in July and August.

They will be held at The Nile Swim Club on the 500 block of South Union Avenue.

The Saturday offerings come on the heels of a free, two week clinic in June, where 75 children learned to swim.

Certified water safety instructor Terrence Satterfield said, "It's not that they don't want to learn the skills, it's just that a lot of times they don't have access. It might be a financial reason."

The clinic is called 'No Child Will Drown in our Town.'

When the clinic first started, some children were fearful, like 6-year-old Kasin Marian.

But all that changed.

According to the Centers for Disease Control, drowning remains the second-leading cause of unintentional injury-related deaths, with children from 1-4 with the highest drowning rates. Drowning rates among African Americans are higher.

Board member Lisa Ivery explained,"If you look at the statistics for African American children- we are leading the way. We don't want to lead the way in that statistic."

Ivery continued, "So, we feel it's critical for African American children- and quite frankly every child- to know how to swim."

The Saturday clinics will include children, and adults like Keisha Robinson.

"I want my kids to see that I'm also willing to learn the importance of swimming," Robinson told Action News.

The club is hoping that with additional donations, they can schedule more two-week clinics next summer.

The Nile, which opened in the 50s, is the first African-American owned and operated swim club in the nation.

The club fell on hard financial times in recent years.

Earlier this year, two Delaware County natives, Sam Patterson and Mike Pearson, helped save the club, pledging $130,0000 to pay off back taxes and improve its facilities.