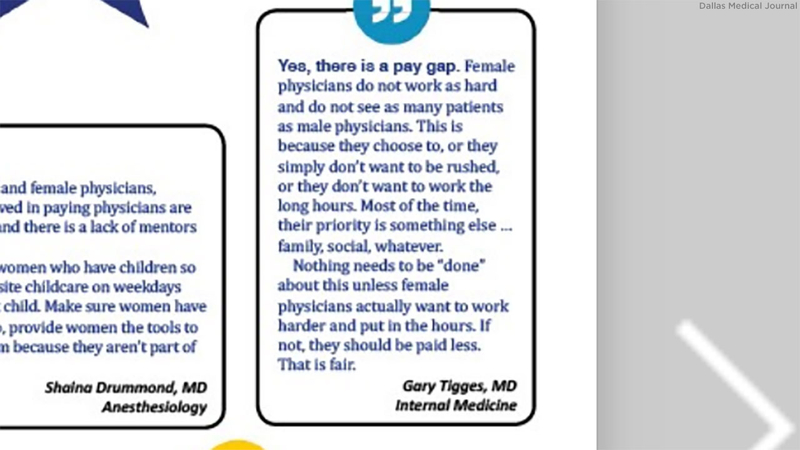 PLANO, Texas -- A Texas physician has apologized for a remark claiming that female doctors "do not work as hard and do not see as many patients as male physicians."

The comments from Plano internist Gary Tigges were published in the September Women in Medicine issue of the Dallas Medical Journal.

"We asked our physicians if they believe a pay gap exists between male and female physicians. If so, what is the cause? What steps can physicians take as individuals and as a community to address this?" the journal asked its members.

Tigges' response continued, per the journal's online edition: "This is because they choose to, or they simply don't want to be rushed, or they don't want to work the long hours. Most of the time, their priority is something else.... Family, social, whatever. Nothing needs to be 'done' about this unless female physicians actually want to work harder and put in the hours. If not, they should be paid less. That is fair."

1) #medtwitter, let’s take a look at the other responses besides Gary Tigges, because he isn’t the only misguided one on here pic.twitter.com/oFhpfBL0SD

@DallasCMS In the Women in Medicine issue Dr Tigges is quoted voicing his misogynistic view of his women colleagues. The title of the page is “Big and Bright Ideas”, but his is definitely not bright. This is how men convince themselves that discrimination against women is okay. pic.twitter.com/0pUTHIabzW

After his comments were widely circulated and criticized on social media, Tigges posted a statement on his practice's website apologizing for his remarks:

I have heard from several trusted female physician colleagues who disagree with and are deeply hurt and offended by the comments I made to the Dallas Medical Journal regarding pay equity among female and male physicians.

I want to thank them for reaching out to me and sharing their concerns. I now understand more clearly how intricate this issue is and that there are ways we can work together to resolve these disparities.

I have worked closely with numerous female physicians for nearly three decades and have witnessed nothing but compassion, diligence and professionalism.

I sincerely apologize to all female physicians for my comments and the pain they have caused.

I also need to apologize to my partners and the staff at Plano Internal Medicine Associates, where we have an open and supportive work environment and where we do not tolerate discrimination based on gender, race, ethnicity, sexual orientation or religion.

Tigges told the Dallas Morning News that he submitted his comments unaware that they would be published. He said he'd read data claiming that female doctors see fewer patients and work fewer hours than their male counterparts, though he said women should be compensated equally for equal work.

The Dallas County Medical Society, which publishes the Dallas Medical Journal, issued a statement Saturday distancing itself from Tigges' remarks and reiterating that his statement does not reflect the views of the society.

"When I read this response, I was outraged, as many female physicians are today. However, I believe that to incite change, we must expose the issues that need changing," Gabriela M. Zandomeni, chair of the society's communications committee, wrote.