Man shuts down busy highway to propose to girlfriend 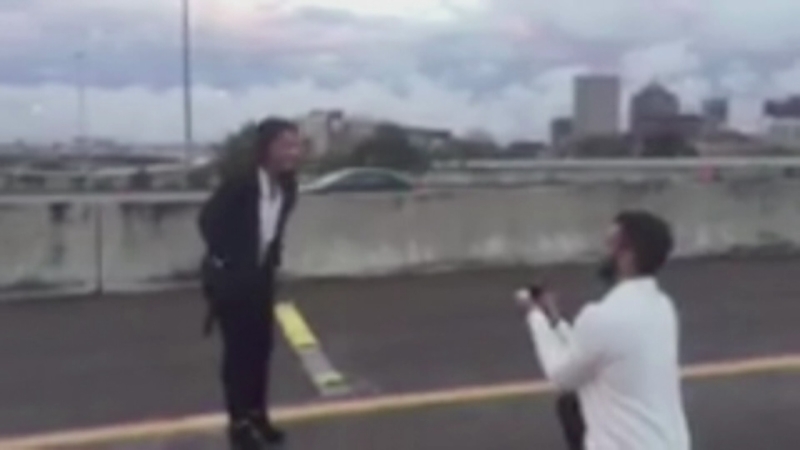 HOUSTON (WPVI) -- Love can make you do some crazy things, especially when you're young. But shutting down on of the busiest freeways in the nation to get on one knee and propose?

That's what one man did.

"We were meant to be with each other," said Vidal Valladares.

It's love story that starts at Cafe Layal in Houston, texas. Michelle Wycoff, 23, was at the cafe with friends. Valladares, 24, was waiting tables.

"I wanted to go talk to him so I acted like I had to go to the bathroom. He asked me for my number and asked me if he could take me out and I said sure," she said.

"This is a place where I took my girl on the second date. I stopped on my motorcycle and she loved the view," Valladares said.

It was the perfect view of Houston's lit up skyline. Wycoff fell in love with it.

Valladares fell in love with her. A year later and a half later, he decided to propose.

"I said, why not stop traffic for a couple of minutes and just propose right there," he said.

On a highway? Risky but worth it, said Vidal.

"I told my girl we were going to go to a white and black party. She was getting ready so I told her to go get her nails done too," he said.

He planned it for Sunday afternoon.

"I picked her up from the house and everybody followed me," said Valladares.

"It was my favorite view of downtown," said Wycoff.

Apprehensive, but Wycoff got out of the car.

"When I get out the car, all I see are my friends and family, taking their phones out," she said.

It was all captured on video. Valladares getting down on one knee, proposing in the middle of the highway.

"Then I started crying and I said will you marry me," said Valladares.

"I was in shock and I didn't know what to say," said Wycoff.

Somehow she fixed her lips to say yes.

"When she said yes, I felt like a champion, like I won the Super Bowl," said Valladares.

In hindsight, Valladares says he knows it was dangerous.

"Love makes you do stupid things and I wanted to do something big for my girl. Something that she will always remember," Valladares said.

No one was hurt during the traffic stopping proposal. Valladares is hoping police don't come for him.

They're planning their wedding for March. For now, it's a match made in Houston, right in the middle of I-45.

"I love him that's all I can say," said Wycoff.