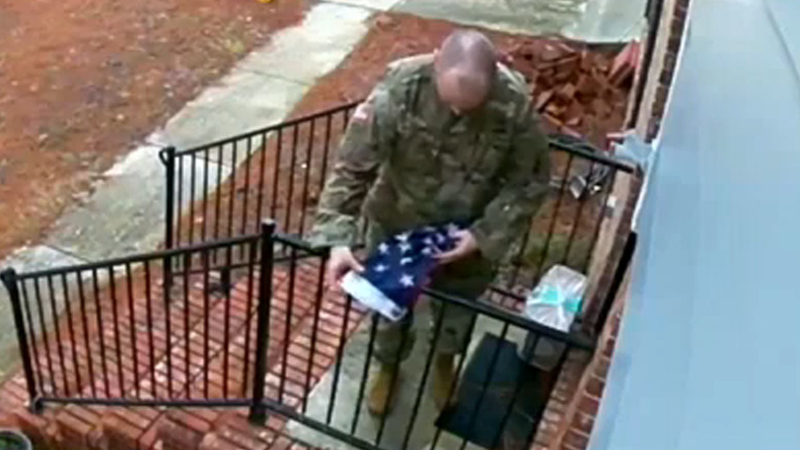 Man stops to fold flag that ripped from pole during storm

HOPE MILLS, N.C. -- A man walking by a North Carolina home noticed a flag torn from its pole and took action.

Frankie Grandstaff said his flag's rope was ripped from the pole during a storm this week.

Home security video showed the passing man, who was dressed in fatigues, properly folding the flag, then placing it to the side of the home's front steps.

Homeowner Frankie Grandstaff was away at work when the soldier approached his porch to fold the flag.

"It was just very cool to see the video and actually seeing it happen at our house," Grandstaff said.

"Luckily, my wife had an amazon package on the front porch that he could set it right on top of the amazon package," Grandstaff said.

The couple decided to post the video on Facebook to show their appreciation to the man in uniform.
EMBED More News Videos

A man walking by a Hope Mills home noticed a flag torn from its pole and took action.

"This is how important the American Flag is to our Military!" Grandstaff wrote in his Facebook post.

"He wasn't looking for attention. He didn't even know we had the cameras, you know, he just did it because he was doing the right thing," Grandstaff said.

An act of patriotism that Grandstaff believes more people need to show, despite their differences in beliefs or opinions.

"I pray to God that one day we will get to the point where, you know, we just treat everybody like we want to be treated," Grandstaff said.

Grandstaff hopes to learn the identity of the soldier, who he believes lives in his neighborhood, so he can show his appreciation.

"Picking up the flag for some people may not seem like a huge thing. But, you know, everything that he sacrifices, you know, day in and day out, that's just the ultimate sacrifice," Grandstaff said.

The NC homeowner intends to properly dispose of the damaged flag.