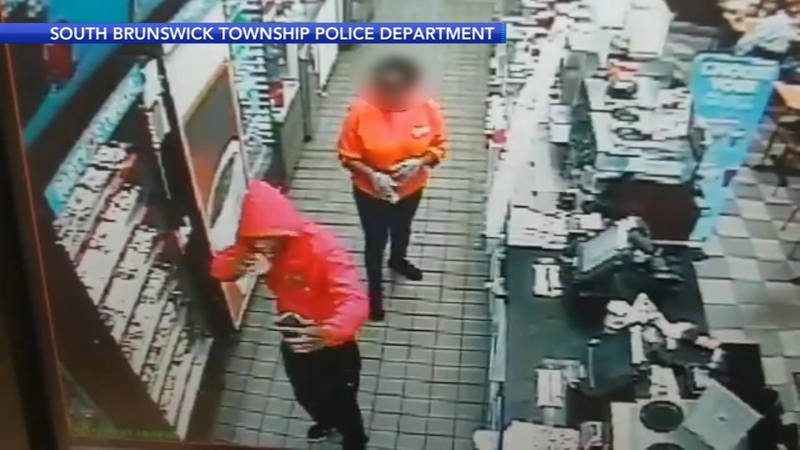 SOUTH BRUNSWICK TWP., N.J. (WPVI) -- Police in South Brunswick Township are searching for a criminal they dub the "Donut Desperado."

He was caught on surveillance camera dancing on the counter and eating donuts while live streaming on his phone at a Dunkin Donuts.

The suspect was wearing a red hoodie during the ordeal on Saturday, June 1 around 8:30 p.m.

Customers at the Dunkin Donuts on Georges Road saw the video and were in disbelief.

Police are still looking for the dancing, live streaming suspect, and released the surveillance video on Tuesday night, saying the suspect has struck once before.

On May 15, police say he did something similar at Cheng's Garden restaurant across the street.

Mike Liu, the manager at Cheng's Garden, said it was around lunchtime when the suspect came in, wearing the same red hoodie, live streaming on his phone.

"The guy was running into the restaurant," Liu said. "He was holding his phone shooting himself." He said, 'Oh you gave me bad fortune. You gave me a bad fortune.'"

Liu said he then ran through the kitchen, took a soda, left two dollars, and ran out.

He says even if it was a joke, it was unnerving.

We are aware of the matter that took place at the Dunkin' restaurant located in Monmouth Junction, NJ. The franchisee who owns and operates this location informs us that the safety and well-being of his crew members and customers are top priorities and he is cooperating fully with the police investigating this incident. As this is an ongoing investigation, we defer any additional questions to the local authorities.