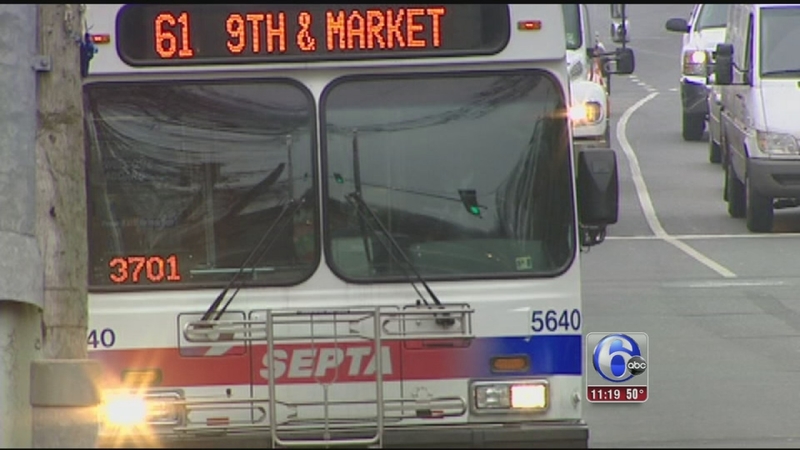 VIDEO: Investigation: Side mirrors a deadly flaw on SEPTA buses?

Could a mirror that's on every single SEPTA bus be to blame for dozens of serious knockdown accidents?

SEPTA bus drivers warn that the mirror is so big, it creates a dangerous blind spot.

Internal documents show that SEPTA has said the blind spot is an "acceptable risk," but the agency denies their buses are unsafe, or that the mirror is responsible for any accidents.

This comes in the wake of another deadly crash last month.

It was one turn at the corner of 15th Street and Washington Avenue one month ago that took the life of 29-year-old Sheena White.

"She said, 'Let's go,' because we had the right of way and then out of nowhere the bus just turned around the corner so fast," said Desmond Henry.

Henry, the victim's neighbor, was with White, when she and her 8-year-old son were struck.

"Not only did he lose his mother but he was right there with her, not realizing his mother was gone, trying to pick her off the ground, saying, 'Mother get up, get up," said Lakesha White, victim's sister.

The White family tells Action News that Sheena was struck head-on and dragged under the tires. Her son was hit and seriously injured.

"I just miss her I wish I could say this is a nightmare but I know it is not a nightmare," said Delores White, victim's mother.

"They need to fix this problem before somebody else's mother is crying before someone else's child is left without a mother," said Lakesha.

The issue is the left-side mirrors. They can measure 15x8 inches wide and create a blind spot.

Internal memos say that could cause drivers to lose sight of a pedestrian for approximately five feet - a deadly path for some.

"In my estimation there could be a thousand close calls a day out there," said Ed Ruth, former SEPTA bus driver.

Ruth says he warned SEPTA that another pedestrian could be killed in 2012. The union also started warning SEPTA about their concerns as far back as 2004.

"How many deaths does it take before someone says, 'SEPTA do something about your safety issue," said Carl Greer, union rep.

Videos obtained by Action News show the force of some knockdowns.

SEPTA conducted an internal study of the mirrors and confirmed "an operator can lose sight of a pedestrian for approximately 2 seconds."

However in that same report SEPTA called that "an acceptable risk." A study this year reported "up to 17 feet of crosswalk cannot be seen by the operator when executing a left hand turn."

"The way I define safety is to remove all risks - that's how safety is," said Greer.

"One incident is one too many and we don't accept an incident being something we just live with, which is why we are refitting the mirror," said Scott Sauer, SEPTA's Chief Officer of System Safety.

SEPTA announced first to Action News that starting in January they will be replacing the old 15x8 inch mirrors with new 12x 8 inch mirrors, but not because they say the mirrors are to blame.

"I am not going to say that the old mirrors are unsafe because they are not. The overwhelming factor in every incident has been human error," said Sauer.

In fact SEPTA says the current 15x8 inch Roscoe mirrors were originally installed at the request of the bus drivers, and says there will always be a blind spot.

"We've always been forthcoming that the mirror is large and it does create an obstruction and the operators do have to see around it," said Sauer.

As a result SEPTA teaches drivers the 'Rock-And-Roll' safety technique they say should prevent accidents like the one that took Sheena White's life.

"Move forward, and back, and right to left. To give myself the best vantage point of any pedestrian in the crosswalk," said Michael Liberi, Chief Officer of Surface.

But some bus operators disagree.

"You pretty had to stand up out of your seat to look around and literally you were climbing out of the seat which isn't a safe way to operate a vehicle at all," said Ruth.

While the cause of White's accident is still under investigation, SEPTA has picked up the cost of White's funeral. The family says they are trying to pick up the pieces of their lives.

"This needs to be the milestone for them to rectify these blind spots" said Lekesha.

SEPTA has paid out about $3.3 million for bus collisions with pedestrians since January 2011. More than half of that was a result of left turn accidents.

However SEPTA also provided Action News with records that show in arbitration that the bus drivers, and not the mirrors, were found to be at fault in those accidents.