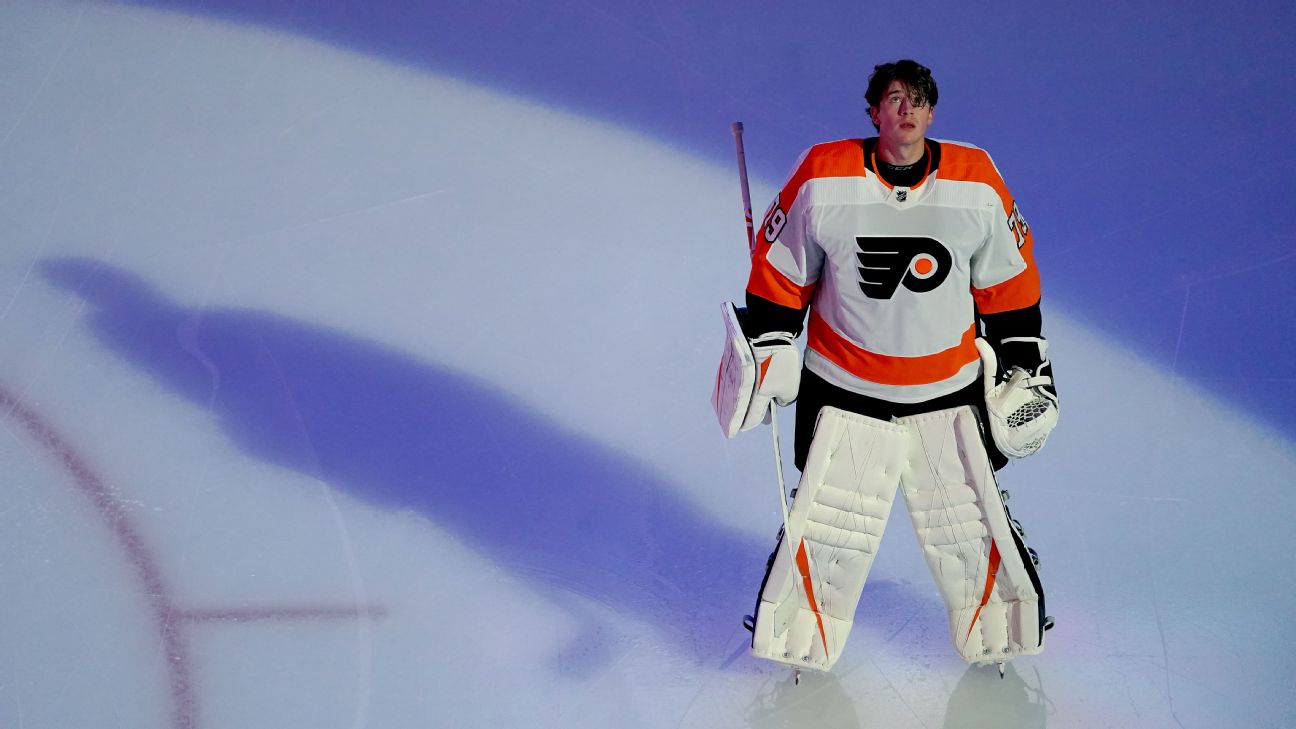 When Carter Hart was 10 years old, his parents wanted to get him a goalie coach. Another family recommended John Stevenson, who lived close to their home in Alberta. Stevenson is famous for working with Braden Holtby -- he was the first person the Capitals goalie mentioned on TV, moments after hoisting the Stanley Cup in 2018 -- and is also a sports psychologist.

"John would only see certain kids," Shauna Hart, Carter's mom, explained. "So he said, 'I'll meet with you and Carter, but if he's not focused, I'm not going to waste my time.'"


Hart got on the ice with Stevenson, and his mom waited in the car in the driveway. After an hour, Stevenson came out and asked Shauna to roll down the car window. "Ok," he said. "I'll work with Carter. Because he's so focused, it's scary."

"It's a great thing," Stevenson replied.

That's one of the many anecdotes that explain why Hart, at just 22 years old, is uniquely prepared for his current role: the Philadelphia Flyers' savior in net.

The Flyers once had a storied tradition of goaltenders, but not since Hall of Famer Bernie Parent in the 1970s have they had a long-term, reliable option in net. Pelle Lindbergh led the Flyers to the Stanley Cup Final in 1985 and won a Vezina Trophy that season. He tragically died in a car accident months later.

Since then, it has been desperation and an almost comical rotation for the Flyers. When Hart was called up in 2018-19, Philadelphia was in the midst of setting an NHL record by using eight starting goaltenders in one season.

Hart, who was drafted by the Flyers in the second round (48th overall) of the 2016 draft, has been viewed by both fans and management as the answer ever since. The Flyers are the Eastern Conference's No. 1 seed for the first time since 2000, and Hart's playoff debut has had a few rough patches, but he has always found a way to rebound. After being pulled in Game 2 against the Canadiens after allowing four goals, he posted back-to-back shutouts, making him the second-youngest goalie in NHL playoff history to accomplish that feat (following Detroit's Harry Lumley in 1945).

In Game 5, coach Alain Vigneault was ready to pull Hart yet again after he allowed four goals. But the Flyers challenged the goal for offsides and won; the goal was overturned. Vigneault summoned Hart to the bench. "I got the chance to look into Carter's eyes," Vigneault said. "And he was fine. He's played extremely well for us."

Hart stayed in. His teammates had the utmost confidence in him then, and they do for a bounce-back performance in Game 6 and beyond.

"It's a good thing he's a little too oblivious to some things," teammate Jakub Voracek said this week. "[Like] being a goalie in Philadelphia."


Among goalies with at least six starts in the 2020 Stanley Cup playoffs, Hart leads with a .944 save percentage and is third with a 1.64 goals-against average. Parent, the franchise legend, can't stop tweeting about Hart.

"He's really strong mentally," Voracek said. "He's a young kid that works really hard. He's pretty impressive the way he bounces back, even last year. If he had a bad game, he always came back, and he was strong. I think that's what good goalies do. Sometimes you have a tough night."

The series has been billed as a goaltender duel between Hart and his childhood idol, Carey Price. Although Hart has tried to underplay it -- he's extremely polished in spouting out team-first clichés -- there's undoubtedly a surreal aspect to it.

"Oh my gosh, Carey was his favorite goalie," Shauna Hart said. Hart's childhood bedroom was filled with Price memorabilia -- including a life-size poster his grandmother gave him for a birthday. One year, Shauna bought her son a Canadiens jersey for Christmas, and he often wore it as a practice jersey "for good luck."

"We also saved up to get him two or three pictures signed," she said. "Which he has in his bedroom downstairs."

Hart met Price for the first time recently, which he summarized as "something pretty cool." Hart is already well on his way, having become the youngest goalie to win his NHL debut since -- you guessed it -- Price in 2007. Hart also is the first goalie in NHL history to record multiple winning streaks of seven-plus games at the age of 21 or younger.

Hart was well-prepared for this moment, having shouldered the spotlight in two straight World Junior Championships for Team Canada. He thrived in that high-pressure setting, especially in 2018, when Canada won gold behind his 1.81 goals-against average and .930 save percentage in six games. He's also the first person to win the CHL Goaltender of the Year award twice -- and as one of the youngest players in the league.

"Think about it like this," said Shane Clifford, former Pittsburgh Penguins goaltending coach and a longtime coach and mentor to Hart. "If you go to your local high school football team, there's not one freshman or sophomore that probably starts on that team. Carter was a freshman playing against guys that were 17, 18, 19 and 20 years old. So when you're doing stuff like that, you're like, 'OK, there's something there with this kid.'"

Hart's skills have always been technically sound. Stevenson suggested that he take power skating classes at a young age, so he's a good skater. According to Clifford, Hart's shot preparation and ice awareness have always been strong. "Everything is there," Clifford said. "The only thing he really needed to adjust to was playing with better players."


The Flyers' veterans embraced Hart warmly. Last season, when the team told Hart that he'd be sticking around with the big club and that he could move out of the hotel, Voracek offered an empty, furnished apartment he had in the Old City neighborhood of Philadelphia. Voracek didn't charge Hart rent and even took the goalie shopping for a new mattress. Captain Claude Giroux and his wife, Ryanne, invited Hart over for home-cooked meals, including on Christmas.

Hart is likable because of his humility. During the NHL's coronavirus pandemic pause, Hart returned home to Alberta, where he spent most of his days cooking, baking and playing board games with his parents and younger sister. He met his two best friends in seventh grade, and their one vice is golfing. When Clifford visited Hart in Philadelphia during the season, he said the two went to a few low-key spots that Hart knows and likes. "Other than that, he's at home, playing guitar, watching Netflix," Clifford said. "So he's pretty boring."

During the playoffs, Hart has a tradition of calling his father the night before every game. He also has once-per-week FaceTime dates with his mother, as well as Parker Fowlds, the 79-year-old man who hosted Hart as a billet when he played for the Everett Silvertips in the CHL. (Hart bought Fowlds an iPhone as a Christmas gift).

The work with Stevenson helped Hart narrow in on some goals. "The biggest thing for me is: When you come into a new environment, a new situation with different people and things you're not used to, just controlling what you can control and worrying about yourself," Hart told ESPN in 2018. He deleted his Twitter account when he began playing professional hockey. During his brief time in the AHL, he practiced mindfulness breathing, listening to a 15-minute track each morning on feeling sensations in one part of the body and moving on from there. This past offseason, Stevenson taught Hart how to juggle with five balls -- a practical preparation, as there are usually five opposing skaters on the ice.

Stevenson also got Hart in the habit of writing his goals on pieces of paper, so he can visualize success. At 14, Hart wrote down his goal: "I'm going to make my midget Triple-A team."

Hart was cut from the team that year. His parents let him have a few days to be upset, then told him: "You can let this define you, or you can show them they were wrong."

Then his parents asked what he wanted his goal to be for next year: Make the Triple-A team?

Hart responded: "No, I'm going to get drafted by a WHL team." Sure enough, he was drafted into the WHL at age 15.

"It was never 'if I make the WHL' or 'if I make the NHL,'" Shauna Hart said. "It's always when I make it. And even now, when he's talking to his dad, it's 'when I win the Vezina Trophy,' 'when I win a Stanley Cup.'"
Report a correction or typo
Related topics:
sportsespnnhlcarter hartdailyprofilephiladelphia flyers
Copyright © 2021 ESPN Internet Ventures. All rights reserved.
More Videos
From CNN Newsource affiliates
TOP STORIES