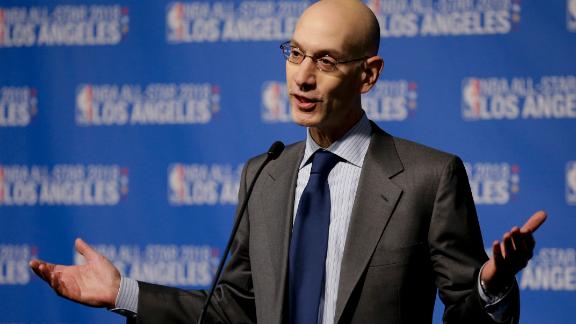 NEW YORK -- Commissioner Adam Silver said a North Carolina law that limits anti-discrimination protection for lesbian, gay and transgender people is "problematic" for the NBA, but there has been no discussion of moving the 2017 All-Star Game out of Charlotte.

Silver, fielding several questions about the NBA's stance on the North Carolina controversy during a news conference at the St. Regis Hotel, said he is sensitive to the situation, and it was discussed by owners, but there were no talks about moving All-Star Weekend.

"The best role for the league to play here is through constructive engagement towards change," Silver said of working "behind closed doors" to affect change of the law. "Not setting deadlines, not making ultimatums, but working with the private sector and government to affect change in North Carolina."

Silver knows how complicated the issue is for the NBA, with the Hornets playing in Charlotte.

"Where we find ourselves right now is that the current state of the law is problematic," he said. "... It would be easy, in a way, to grandstand here and say we are moving the All-Star Game, even though that game is not scheduled to take place for 10 months.

"We have a playoff game in Charlotte roughly a week from now, and I am not sure what statement we would be making about our team in North Carolina if we announce the All-Star Game would not be taking place in North Carolina, but our team continued to operate there."

Silver made it clear that the NBA -- which in 2014 had Jason Collins become the first openly gay athlete to play in one of the major professional sports leagues in North America -- does not tolerate discrimination of any kind.

"By no means are we saying we are stepping back," Silver said of moving All-Star Weekend. "The message is not that the current state of the affairs is OK for the league. Let me be clear: The current state of the law is problematic for the NBA in North Carolina. The discussion [with team owners] was how can we be most constructive in being a part of the process that results in the kind of change that we think is necessary. That is where we find ourselves."

North Carolina Gov. Pat McCrory recently filed an executive order that extends protections to North Carolina state employees based on sexual orientation and gender identity. However, he left intact the bulk of the law regarding rights for lesbian, gay and transgender people. Friday's announcement came as controversy over the law, which was signed by McCrory last month and proposes to limit protections for gay, lesbian and transgender people,continues.

Besides the Michael Jordan-owned Hornets, Silver noted that current NBA stars Stephen Curry and Chris Paul are from North Carolina.

"I've already explained how I feel about discrimination -- period. I think that's not tolerable nowhere,'' Curry said as Golden State practiced for its playoff opener in Oakland, California. "It sucks that it's in my home state, where a lot of great people live. The All-Star Game hopefully being in Charlotte will be a huge thing for the city. I know the NBA will make the right decision when it comes time.''

The All-Star Game is scheduled for Feb. 17 at Time Warner Cable Arena and could inject $100 million into Charlotte's economy, according to the Charlotte Observer.

"Ultimately, our interest is in conducting a successful All-Star Game in North Carolina and having a team that can play in North Carolina in a nondiscriminatory environment," Silver said. "I do think there is a special role for the NBA, something that has been a part of the history of this league for many decades, and I am proud to have inherited that mantle.