After Michigan's loss, Georgia overtakes No. 4, Ohio State to No. 6 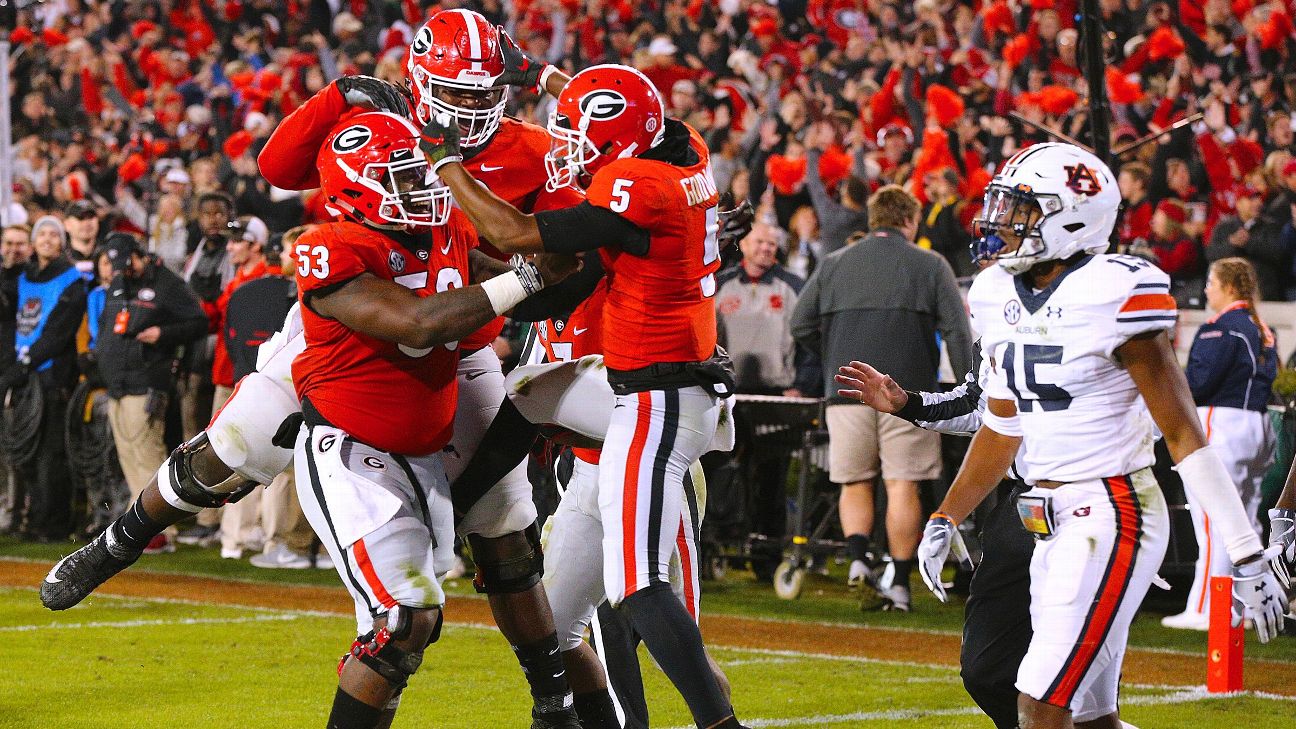 After three straight weeks of the same four schools' iron grips on the College Football Playoff semifinals, the Georgia Bulldogs came charging in at No. 4, knocking out Michigan, which fell to No. 7 after a 62-39 beatdown by Ohio State.

The Buckeyes jumped four spots to No. 6 -- a big jump but not enough to leapfrog Oklahoma, which sits at No. 5. The Sooners knocked off West Virginia59-56 last week, dropping the Mountaineers to No. 16.

"We spent a lot of time on that one [No. 6]. I understand the defensive efficiencies are there, but they really have an historic offense," committee chair Rob Mullens said of ranking the Sooners fifth.

The committee moved 11-0 UCFup one spot to No. 8, with the Knights' undefeated run not quite enough to get over the two-loss Wolverines.

Alabama, ClemsonandNotre Damemaintain their No. 1, No. 2 and No. 3 spots, respectively.

From No. 4 to No. 11, there was a shuffling of the season's most consistent teams and the most movement within the top 10 in the past two weeks.Washington Statefell out of the top 10 to No. 13 after a loss to Washington, which is now No. 11 -- a five-spot gain.

No. 9 Floridabroke into the top 10 after snapping Florida State's impressive bowl game streak on Saturday.LSU, down to No. 10, fell three spots after a 7-OT 74-72 loss to Texas A&M, which jumped just three spots to No. 19.

That causedNorthwesternto take a small dip to No. 21, down two spots from last week.

No. 12 Penn State, No. 14 Texas, No. 15 Kentucky, No. 17 Utah, No. 18 Mississippi Stateand No. 20 Syracusemaintained their rankings from the previous release. No. 22 Boise State,No. 23 Iowa State, newcomer No. 24 Missouriand No. 25 Fresno Statecomplete this week's rankings.

With conference championships this week, things could look quite different in the final iteration of the CFP rankings, out Sunday.

Alabama and Georgia clash in the SEC championship game, a rematch of last year's national title game, which Alabama won.

Texas and Oklahoma will vie for the Big 12 crown, while Northwestern faces Ohio State in the Big Ten title game. With all of those teams outside the top four, they will be seeking to make a case for inclusion in the semifinals.

Clemson and Pitt square off for the ACC, while Utah and Washington battle on Friday night for the Pac-12 title. UCF, vying for a second straight perfect regular season, faces Memphisfor the American title.

Ahead of championship weekend -- with strength of schedule, conference titles, records, common opponents and other factors going into the CFP rankings -- Mullens emphasized, "Each member will bring their own view on the definition of 'the best.'" 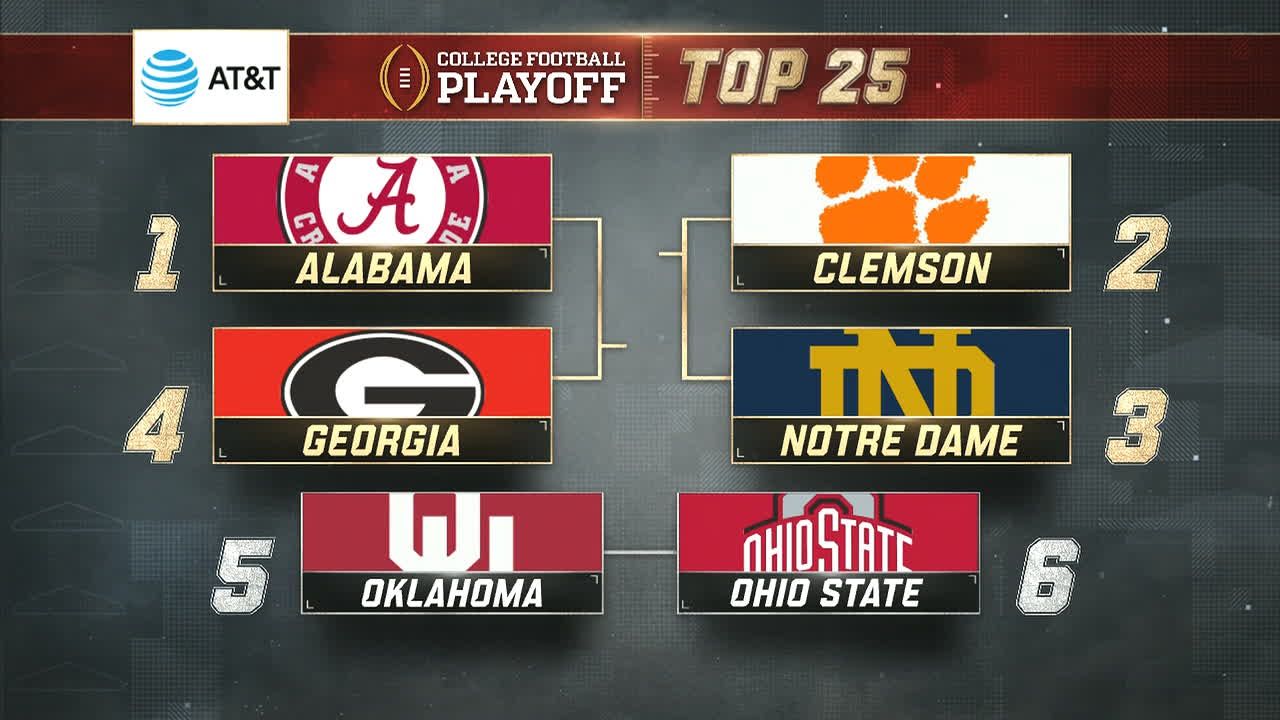 Georgia cracks the top four
The top six teams are released, and Georgia takes Michigan's spot in the top four, while Oklahoma is ahead of Ohio State at No. 5. 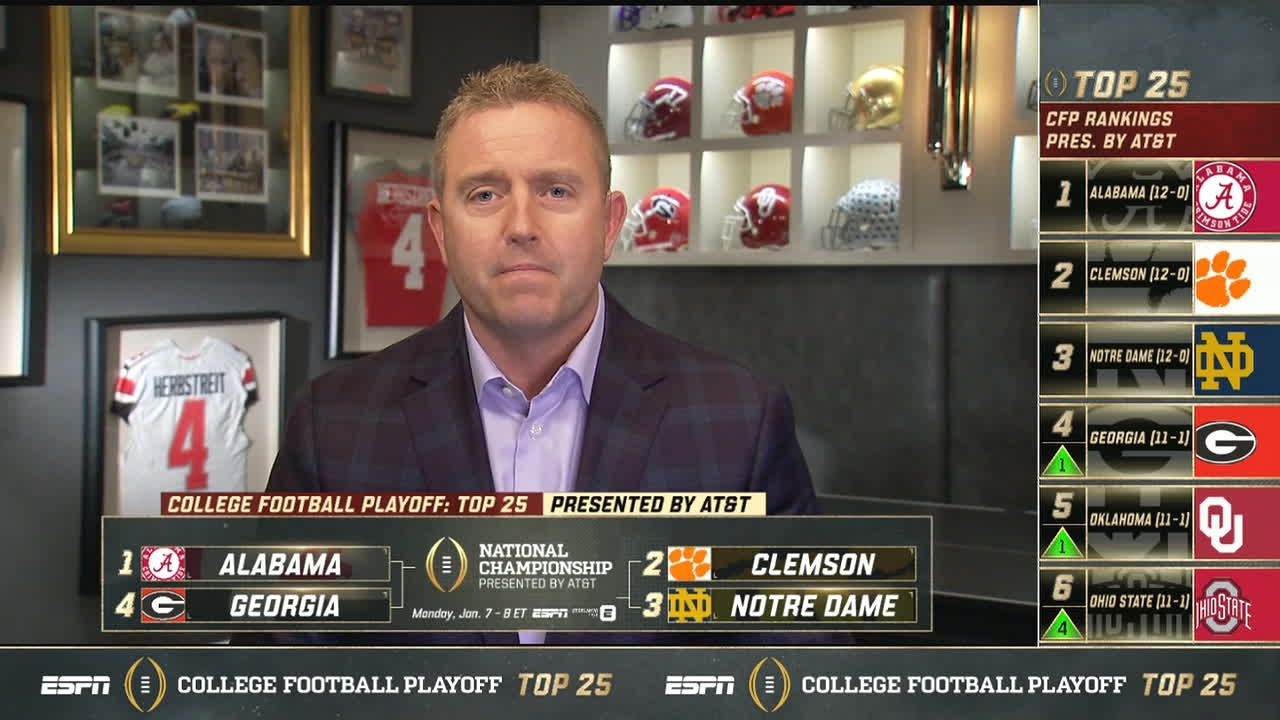