Alabama no surprise at No. 1 in first CFP; Clemson, LSU, Notre Dame follow 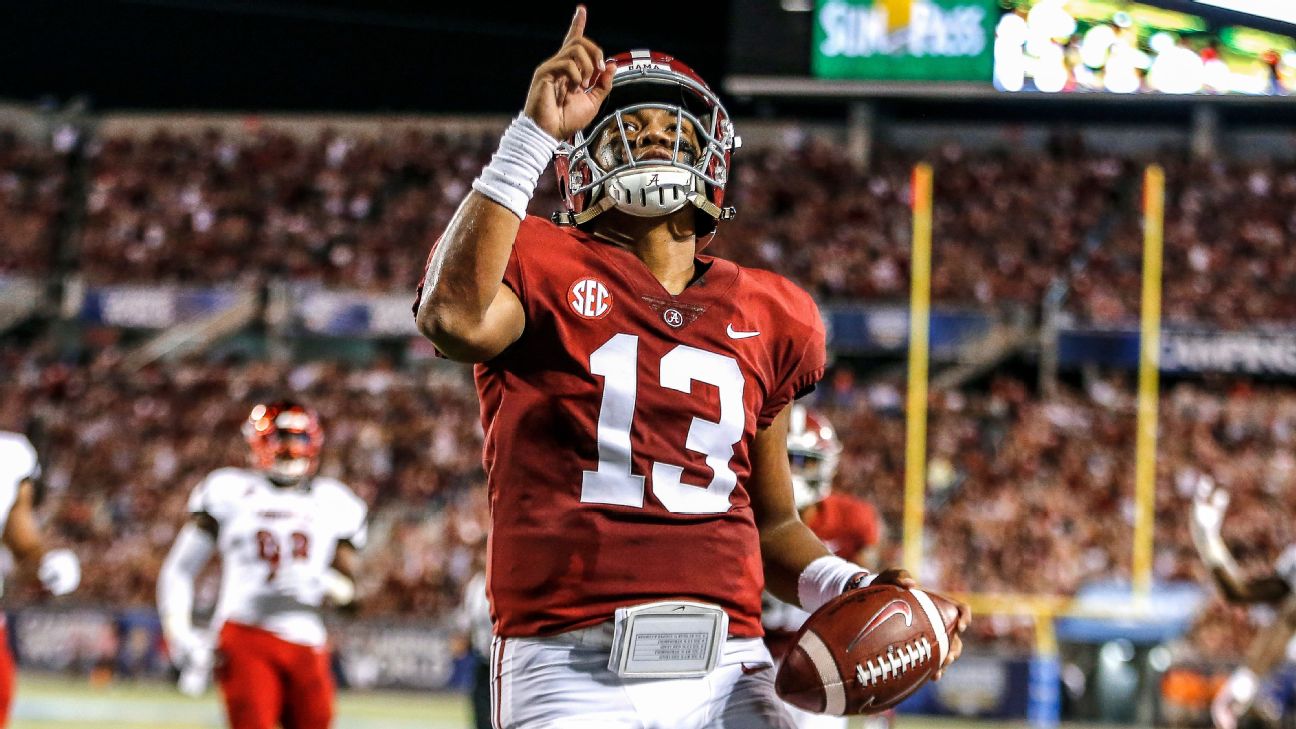 For the third time in the ranking's five-year history, the SEC sits atop the first College Football Playoff ranking of the season.

The Crimson Tide opened at No. 1 in the rankings released Tuesday night, matching its AP Poll ranking. SEC West foeLSUsits at No. 3.

Clemsonplants its flag at No. 2, and Notre Dameat No. 4 rounds out the top teams this week.

The Irish are ahead of LSU in the AP Poll, ranking at No. 3 and 4, respectively, but the 13-member committee -- with six new members this year -- was a bit more impressed with the Tigers' season thus far.

"LSU's résumé: They have six wins against teams over .500, and quality wins against Georgia and Mississippi State,"committee chair and OregonAD Rob Mullens said. "Just the close loss to Florida. We're impressed. Overall, their body of work was strong."

Clemson has now been ranked in the top four of every CFP ranking release since 2015 -- a streak of 19 straight.

The first two teams out are Michiganat No. 5 and Georgiaat No. 6. The Bulldogs stumbled in the playoff picture after a loss at LSU two weeks ago but provided a message with last week's win over Florida, ranked No. 11 in Tuesday's release.

Ohio Stateopens at No. 10, falling after the 49-20 Oct. 21 loss at Purdue on Oct. 21. Penn Statesits at No. 14, having lost back-to-back games to the Buckeyes and Michigan State. The Big Ten's final representative is No. 16Iowa.

No. 7 Oklahomais the highest-ranked Big 12 team, leading a list that includes No. 13 West Virginia, No. 17 Texasand No. 24Iowa State.

The Pac-12 is represented by No. 8 Washington Stateand No. 15 Utah.

The SEC has seven teams ranked, with No. 9 Kentucky, No. 18 Mississippi Stateand No. 20 Texas A&Mjoining the Tide, the Tigers, the Dawgs and the Gators.

Undefeated Central Florida, which made a case to appear in last season's playoff and finished with a 13-0 record that included a 34-27 Peach Bowl victory over then-No. 7 Auburn, is ranked No. 12. It's the same ranking UCF finished at in the final release of the 2017 ranking, tied for the highest by a Group of 5 team.

When asked about UCF's equity built over the past two seasons and its position, Mullens said, "We only look at the games today, one through nine. They're 7-0. They are the only team that hasn't played a team with a winning record through nine weeks."

Fresno State, No. 23, rounds out the Group of 5 representatives.

SEC dominates 1st CFP rankings heading into Week 10
Alabama leads the College Football Playoff rankings as the No. 1 team, while LSU comes in at No. 3 setting up a marquee matchup this week in Death Valley. 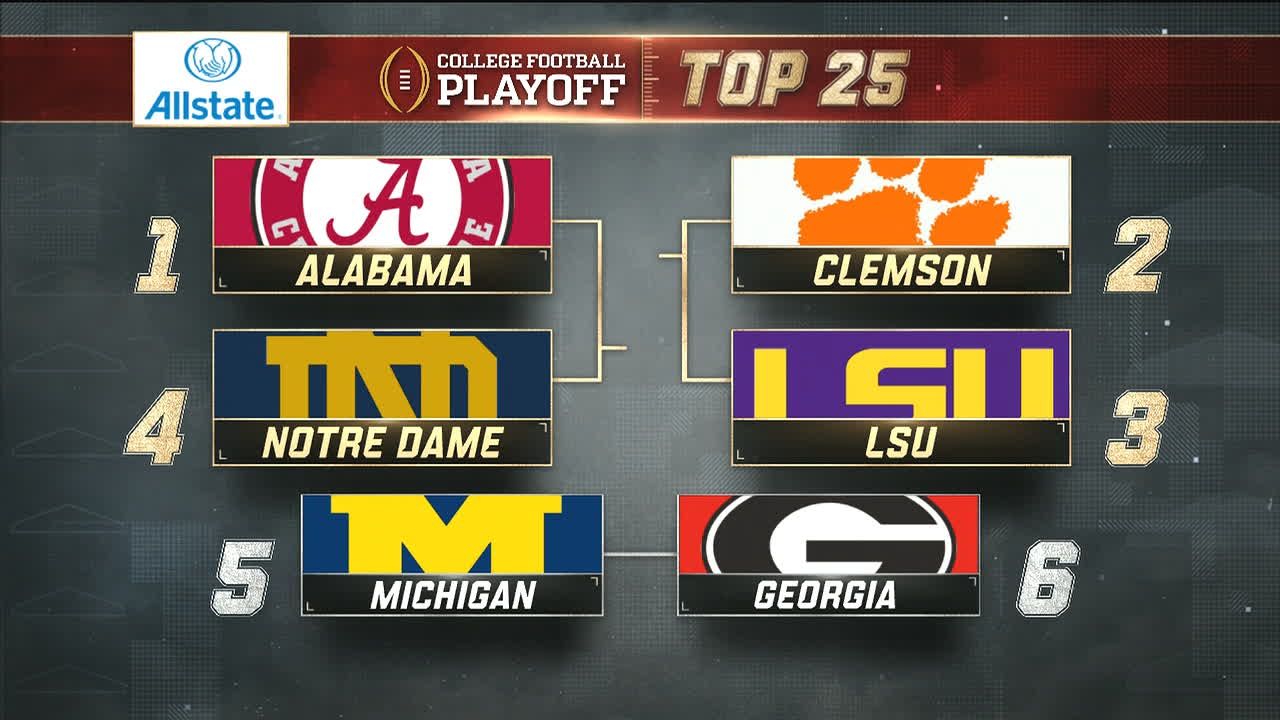 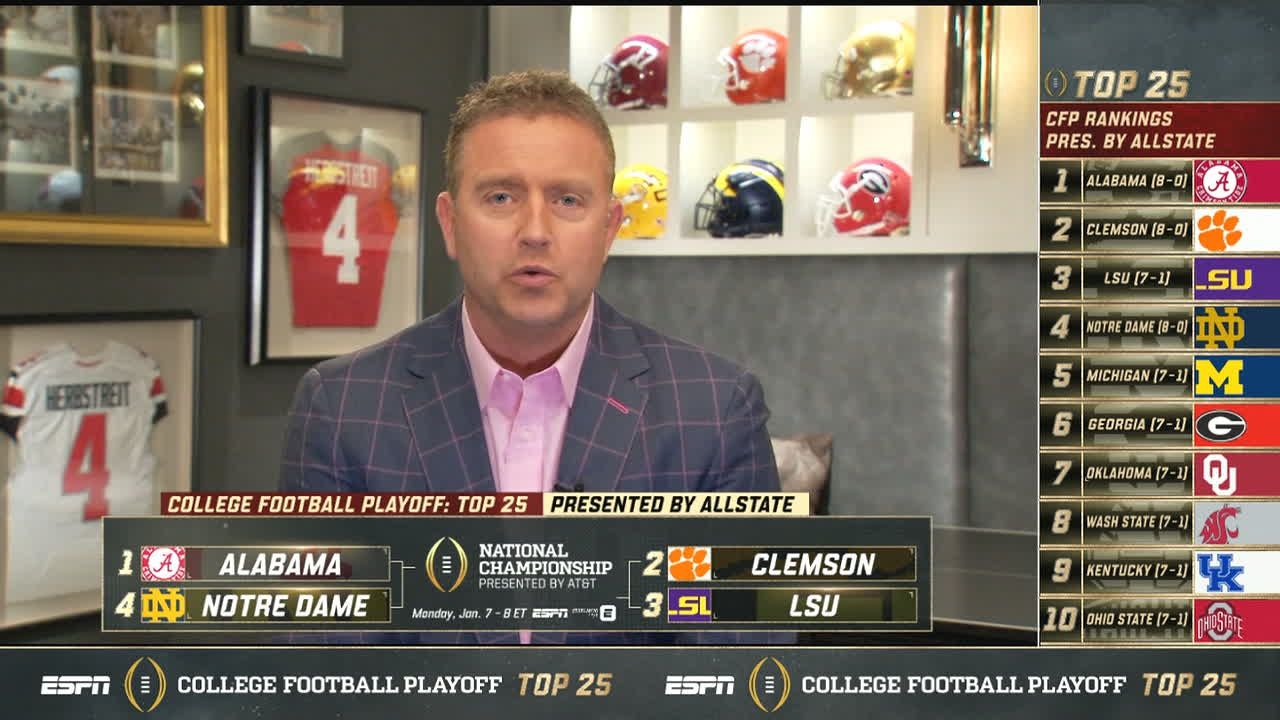