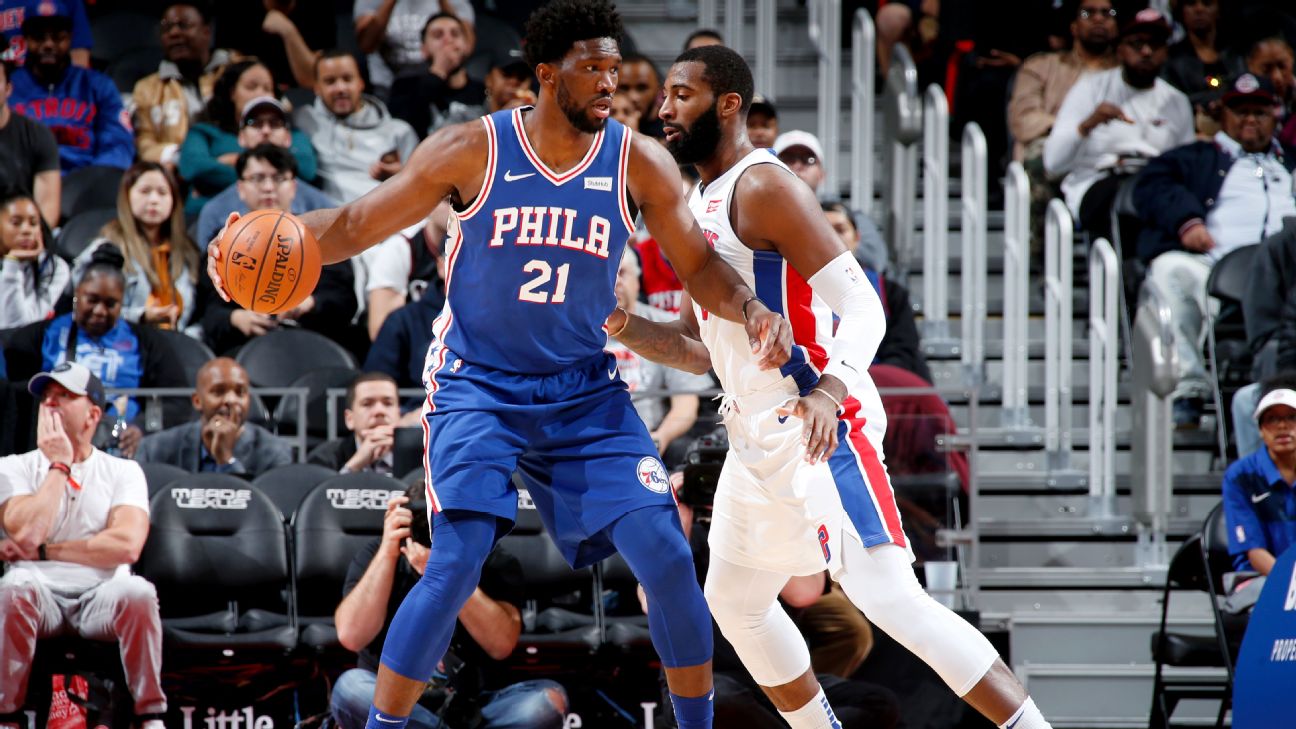 DETROIT -- Philadelphia 76ers center Joel Embiid might have lost to the Detroit Pistons on Tuesday night, but there is a place he might have won.

"I think I own a lot of real estate in his head," Embiid told reporters after the Sixers' 133-132 loss to the Pistons. "We lost, so I'm not supposed to talk trash, but he knows damn well that he can't guard me. But that was a team effort. You know, Blake [Griffin] had a good game, and they were able to pull it off, so we got another one tomorrow, and we got to do a better job."

Drummond was hit with his second technical foul and ejected with 42.8 seconds remaining in the fourth quarter when his hand brushed Embiid's face after a made basket by Philadelphia.

Drummond held his palms in the air after the foul call, while Embiid, who had gone to the floor, got up and gesticulated to the official to throw Drummond out of the game.

"His hand touched my face, and you know, going back, what the referees were saying the whole game, there were a lot of cheap shots taken," Embiid told reporters. "At one point, I think [referee] Tyler [Ford] said that the next cheap shot, the next one is going to get a technical foul, and that's why he got the other technical foul.

"All I was doing was just talking and playing basketball and trying to win the game, and obviously on the second one, you can see that he hit me, and his hand actually touched his face. ... But like I said, I feel like I own a lot of real estate in his head."

Drummond picked up his first technical foul with 2:01 left in the third quarter. He was not available to the media after the game but responded to Embiid on Twitter a few hours later.

Drummond and Embiid have a history. The two exchanged words through the media at the start of last season, with Embiid saying Drummond doesn't play defense and later saying Drummond couldn't shoot. Drummond responded by referencing Embiid's inability to stay healthy and play in back-to-back games in the past.

Earlier in the fourth quarter Tuesday, Embiid seemed to have words for Drummond after a driving dunk over him with 10:41 left in the fourth quarter, a play that prompted Pistons coach Dwane Casey to call a timeout. As Embiid walked back to the Sixers' bench, it looked like he said something to Drummond. Drummond appeared to say something back to him and then shrugged. The Sixers, at the time, led 98-91.

Casey said he didn't see Drummond's second technical foul or what caused it, but his center has to be able to keep his cool in critical moments.

"One thing we got to do, we got to keep our head, and I told our team, we hurt ourselves as much as they hurt us," Casey said. "We got to keep our head, and we're learning, we're young. I love our guys, but we get excited, and we just got to maintain our focus, maintain our poise, and don't let a guy talking stuff to you take you out of what you want to do or flop or whatever it was, I really didn't see it.

"But those are winning plays you got to make, and being disciplined in those situations and not just Andre, all of us, myself, coaches, whatever, we just got to be a disciplined organization in those tight quarters."

Embiid 'owns a lot of real estate' in Drummond's head
Joel Embiid describes what was going on between him and Andre Drummond as the Piston's center got ejected in the fourth quarter.