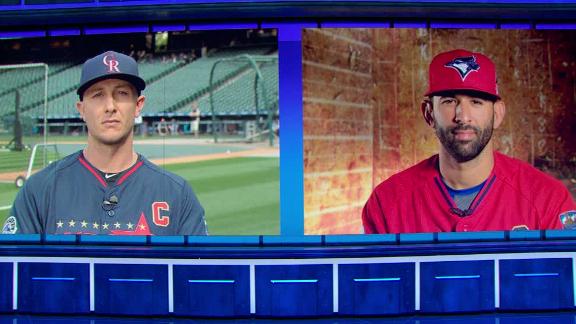 Troy Tulowitzki just hopes no one will hold any grudges when he picks the National League participants for the Home Run Derby at the All-Star Game.

The Colorado Rockies shortstop will serve as captain of the NL side and select the four other members for the derby. Jose Bautista of the Toronto Blue Jays is in charge of the American League.

"To be the captain, I don't know if that's something I'm looking forward to because of how tough the decisions are going to be," Tulowitzki said Monday before the Rockies played the St. Louis Cardinals. "You can't put everybody that wants to participate on your team. So with that, you open yourself up.

"But, at the same time, I'm honored to be the National League captain."

The event will be held July 14 at Target Field, the night before the showcase game in Minneapolis.

Bautista is a two-time major league home run champion. Tulowitzki has hit at least 25 homers in three of the past four seasons.

Although the honor was just recently bestowed on Tulowitzki, he's already mulling over his options. Giancarlo Stanton of Miami is high on his list, especially since he leads the league in homers with 20. Yasiel Puig of the Los Angeles Dodgers is also a consideration.

Tulowitzki might even select teammate Justin Morneau, especially since the first baseman came up in the Twins' organization and it would be a homecoming.

"That would be neat for him," said Tulowitzki, who has 18 homers this season. "Obviously, he's a guy I have a relationship with."

Given Tulowitzki's relationship with St. Louis outfielder Matt Holliday, he could be a pick, too. Tulowitzki spent some time catching up with his former teammate before Monday's game.

Did Holliday lobby to be included?

"I don't think so," Tulowitzki said, smiling. "Holliday is just a good friend of mine, someone that I have a great deal of respect for.

"If he wanted to participate, he'd definitely be someone on the list, but he wasn't (lobbying)."

Tulowitzki is hoping players around the NL reach out to him. Rockies pitcher Brett Anderson, who's currently on the disabled list, wrote on his Twitter account: "Fingers crossed Tulo picks me for the home run derby!"

He is listening -- and doesn't want to hear excuses about how the derby might mess up a batter's stroke.

"You take a look during (batting practice), sometimes I'll go out there and try to hit a home run on every single pitch," Tulowitzki said. "It's no different from being in the Home Run Derby.

"Those are my thoughts. I don't really want to entertain that thought, either. You get back on track. And if you're not doing good, you put some (work in the cage). It's not because of a Home Run Derby."