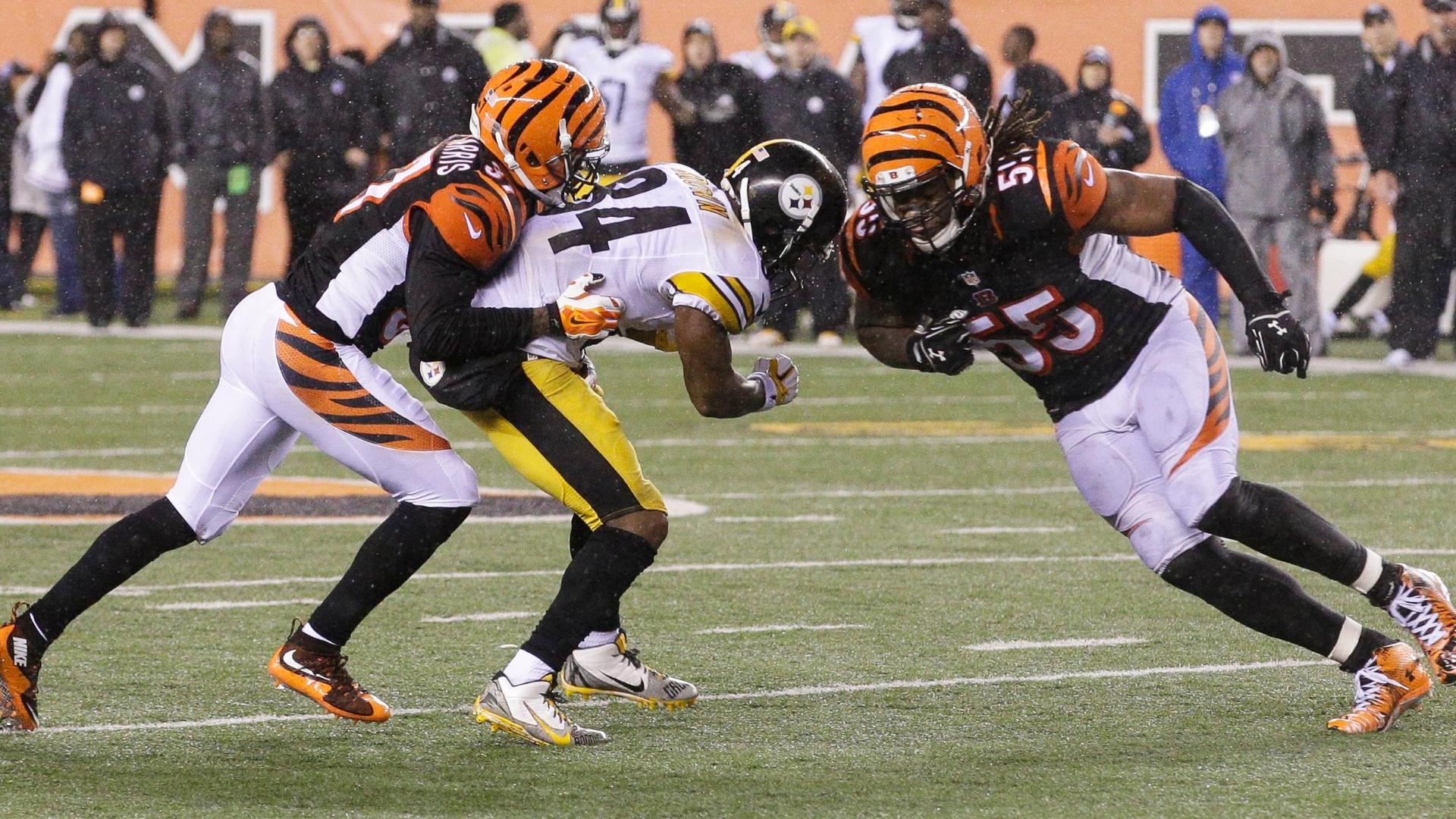 CINCINNATI -- A quote from Cincinnati Bengals founder and former coach Paul Brown scrolled all this week on monitors in the Bengals' locker room.

"The key to winning," it read, "is poise under stress."

In the closing minutes of Saturday night's AFC wild-card playoff game with the Pittsburgh Steelers, the suddenly stressed Bengals completely lost their poise. As a result, they lost the game, too, falling 18-16 to extend their nearly three-decade-long playoff drought for another year.

Penalties from two of the Bengals' baddest, most feared, most intense and most aggressive defenders all but decided perhaps the most gut-wrenching of the seven postseason losses Cincinnati has had under coach Marvin Lewis' watch. The two plays made for a fitting finish to another installment in a hate-filled rivalry that featured 47 fouls across three meetings this season.

"That's probably the funnest, scariest game I've been in," said Steelers linebacker Ryan Shazier, who forced a key fumble late in the fourth quarter and blasted Bengals running back Giovani Bernard on a hit that left the rusher with a concussion.

Just before Shazier's timely forced fumble with 1:36 remaining, it appeared the Bengals had a chance to actually win a playoff game for the first time since January 1991.

On the ensuing Steelers possession, with the ball near midfield and 22 seconds remaining in a game the Bengals led 16-15, Bengals linebacker Vontaze Burfict was flagged for unnecessary roughness when he hit a defenseless Antonio Brown after Brown jumped in an effort to catch a pass from Ben Roethlisberger. Then, as officials were sorting out the penalty and trainers evaluated Brown on the field for a concussion, Bengals cornerback Adam Jones drew an unsportsmanlike conduct penalty when he got in Steelers assistant coach Joey Porter's face during an on-field scrum between the teams.

It was the third time players and/or coaches from both teams nearly came to blows in the expectedly chippy contest. After their previous meeting in Week 14, seven players from both teams were fined nearly $140,000 for various post-whistle incidents.

Burfict's and Jones' 15-yard penalties not only put the Steelers in field goal range, but gaveChris Boswella 35-yard chip shot to win the game. Just before the field goal, Burfict was seen talking to coaches on his sideline.

"I was just telling the coaches out there [the Steelers players] were cussing out Adam. That's why Adam pushed [Porter]," Burfict said. "He shouldn't be on the field cussing us out.

"The ref heard it all, but the ref threw the flag on Adam."

"You've got to be disciplined to understand the ultimate goal. That's always got to be important," Bengals Pro Bowl offensive tackle Andrew Whitworth said. "It's not about one guy's mistake, or one guy that wasn't or was. At all times, our team as a unit, everyone has got to understand the discipline of winning the football game, and that's more important than anything else. It always has got to be No. 1. When you get those priorities out of control, that's when bad things happen."

"Vontaze is obviously a great player for us, and he's done a lot of really good things," Dalton said. "I'm not saying he's hurting this team, but the penalties are."

Burfict is facing a suspension for his hit on Brown, a source familiar with the situation told ESPN's Adam Schefter.

Burfict was the most fined player out of the contentious Week 14 game, drawing nearly $70,000 in fines for three separate incidents.

"The thing is, if you watch him, he's actually a talented football player," Steelers safety Mike Mitchell said. "It's just the little extra [stuff]."

Pittsburgh offensive lineman Ramon Foster, who said after the teams' Nov. 1 meeting that Burfict would "get his sooner or later," wanted no part of fueling this contentious rivalry any further.

"I don't want to give them no type of ammo for next year," Foster said. 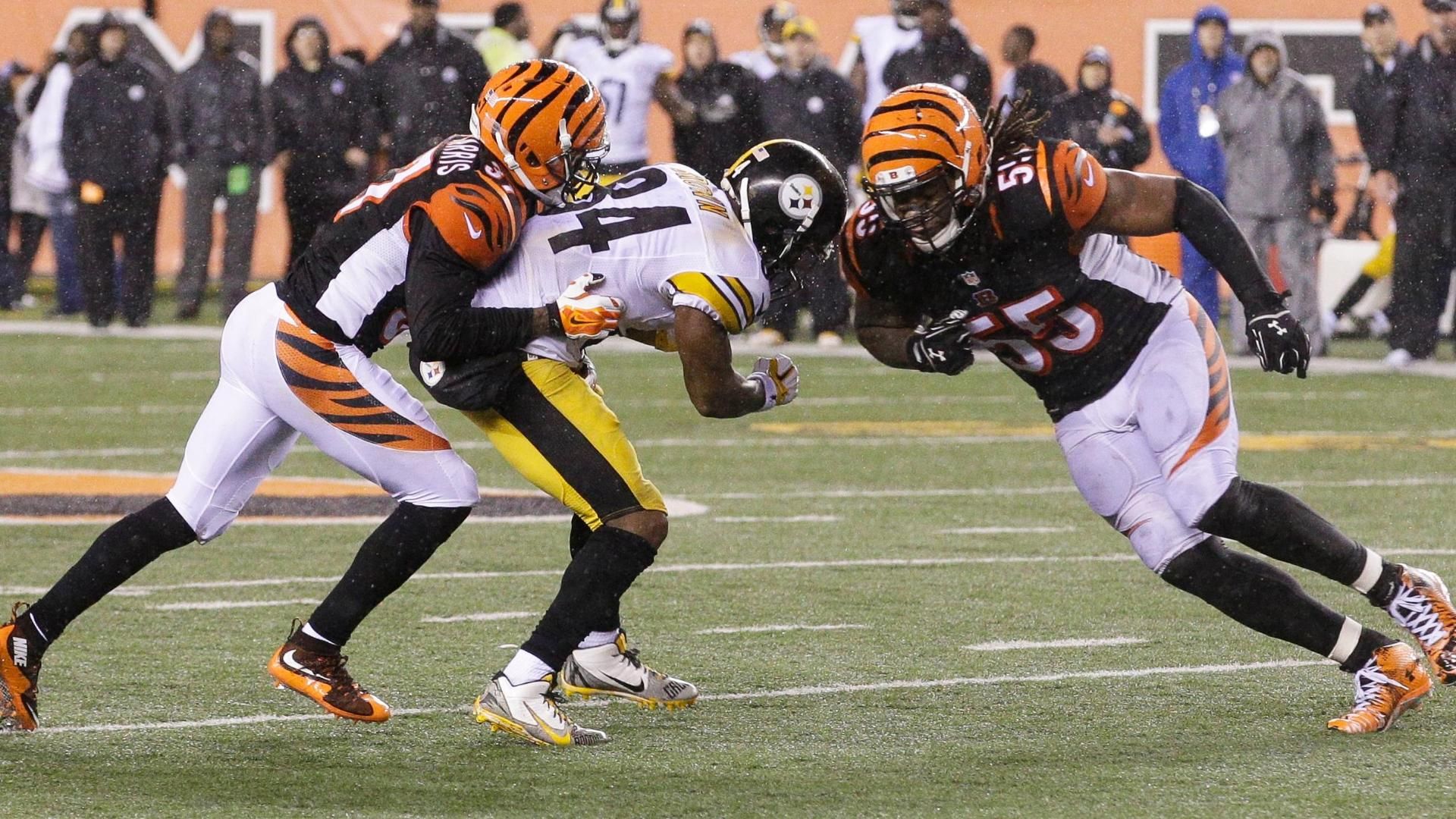 Penalties propel Steelers past Bengals
After being carted off with an injury in the third quarter, Ben Roethlisberger returns to lead the Steelers on the game-winning drive -- which included two personal foul penalties on the Bengals -- in Pittsburgh's 18-16 victory in the AFC wild-card round.

Burfict explains Bengals' Penalties
Bengals LB Vontaze Burfict explains to the media that Steelers coach Joey Porter was on the field cursing them out and that is why Adam Jones pushed him. 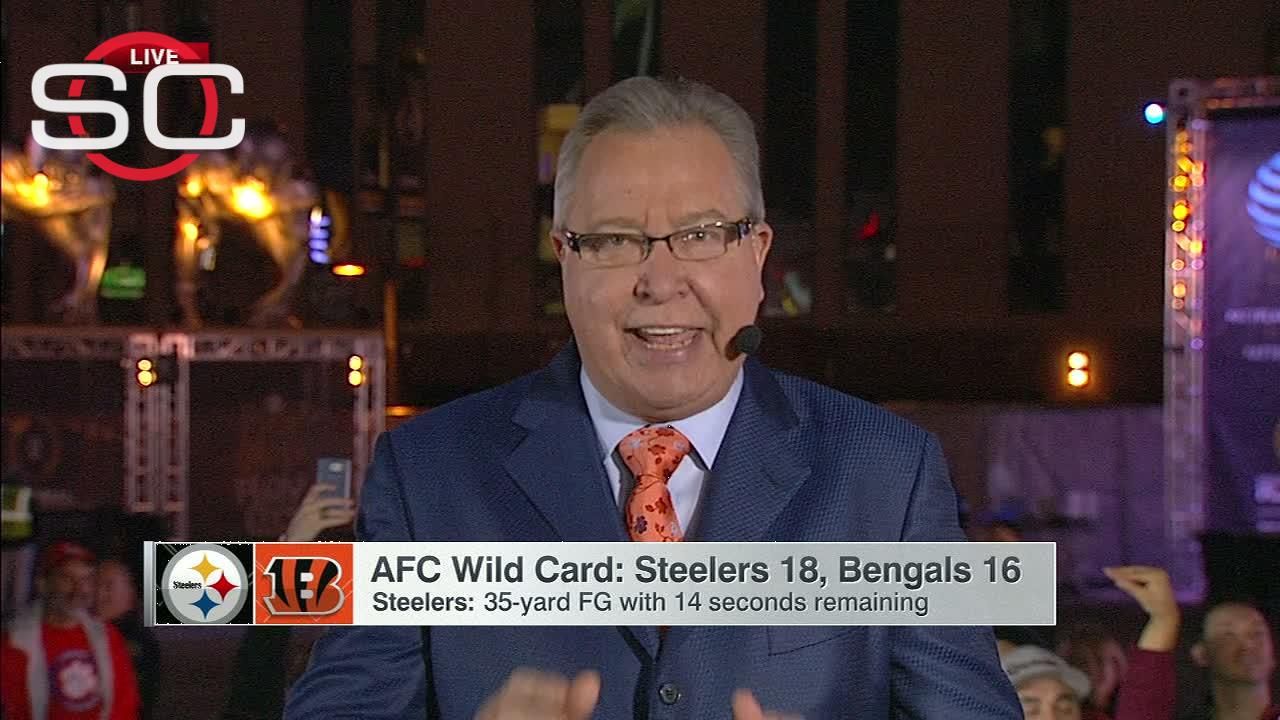 Jaws: 'I expected this kind of football game'
Ron Jaworski provides his reaction to the Steelers' 18-16 win over the Bengals, talking especially about the bizarre finish with Cincinnati losing its cool.