Each team has two open weeks, and the schedule has four weeks built in to reschedule games, including a leaguewide open week on Nov. 28. The model allows for opening games on the weekend of Sept. 3-5 to be moved to Sept. 12, Sept. 19 or Sept. 26 "through strategic sequencing."


The regular season is set to wrap up Nov. 21, and the league championship game is set for Dec. 5 with the ability to move back to as late as Dec. 19.

Michigan and Ohio State will face each other Oct. 24 -- the first time since 1942 that the rivals will not play at the end of the regular season. The Indiana-Purdue game, pitting rivals from opposite divisions, will take place Nov. 21.

Big Ten teams can open preseason training camp Friday or earlier, depending on the date of their first game. Ohio State will open camp Thursday.

Commissioner Kevin Warren reiterated there's "no guarantee" that sports will be played this fall during the coronavirus pandemic, but they had to put a schedule in place "just for planning purposes."

"I'm looking at this as really a day-to-day decision-making process," Warren told ESPN. "... I feel good today and comfortable to release a schedule, and I feel good today and comfortable to have our teams start to increase their practice, but we're gathering medical information on a daily basis. ... We understand we are in a pandemic and I think it's important that we've remained disciplined up to this point and we continue to remain disciplined and methodical and very balanced in our approach to a potential fall sports season in the Big Ten."

Warren said there is enough flexibility built into the schedule that if an entire team had to quarantine for two weeks, it would be able to.


The schedule allows for 41 of the 70 games to be moved to an open week, and features two groupings of open weeks. Scheduling flexibility was central to the decision to move up typical late-season rivalry games like Michigan-Ohio State.

"I was not focused on certain games," Warren said. "We know our rivalry games that usually take place at the end of the year are moved around, but I didn't agonize over moving a game. I'm focused on trying to create these policies and procedures, keep our student-athletes healthy and safe and evaluate this day-by-day. Every game that we have a chance to play if we are so fortunate and blessed, it will be embraced."

The Big Ten initially considered front-loading its schedule with division games. But, because of the odd number of teams in each division, it decided to open the season with cross-division games instead. In adding a 10th league game, the Big Ten didn't want cross-division opponents that teams were already set to face in 2021.

"It was something we were front and center about and asked all the athletic directors: 'Is this something, if it allows us to have more flexibility to move things around if needed, you're OK to have those games be placed in a different portion than when they normally would be played?' assistant commissioner Kerry Kenny told ESPN.

"The answer across the board from them was: 'Let's try to let's keep flexibility as the primary focus of this year's schedule. We'll adjust to the outcomes of what that flexibility provides once it's in there.'"

Several division games, including Michigan State at Michigan on Oct. 3, will take place at the same site as 2019 to enhance overall flexibility for the schedule, Kenny said. The sites will shift in 2021 as a normal home-and-home rotation resumes.


"Everybody has a bye in Weeks 5, 6 or 7, and everybody has a bye in either [Week] 10 or 11," Kenny said. "The flips, and just the ability to have the divisional games really spread throughout that middle portion of the season, really gave us the opportunity, if we need to, to move a singular game out of a particular week into one of those bye weeks because of a rescheduling process. That's the flexibility that I'm talking about."

The Big Ten also announced medical protocols, including twice-weekly testing for COVID-19. The league will use a third-party laboratory to conduct centralized testing and "consistency in surveillance and pre-competition testing."

"From a science perspective, a medical perspective and also -- to a much lesser extent, but one that had to be considered -- a competitive perspective, how can we ensure that everybody is on equal footing, in terms of the minimum requirements for testing?" Kenny said. "We think that sets us up to have a consistent approach."

Warren said at this time he didn't not know how much the conference-wide testing plan would cost.

The Big Ten on July 9 became the first FBS conference to reveal a general scheduling model, saying that all of its fall sports, including football, would operate with a league-only slate. But the league had held off on announcing specifics for football as it evaluated medical information about the coronavirus pandemic.

Marylandannounced that it was preparing to begin the season without spectators in attendance, but "it is our hope that we may be able to welcome some fans to home games as the season progresses and health conditions permit."Penn Statealso will not have fans at fall sporting events under current conditions. 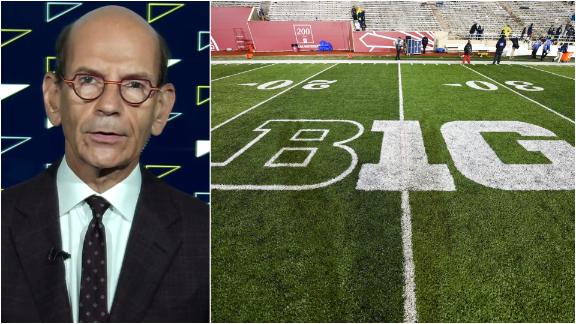