Biggest concern for each Top 25 team 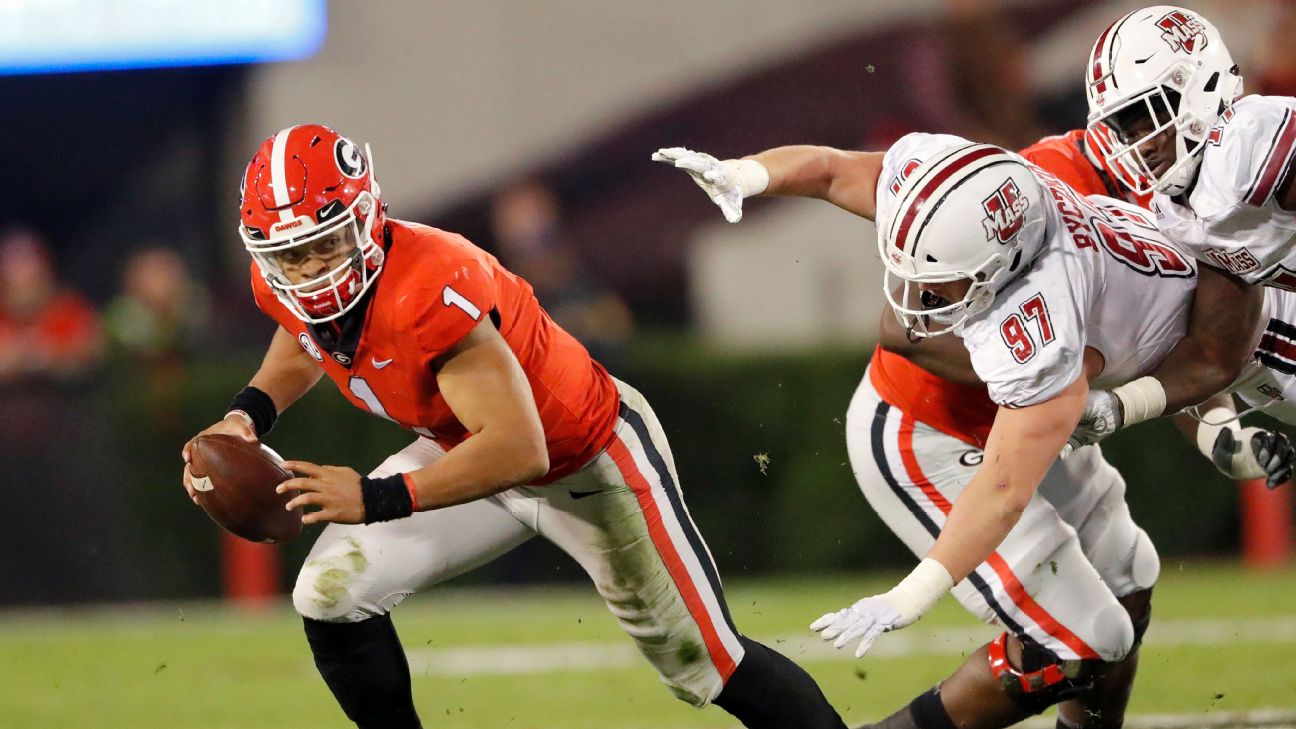 Even the nation's best college football teams have serious concerns heading into the offseason. Whether that's coaching turnover, early departures for the NFL draft or quarterback uncertainty, here are the biggest issues facing each team in the Way-Too-Early Top 25.

For any other team, the turnover on defense would be a huge red flag. For Clemson, it's more of a minor inconvenience. Yes, Christian Wilkins, Dexter Lawrence, Clelin Ferrell and Austin Bryant are all moving on to the NFL, along with Tre Lamar, Kendall Joseph and Trayvon Mullen. But there are some exceptional options waiting in the wings, and Brent Venables has shown his defense is as close to plug-and-play as it gets when the right talent is in place. Still, it might be personality that's as tough to replace as anything. Wilkins, Joseph, Ferrell and Lawrence were the heartbeat of the team, consistent influences in the locker room and on the practice field for years. The talent remains stout. The leadership will need to be developed this spring. -- David M. Hale

In a word -- turnover. Because it's not just that a record seven underclassmen declared for the draft, including Alabama's best linemen, Quinnen Williams and Jonah Williams. It's the coaching staff as well, where pretty much the entire offensive staff is being overhauled after coordinator Mike Locksley, quarterbacks coach Dan Enos, receivers coach Josh Gattis and offensive line coach Brent Key left for other jobs. -- Alex Scarborough

Having quarterback Jake Fromm back for another season is great, but what about the cast of characters surrounding him? Offensive coordinator Jim Chaney left for Tennessee, and two of his top wideouts, Riley Ridley and Mecole Hardman, have declared for the NFL draft. So did tight end Isaac Nauta and running back Elijah Holyfield. The only good news is that other than centerLamont Gaillard, everyone on the line should be back. -- Scarborough

The Buckeyes have seen record-setting quarterback Dwayne Haskins enter the NFL draft and backup Tate Martell transfer to Miami. If transfer quarterback Justin Fields is not eligible immediately in 2019, Matthew Baldwin is the next man up and really the only other option. Ohio State had a quarterback committed in the 2019 class in Dwan Mathis, but he flipped to Georgia on signing day. As a redshirt freshman in 2019, Baldwin is yet to see any game action and would be leading a team with a new head coach and a lot of eyes watching to see what plays out in Ryan Day's first season taking over for Urban Meyer. -- Tom VanHaaren

Notre Dame loses standouts at all three levels, from All-America cornerback Julian Love to linebackers Drue Tranquill and Te'von Coneyto disruptive lineman Jerry Tillery. Clark Lea took the unit from good to great in his first year as coordinator, but his toughest work lies ahead. Notre Dame's pass rush should be excellent with Khalid Kareem, Julian Okwara, Daelin Hayes and others, but there are potential trouble spots elsewhere. -- Adam Rittenberg

Though it's difficult to envision the Oklahoma defense being any worse than it was last season, the path to immediate improvement is not exactly clear-cut for new coordinator Alex Grinch. On paper, Oklahoma has recruited much better on the defense side in recent years, but that has yet to translate into the consistent development of solid team defense or individual standouts. With so much upheaval over the last year, it could take time for the defense to finally settle in under Grinch. -- Jake Trotter

The Gators lost five players early to the NFL draft, including three of their best players on defense: Chauncey Gardner-Johnson, Jachai Polite and Vosean Joseph. The trio combined for 209 tackles, 35.5 tackles for loss and 18 sacks. That is a lot of production off a defense that made major strides in Year 1 under Todd Grantham. Identifying impact players to replace them is a big priority this spring. -- Andrea Adelson

Although the Longhorns flashed their defensive capability in the Sugar Bowl win over Georgia, coordinator Todd Orlando's defensive unit will be relatively inexperienced next season with eight starters gone. Safeties Caden Sterns and B.J. Foster have star potential and the rest of the depth chart will be loaded with former blue-chippers. Still, much of the Texas defense will have plenty to prove in 2019. -- Trotter

The biggest challenge facing the Aggies in 2019 is the schedule. Four of their opponents finished in the top eight of the final 2018 AP poll: Clemson (first), Alabama (second), LSU (sixth) and Georgia (tied for seventh). Three of those games are on the road. Making that task more challenging is that the Aggies will have to replace to key players at a vital position; linebacker. Otaro Alaka graduated and Tyrel Dodson declared for the draft. -- Sam Khan Jr.

The Tigers have to protect the quarterback better, plain and simple. They were tied for last in the SEC in sacks allowed (35), and the shuffling up front because of injuries and other factors created a challenging situation (LSU started seven different offensive line combinations during the season). The Tigers were a solid unit in the run game, but they have to improve in pass protection in 2019, because their offense is not yet explosive enough to overcome that many negative plays, at least against elite opposition. -- Khan

Michigan's defense was picked apart in its last two games of the season against Ohio State and Florida, giving up a combined 103 points. The defense loses star linebacker Devin Bush, defensive ends Rashan Gary and Chase Winovich, defensive tackles Aubrey Solomon, Lawrence Marshall and Bryan Mone as well as defensive backs David Long, Tyree Kinnel and Brandon Watson. That's a lot to replace for a defense that was ranked No. 1 overall for most of the season. -- VanHaaren

The 7-6 win against Michigan State in the Redbox Bowl closed the season with the right result, but it didn't exactly inspire confidence about the general state of Oregon's offense. It's tough to make sense of that considering quarterback Justin Herbert might have been the most talented draft-eligible quarterback in the country this year. Was the 203-yard, one-score performance an anomaly or a possible indicator of more to come? -- Kyle Bonagura

Whenever a star quarterback leaves and a group of inexperienced, relatively anonymous players remain, there is a natural reason for concern. That's the case here with Gardner Minshew out the door, but Mike Leach's track record with quarterbacks mitigates that. -- Bonagura

The Knights were a veteran team this past season, especially on defense. The impact will be felt most on the defensive line, where six of the top eight players on the two-deep rotation are gone. That includes Trysten Hill, who decided to leave school early for the NFL draft. Players like Titus Davis, Joey Connors and A.J. Wooten not only performed at a high level, they provided valuable experience and leadership for the entire team. -- Adelson

The Orange feel good about the future of QB Tommy DeVito, but it's still hard to overstate how big the shoes are he'll be trying to fill. The Syracuse resurgence came on the arm (and legs) of Eric Dungey, who was as impactful a player as the Orange had for four years. He wasn't always elite, but he always forced defenses to adjust. The pieces are there for DeVito to find success, but whether he can rise to the occasion as Dungey so often did remains to be seen. -- Hale

Few units in college football will replace more talent on one side of the ball than Washington's defense. The Huskies lose nine starters from a group that ranked fifth in the country in scoring defense, including All-American LB Ben Burr-Kirven and defensive backs Byron Murphy and Taylor Rapp. The Huskies have recruited well but don't have much time to ease the new group in with only one game (Eastern Washington) before Pac-12 play opens against Cal on Sept. 7. -- Bonagura

The Nittany Lions were a popular choice in early January as the team hit hardest by the decisions of players with remaining eligibility who bolted to the NFL. Penn State lost running back Miles Sanders, offensive linemen Connor McGovern and Ryan Bates, in addition to defensive linemen Kevin Givens and Shareef Miller. The running game might suffer, also hit by the departure of dynamic QB Trace McSorley one year after the loss of superstar back Saquon Barkley -- though watch for heir apparent Ricky Slade. -- Mitch Sherman

Another year, another new offensive coordinator at Utah, but in this case new is also old. After spending the past three seasons as the OC at Vanderbilt, Andy Ludwig returns to the school where he coordinated the offense from 2005 to 2008. Those were good times at Utah, but it's fair to question how the transition to yet another offense will go for the Utes following Troy Taylor's departure to become the head coach at Sacramento State. --Bonagura

He's not the only valuable defender Northwestern loses -- cornerback Montre Hartage and linebacker Nate Hall also will be missed -- but Jordan Thompson's departure means Northwestern, for the second straight year, must replace a difference-maker up front. There's good depth everywhere else on defense, but the Wildcats will need Alex Miller or someone else to emerge in the middle of the line. Since 2017, Northwestern ranks 10th nationally in rush yards per game allowed (119.1). -- Rittenberg

The Cyclones in three years under coach Matt Campbell have proven efficient in their evaluation of skill players on offense and even better at developing such talent. But they've not dealt with early departures like the jumps this year of running back David Montgomery and big-play receiver Hakeem Butler to the NFL. Will their decisions disrupt Iowa State's ability to keep pace in the Big 12? Running back Kene Nwangwu and receiver Deshaunte Jones will get the first shots to step up. -- Sherman

This Wisconsin defense dealt with injuries all season, and it wasn't up to what this unit has looked like in the past. The Badgers' defense ranked 29th in total yards per game allowed, 54th in rush yards allowed per game and 22nd in passing yards per game allowed. The injuries were a big part of that, but the younger players who stepped in left a drop in performance. Now, the defense is losing some of those veteran defenders in Andrew Van Ginkel, Ryan Connelly, T.J. Edwards andD'Cota Dixon. If the defense can't fill those holes, it could produce another disappointing season. -- VanHaaren

Coach Barry Odom is reshuffling his defensive staff a bit after the departure of his brother, Brian, as outside linebackers coach to Oklahoma. Mizzou hired David Gibbs, formerly the Texas Tech defensive coordinator, to help fix a unit that ranked last in the SEC and 112th nationally in giving up 262 passing yards per game. The Tigers are replacing a lot up front on defense, and the maligned secondary returns intact under the guidance of coordinator Ryan Walters. -- Sherman

Unless Gus Malzahn finds a quarterback on the transfer market, there are going to be serious questions about the ability of the offense next season. Bo Nix is a talented prospect, but throwing a true freshman into the fire isn't always advisable. Rising junior Malik Willis is raw, and former minor league baseball player Cord Sandberg feels like a long shot. There are some nice young skill players in place -- JaTarvious Whitlow, Seth Williams and Anthony Schwartz are a few -- but there needs to be talent at quarterback for Malzahn's offense to work. -- Scarborough

The Cornhuskers hit rock bottom on defense at the end of 2017, giving up more than 50 points in each of three straight Big Ten losses. The first season under coach Scott Frost brought improvement in numerous areas. But there remains a huge hill to climb defensively -- even to match the acceptable standard alongside a high-octane offense. To start, the Huskers must get off the field on third down after ranking 102nd nationally last season in opponent conversion percentage. -- Sherman