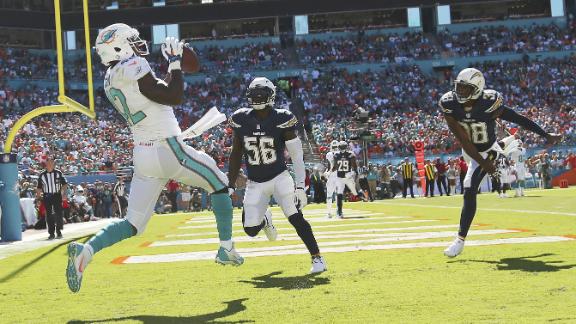 The Buffalo Bills have a new tight end, as the Miami Dolphins have decided not to match the Bills' five-year offer for Charles Clay.

Terms of the deal were not announced; however, the value of the deal would be $38 million, with more than $20 million guaranteed, a source told ESPN's Adam Caplan, confirming an earlier report by the Buffalo News. The five-year deal carries an average annual value of $7.6 million with $24.5 million overall being paid out in the first two years of the contract, a source told Caplan.

The Dolphins had placed their transition tag on Clay, which gave them five days to match or decline the offer. As a result, the Dolphins will gain $7.071 million in cap room by pulling the transition tag.

Buffalo has been in hot pursuit of Clay since the start of free agency. He visited the team last week, and that meeting led to his eventual offer.

The Bills front-loaded the contract and added a cap hit of about $12 million in 2016, according to a league source. This helped make Miami's decision easy, as that is the year the Dolphins will be paying big cap charges for Pro Bowl defensive tackle Ndamukong Suh and most likely players with expiring contracts such as quarterback Ryan Tannehill, center Mike Pouncey and defensive end Olivier Vernon.

Clay, 26, battled through knee and hamstring injuries most of last season but still finished third on the team with 58 receptions for 605 yards and three touchdowns. He also improved as a run-blocker.

The Dolphins selected Clay in the sixth round in 2011. He became a full-time starter for Miami the past two seasons.

Clay's departure means Tannehill has lost four of his top six targets from last season. The Dolphins traded disgruntled receiver Mike Wallace to the Vikings and released Brian Hartline and Brandon Gibson. They acquired receiver Kenny Stills in a trade with the Saints.