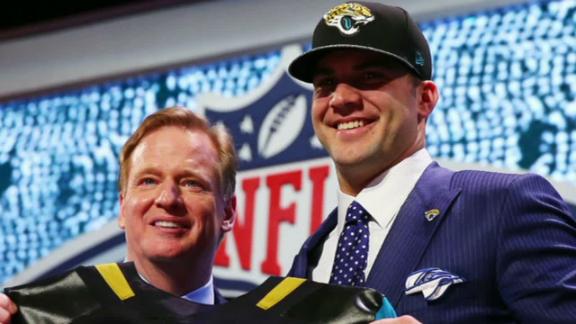 JACKSONVILLE, Fla. --The Jaguars finally have their franchise quarterback under contract after rookie Blake Bortles, the No. 3 overall pick in last month's draft, signed a four-year contract worth $20.65 million on Wednesday.

Bortles' deal includes a $13.34 million signing bonus and a fifth-year option at the team's discretion.

"I never thought about, 'I need to sign. I can't wait to sign. I need to hurry up to sign,''' Bortles said. "It is a once-in-a-lifetime thing, signing your first NFL contract. So that was something that's cool and I'll cherish forever. But it's definitely in the past and forgotten about in my mind.''

Bortles is not expected to be on the field in 2014. Jaguars general manager David Caldwell and coach Gus Bradley have said Chad Henne will be the team's starter and Bortles can develop without the pressure of having to play immediately.

Bortles realizes the transition from college star to NFL starter will take time and patience.

"It was the same thing freshman year of college, so you're just starting all over again,'' Bortles said. "It's just everybody's bigger, stronger and faster. You're going through the same thing. You're learning the new playbook, you're meeting new people and you have different challenges. You've got to be able to have that quarterback amnesia and move past things.''

Bortles was the offensive player of the year in the American Athletic Conference in 2013 after throwing for 3,581 yards and 25 touchdowns. He led Central Florida on six second-half comebacks, which were tied for most among FBS quarterbacks. According to ESPN Stats & Information, Bortles had an 89.6 Total QBR when trailing in the second half, which ranked behind only Louisville's Teddy Bridgewater.

The Jaguars, after drafting Blaine Gabbert with the 10th overall pick in 2011, joined the 1982-83 Colts as the only teams to select two quarterbacks with a top-10 pick in a four-year span, according to ESPN Stats & Information.