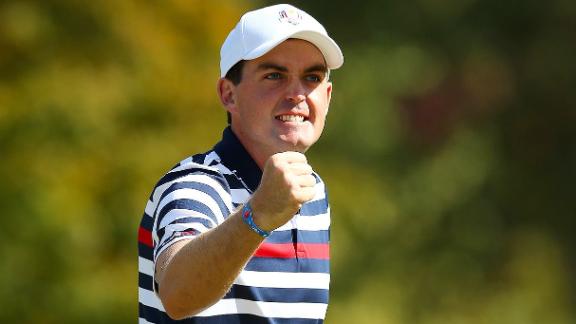 Not so valuable was recent success. He left out Chris Kirk, who finished higher in the final Ryder Cup standings than Simpson, and who won the Deutsche Bank Championship a day earlier by going head-to-head with Rory McIlroy the final 36 holes.

"That was a snapshot," Watson said of his decision not to take Kirk.

The other two choices were not surprising. Even though Bradley has not won a tournament in two years and missed out by three spots qualifying on his own -- or about $240,000 -- he has raw power suited for this event and won all three matches in a partnership with Phil Mickelson two years ago at Medinah.

Mahan is the only pick who has been on a winning team, though he is associated more with the wrenching emotion that losing brings. Mahan was in the decisive match four years ago at Wales when Graeme McDowell made all the right shots in another European victory.

Mahan was left off the 2012 team, even though he narrowly missed qualifying.

Whomever he chose, Watson's message was clear. The Ryder Cup, to be played Sept. 26-28 at Gleneagles, is all about redemption.

The Americans were poised to win at Medinah two years ago when they took a 10-6 lead into the final day, only for Ian Poulter, Justin Rose, Sergio Garcia and Martin Kaymer to deliver key putts and big comebacks that allowed Europe to retain the cup.

Europe has won seven of the last nine times, and it will be heavily favored in Scotland.

Earlier Tuesday, at the European Tour headquarters in Wentworth, captain Paul McGinley selected Poulter, Lee Westwood and Stephen Gallacher, who will be 39 when he makes his Ryder Cup debut in his home country.

Tiger Woods won't be on the American side as he takes time off to rest his ailing back, but did tweet his support Wednesday.

- Tiger Woods (@TigerWoods) September 3, 2014Bradley said last week at the Deutsche Bank Championship there wasn't a moment that he was not thinking about the Ryder Cup. He feared being left off the team when he finished his round on Monday, and shared an emotional hug with his girlfriend when Watson gave him the good news.

"I made no secret how badly I want to go back and win the Ryder Cup," he said. "This is a redemption year for a lot of guys who were on the team last year."

- Brandt Snedeker (@BrandtSnedeker) September 3, 2014Bradley and Simpson are among seven players who were on that U.S. team that was on the losing end of the "Miracle at Medinah." The others are Mickelson, Jim Furyk, Zach Johnson, Matt Kuchar and Bubba Watson.

The U.S. captain will be 65 when he leads his team, the oldest captain in history. Watson last was at the helm in 1993 at The Belfry, which also is the last time the Americans won the Ryder Cup in Europe.

He said Bradley and Mickelson likely will play together, as will Simpson and two-time Masters champion Watson. The captain said he was leaning toward a couple of players Monday night, but went with his instincts in taking Simpson. He said he looked at the 2012 results and saw a pair of 5-and-4 victories by Simpson and Watson during team matches. In the Sunday singles, Poulter won the last two holes for a 2-up victory over Simpson.

As for Kirk, he might as well keep those tickets for the Tennessee-Georgia game on Sept. 27. Even after winning a FedEx Cup playoff event for the biggest title of his career, Kirk said he was not entitled to a pick because he didn't earn his spot on the team. Watson loved the attitude. He just went with Simpson, instead.

Simpson is No. 32 in the world, the lowest-ranked player on the U.S. team.

He tied for ninth at the Deutsche Bank Championship, and knew it might be tough when Kirk won the tournament.

"It was a big win for him. I knew it was going to be a difficult decision," Simpson said. "But I knew a good, solid week would make it tough for the captain not to pick me."

Mahan was a popular pick after his victory at The Barclays against one of the strongest fields of the year.

Furyk, Mahan and Mickelson are the only Americans on the team who know what it's like to celebrate a victory. They all played on Paul Azinger's team at Valhalla in 2008, while Furyk and Mickelson were part of the Great American Comeback at Brookline in 1999.

Mahan knows better than most what it's like to lose. The 2010 matches came down to the final game, and McDowell went 2-up with a birdie on the 16th hole. Mahan stubbed a chip short of the 17th green that all but secured a European victory, and it seemed to him as though all of Wales stormed across the green when it was over.

"Losing lingers," he said. "It's been four years, but it feels like yesterday. I remember walking off the green and everyone was having a big party, and I felt like I was walking by myself for 600 yards to the clubhouse."