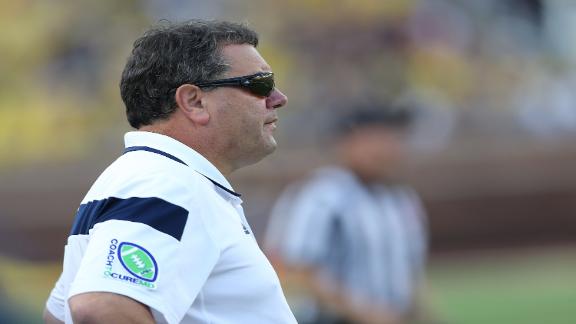 Michigan coach Brady Hoke said he isn't fazed by the building sentiment among Wolverines fans that he isn't the man for the job in Ann Arbor.

The Big House crowd booed Hoke, chanting its request to fire both him and athletic director Dave Brandon, during a 30-14 loss to Minnesota on Saturday.

This is the first time Michigan has recorded three losses by the end of September in its 135-year football history, according to ESPN Stats & Information.

Hoke said after the game that he didn't hear the jeering while on the sideline and that even if he had, it wouldn't have affected him.

"This is a big-boy business."

Michigan (2-3) is now 1-8 in its past nine games against Power 5 conference opponents. Hoke said the team's goal of winning a Big Ten title is still achievable despite a losing record five games into the regular season.

"I think this team can still win a championship," he said. "I really do, but we've got to play much better and we have to support each other as we do it."

Hoke said earlier in the week that he doesn't have time to think about his job security in the middle of the season because it's not fair to his players.

Michigan would owe Hoke $3 million if the school fired him before January. The buyout in his contract drops to $2 million Jan. 1. The school paid Hoke a $1.5 million "stay bonus" this past January and has invested $12.26 million in him in his four years with the program.