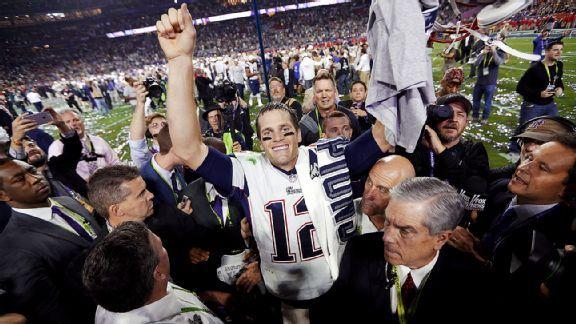 GLENDALE, Ariz. -- There was going to be a time and a place for Tom Brady Sr. to talk about the deflated ball controversy. It ended up being Sunday night on the field at University of Phoenix Stadium, among the confetti of the New England Patriots' Super Bowl XLIX victory over Seattle.

Brady Sr. opened up while leaning against a red Chevy truck that his son, Patriots quarterback Tom Brady, had just won for earning his third Super Bowl MVP moments after winning his fourth Vince Lombardi Trophy. For the past two weeks, his son's reputation had been questioned because of allegations that the Patriots deflated 11 of 12 footballs in the first half of the AFC Championship Game.

He shook his head.

"The drip, drip, drip way that things have come out," he said, referring to leaks during the investigation. "It's a conniving way to do business. ... There was no sting? B.S. They've never gauged footballs at halftime."

The footballs Sunday were kept under lock and key from the time the NFL took control of them Friday until 10 minutes before Sunday's kickoff. Seattle and New England were allowed to practice with and prepare them all week, however.

NBC asked for its cameras to be allowed into the room that housed the footballs Sunday deep under University of Phoenix Stadium, but the league denied the request, NBC reporter Michele Tafoya reported during the live broadcast.

The NFL has hired Ted Wells to investigate whether the Patriots' footballs that were used in the first half of the AFC Championship Game were "the result of deliberate action," NFL commissioner Roger Goodell said last week.