Broncos-Titans breaks down into sideline scuffle over low hit on Chris Harris Jr. 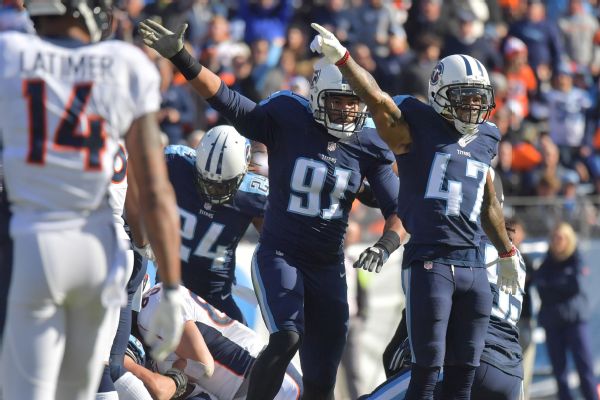 On a 6-yard run by Derrick Henry with 3 minutes, 10 seconds left in the first half, Harris was standing away from the pile in the middle of the field when Douglas dove at his right knee.

Harris, who suffered a torn ACL in his left knee in 2013, pulled his right leg back just after contact or any injury likely could have been much worse. He fell to the ground after the hit, clutching his right knee.

After a few moments down on the field, he walked slowly back to the bench area with the team's trainers. Harris returned to the game before halftime and played the entire second half.

"I never had a player try to end my career before," Harris said. "That's not football. He tried to end my career with a hit like that. ... [The officials] didn't call it, but hopefully the league can take a look at that."

Minutes later, as he walked to the team bus, Harris added, "Whatever the biggest fine is, that's what he should get."

"First of all, that's a clean play," Douglas said. "It was a run play with me and him looking at each other, and I cut-blocked him. Like I told them, if they watch film, which they're supposed to do in the NFL, you would know I can cut-block in the run game and that's a legal play. I guess he didn't watch film because if they watched me last week or any other game he would say that's what I do in the run game."

Douglas' hit left plenty of hard feelings. On the following play, with Aqib Talib lined up on Douglas, the Broncos cornerback confronted the receiver after another run play. The two ended up pushing and shoving close to the Titans' bench area. Shortly after, several more Titans players had surrounded Talib before more Broncos players waded into the scrum.

Officials got the players separated, and Talib was assessed an unnecessary roughness penalty. Three plays later, Ryan Succop kicked a 41-yard field goal to give the Titans a 13-0 lead.

Talib minced no words after the game, calling Douglas a "sorry player," and continued on saying "the next time I see him in Atlanta I'm going to beat his ass," since both Talib and Douglas are represented by the same agent.

"I was just standing there. I was nowhere near the play," Harris said. "I mean, somebody tries to end your career, I can't believe he did it."

The league likely will review the play in the coming days, and there is potential for a fine for Douglas. After the game, Douglas was asked whether he was concerned if the Titans eventually had to face the Broncos again in a playoff game.

"Y'all forgot who won today?" Douglas said. "I ain't worried about playing no one in no playoffs. ... The way we play the game of football, we don't care who we play."

Harris said his knee was sore after the game and that he didn't feel 100 percent after the hit.

"I was nowhere near the play, but that's why he's out there, to be a dirty player," Harris said.

Douglas then responded to the accusations of him being a dirty player.

"I'm a tough player. I'm a gritty player," he said. "I'm not a dirty player, no matter what anybody says."

Broncos-Titans brawl over low hit on Harris
In the closing minutes of the first half, Aqib Talib gets into a shoving match with Harry Douglas after Douglas hit Chris Harris Jr. with a low block on the previous play, which resulted in both teams getting into it on the sideline.

2 NJ teens die after falling through ice in separate incidents