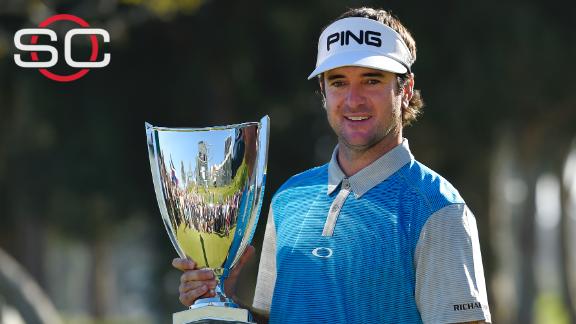 LOS ANGELES -- Bubba Watson packed plenty of memories from his week in LA. He has a kidney stone as a keepsake. He had a cameo in "Girl Meets World." He received a text Sunday morning fromStephen Curryoffering shooting tipsto Watson's son. And he capped it all with the best memento of all.

"Hold on a second, my trophy is coming," Watson said, interrupting his news conference as the shiny prize was placed on the table next to him.

It wasn't clear if passing the kidney stone or winning the Northern Trust Open was more difficult.

Two shots behind with four holes to play, Watson rallied with flawless golf and a pair of birdies over the last three holes to overtake Jason Kokrak and hold off Adam Scott to win at Riviera for the second time in three years and move back to No. 4 in the world.

And then he took the lead with a birdie that was pure Bubba.

Both feet came off the ground as he hammered a drive 334 yards on the 582-yard 17th hole, and then he hit 2-iron to the back of the green that led to a two-putt birdie. He closed with a 3-under 68 for a one-shot victory over Kokrak and Scott.

"The highlight is definitely winning," Watson said. "When you come to Hollywood, there's a lot of things you can do. It's fun. And winning is the cake."

It was a bitter taste for Kokrak, going for his first PGA Tour win and making it look like it was his time when he fired at a dangerous pin on the 13th and pulled it off for a short birdie putt that gave him a two-shot advantage.

But he made bogey from the fairway on the 15th, had to scramble for par on the next two holes and narrowly missed a birdie on the 18th that ended his chances.

Scott raced off to a big start with an eagle and three birdies over his opening six holes. He missed a pair of 4-foot par putts on the back nine, only to bounce back with a key birdie on the 17th and a chip-in for birdie from behind the 18th green for a 67 that tied him for the lead, but only briefly.

Watson, two groups behind him, two-putted from 40 feet for his go-ahead birdie.

"A guy like Bubba, he's very tough to beat," Scott said. "He's proving tough to beat from that position. He's wearing the course out on the toughest day."

Six players were still in the mix on the back nine until the final few holes.

Rory McIlroy was not among them.

McIlroy tied for the lead with an eagle on the par-5 opening hole, then made nothing but pars and seven bogeys until a meaningless birdie on the final hole for a 75 that put him in a tie for 20th. He loved Riviera and said he would be back. He just didn't like the way his week ended.

"I turned a chance to win into a top 20 at the end of the day, so that wasn't too good," McIlroy said.

Watson won for the ninth time in his PGA Tour, but rarely on a week with so much activity.

He said he passed the kidney stone on Monday, and then took 3-year-old Caleb to hang with Justin Bieber. He taped a "Girl Meets World" show, and even was given one line (that required four takes). And then he rushed out of Riviera with a 1-shot lead Saturday night to hang at Staples Center for a Clippers-Warriors game. He said Curry sent a text about 15 minutes before he teed off Sunday offering some shooting tips to Caleb.

And then he wound up a winner at Riviera again, a course he loves because of the history and because it changes so little over the years.

The timing couldn't have been better.

Watson was still stung by his week at the Phoenix Open, when he was booed for comments earlier in the week that he didn't like the changes to the TPC Scottsdale. He said that was misconstrued into a headline that he didn't like the tournament, and he said the verbal abuse was so bad that at least two players complained on his behalf.

But when asked earlier this week if he was going back to Phoenix, Watson replied, "I'll be the first one to sign up."

And he'll be back at Riviera, the course that still makes him nervous over every shot (especially on No. 10) and every putt. He still managed to win.