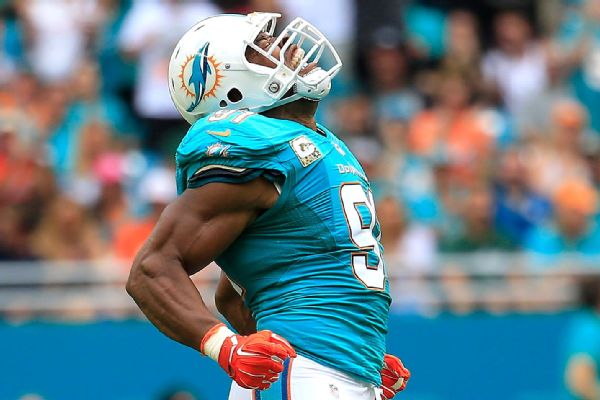 Playoff spots won't be the only things on the line when the 2017 NFL regular season concludes Sunday.

A host of players across the league are in line to pocket significant bonuses if they can reach certain performance incentives based on their Week 17 play. ESPN's Adam Schefter, citing sources, looks at some of the most significant:

Miami Dolphins defensive end Cameron Wake collects a $1 million incentive for 55 percent playing time this season. Entering Sunday, he's at close to 60 percent and is expected to clinch it against the Buffalo Bills.

Philadelphia Eagles running back LeGarrette Blount, who has 729 rushing yards this season, has a $300,000 incentive for 750 rushing yards. Blount needs 21 rushing yards against the Dallas Cowboys to hit that mark.

Los Angeles Rams defensive lineman Michael Brockers, who has 4.5 sacks, earns a $125,000 bonus for 5.5 sacks this season. Brockers needs one sack versus the San Francisco 49ers for the payout.

Atlanta Falcons defensive end Adrian Clayborn, who has 9.5 sacks this season, needs an additional half-sack against the Carolina Panthers to collect a $1.25 million bonus for 10 sacks this season. Clayborn's sack total this season already has earned him a $750,000 bonus.

Minnesota Vikings wide receiver Adam Thielen, who has 85 catches this season, has a $250,000 incentive for 90 catches. Thielen needs five catches against the Chicago Bears to collect the additional bonus; he already has collected $750,000 for reaching 80 catches this season.

New Orleans Saints defensive end Cam Jordan, who has 12 sacks, has an escalator in his contract for 2018 that will pay him an additional $250,000 in base salary if he reaches 13 sacks this season.

Bears wide receiver Kendall Wright, who has 54 catches, needs six more to achieve a $375,000 bonus for 60 catches this season.