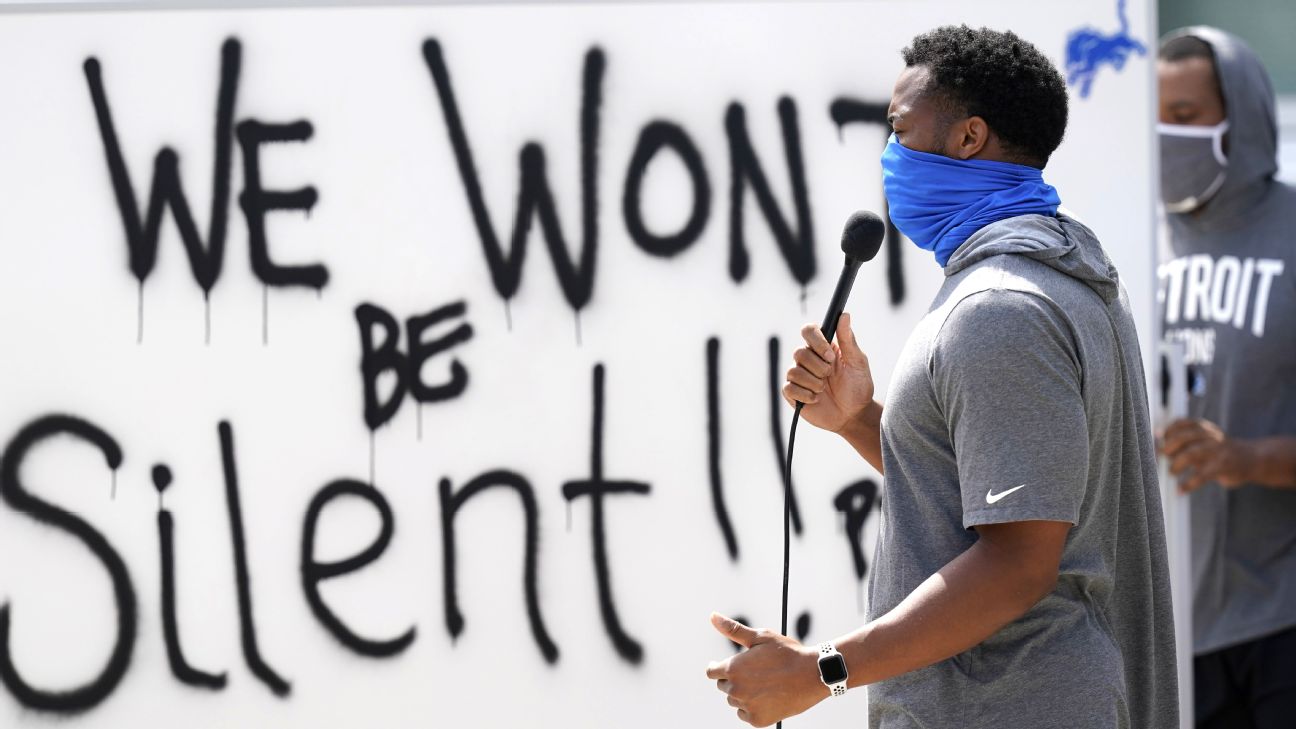 If you think what happened in the NBA on Wednesday can't happen in the NFL, you don't know what year this is.

Old rules are out the window in 2020. Long-held expectations are outdated. The Detroit Lions canceled practice Tuesday so they could stand outside of their team facility and talk about police brutality in front of reporters. Nine NFL teams canceled their practices Thursday so they could discuss larger societal issues among themselves.


Ostensibly, this week's sports protests sprouted in response to an incident in which Jacob Blake was shot seven times by police Sunday in Kenosha, Wisconsin. But if you've been listening and paying attention for the past several months, you're well aware that this is about much more than just the latest police shooting of a Black man. Players aren't simply outraged that this happened, they're outraged that it keeps happening. And they want us to know they aren't going to just keep playing basketball or baseball or football or soccer on our televisions as if it's not.

The NFL is well aware of this. Thursday morning, two weeks before the scheduled season opener between the Super Bowl-champion Kansas City Chiefs and the Houston Texans, one of the highest-ranking officials at the league's Park Avenue offices appeared on ESPN Radio in tears and said of NBA-style boycotts happening in the NFL, "If we're not expecting this is going to happen, then we're not living in reality."

"They're already happening," NFL executive vice president of football operations Troy Vincent said on the Keyshawn, JWill and Zubin Show. "We saw the young men in Detroit and Seattle and today in Washington. ... We've just got so much work to do."

The emotion in Vincent's voice was a striking reminder of the irrelevance of the old rules and boundaries that used to surround our sports. Vincent is a powerful league executive with a vested interest in making sure the NFL season is as smooth and successful as possible, but he's also a worried Black father who spoke about trying to prevent his three sons from "being hunted." The significance of the latter role has pushed the former one well to the side. Co-host Keyshawn Johnson asked Vincent how difficult it was to have these conversations with the NFL's 32 team owners, who are Vincent's bosses.

"Many are there, Key, and I must say in full transparency, many are not, because they think it's a disruption of the business," Vincent said. "We're not asking -- the players, we as Black men -- we're not asking for anything that you're not looking for for your children, your families. It can't be any clearer. When you watch the video of eight minutes and 46 seconds of a knee on somebody's neck who's handcuffed, that should not be a dispute."

That reference was to the killing of George Floyd in Minneapolis three months ago, not the shooting of Blake this week, but it served to underline Vincent's point that this is a much broader issue.

"Now, how do we address this together? We need your influence as an owner," Vincent continued. "We need you to bridge the gap for us. We need you to talk to the DA. We need you to have conversations with your local and state officials. We need you to address police reform. ... We're just asking them to be in this fight with us. We love our game. We love the game that we play. But our communities are under siege and we can't have a blind eye to it."


Vincent has been talking to players, and he's amplifying what they've told him -- that they want team owners not only to allow the player protests they tried to eliminate two years ago but to stand with them this time. The players are crying out for help while also offering a road map for internal NFL peace.As of this writing, no NFL team owner had commented publicly on the issues surrounding this week's practice cancellations. For those concerned about disruption, broadcasting to the world that you're on the players' side could potentially have the dual effect of saving your season and actually doing something helpful.

"The challenge is now on these owners," Eagles safety Rodney McLeod said Thursday. "We want them to speak out on a lot of these issues that exist, for their players. Just as much as we're held accountable and we represent each organization a certain way when we leave this building, we expect them to now stand up and speak out on these issues to protect us as Black men. And I think that is the message that we as players should really enforce is that these owners come together and not only support us privately but step up and support us publicly as well."

The players do have answers for those who would decry the boycotts and ask what they're actually doing. Cleveland Browns pass-rusher Myles Garrett started a petition that would lead to the criminalization of hate speech. The Tennessee Titans, in their team meetings Thursday, talked about voter registration initiatives, community outreach and setting up meetings with elected officials. Players such as Malcolm Jenkins and Doug Baldwin have been actively working for the past couple of years to get legislation passed to address issues such as prison reform, and in some cases the laws they've supported have been enacted.

There are plenty more examples of concrete ideas and real action behind the words and symbols. The protests and the threat of boycotts are designed, at least in part, to get the attention of those who can help the players deliver the change. If the NFL's owners are concerned about a disruption of their business, then forcing them to confront that disruption is a great way to get their attention.

"We're just trying to figure out what we can do to not only bring light to the situation and how it's wrong, just with police brutality," Lions safety Duron Harmon told reporters Tuesday after the team's demonstration, "but how can we, as a team, create change not only amongst ourselves but amongst the community so when things like this happen, we're speaking on it and putting the pressure on officials to do the right thing and prosecute these officers to the fullest extent."

In early June, when protests were erupting around the country following the police killings of Floyd, Ahmaud Arbery and Breonna Taylor, several high-profile NFL players,including star quarterbacks Patrick Mahomes and Deshaun Watson,recorded a video calling out the league for inattention to the issues behind the protests. NFL commissioner Roger Goodell recorded his own video the following day, saying a number of the things the players in the first video wanted to hear from the league. Goodell followed that with a series of conversations with the players in the video and other players around the league about off-field issues that were important to them. When the NFL announced in June that it was establishing a new voter education and registration initiative, Goodell said it grew out of those conversations, in which players stressed voting as a key cause they wanted the league's help in supporting.

That's just one example -- or else, it had better be just one example if the NFL wants to keep its players happy in the ways that are meaningful to them beyond their paychecks and playing time. NFL players want to know that their league and their teams are behind the causes and issues that they care about. They want support and assistance from their deep-pocketed team owners in helping push the legislative and community reforms they support. They know that pressure from a billionaire team owner might resonate differently with a state legislator or a U.S. senator than even a plea from a star quarterback does, and they feel these issues need all the help they can get.


"We've been protecting the shield," Jets running back Le'Veon Bell tweeted Thursday. "It's time for the shield to protect us."

It didn't go unnoticed among NFL players that the Milwaukee Bucks spent a portion of Wednesday night talking to Wisconsin state legislators and executives about what could be done to address police reform. That's the kind of thing NFL players have been doing sincefour years ago Wednesday, when Colin Kaepernick first sat on the bench during the national anthem in protest of these very same issues. It's the kind of thing they want to continue to do so that symbolic protests and bottom-line-rattling boycotts don't represent the extent of their actions on the root issues.

"Are we going to change the world? No, not at all," New England Patriots cornerback Jason McCourty said Thursday. "This system has been built over hundreds of years, and it's not going to be a few guys on the Patriots that play football that's going to embark a change on a system that's automatically going to go to being equal and fair to everybody. But I do feel like we've been blessed and we've been placed in the situations we're in to make a difference. That's not just chasing Super Bowls. It's bigger than that. When you realize that, it allows you to continue to move forward and continue to fight for what you feel is right."

This is the current mindset of the NFL player angry over a repetitive news cycle of police violence against Black people. It's the same mindset that drove a player-led boycott of NBA playoff games Wednesday. McLeod cited the NBA's player boycott and indicated that NFL players could "possibly take extreme measures." So if you don't think the same thing that happened in the NBA this week can happen in the NFL two weeks from now or two months from now or the week the playoffs are supposed to start, you're not paying attention. And if the league's 32 team owners want to make sure it doesn't, then the best thing they can do is make sure the players and the public know that they are. 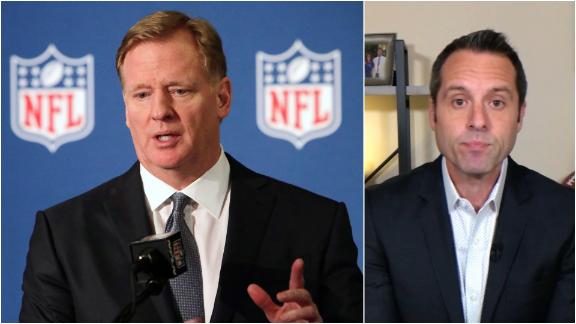 How will the NFL react to other leagues postponing games?
Dan Graziano says NFL players want to see the league and team owners show support and engage in conversations with legislators about police reform. 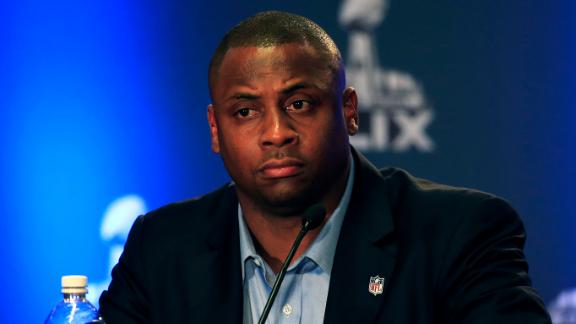 Troy Vincent brought to tears by how proud he is of players' boycott
An emotional Troy Vincent goes in depth on the racial inequalities in the U.S. and how change needs to happen. 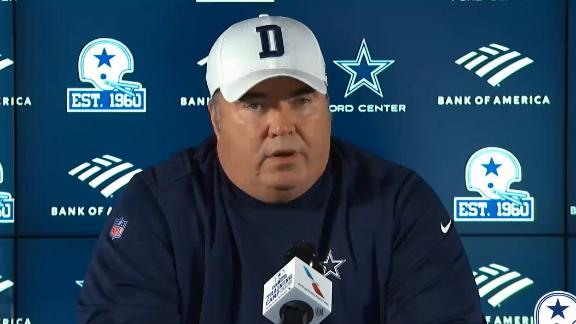 McCarthy: Difficult to talk football right now
Cowboys coach Mike McCarthy says it's difficult to talk about football with everything going on in the country. He also offers his support to the Bucks for protesting by not playing. 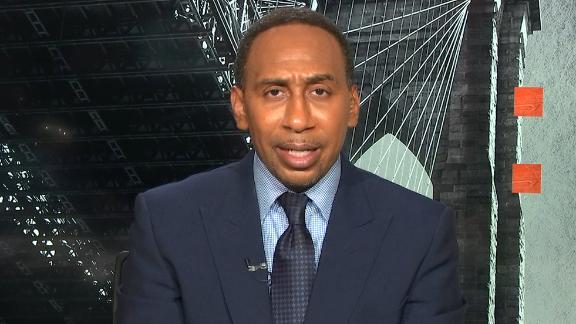