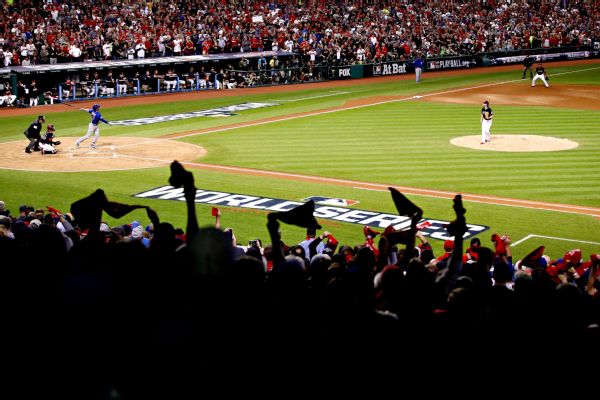 As theCubs went up 7-0 early in Game 6 of the World Series against theIndianson Tuesday night, tickets to Game 7 on the resale market exploded, as Chicago fans undoubtedly felt the need to be in Cleveland to potentially celebrate the team's first title in 108 years.

Ticket market tracker TicketIQ data reflects that right before Game 6, the average asking price for a Game 7 ticket was $3,922, with the average actual sale hovering around $1,800.

"A pair of seats is costing fans $2,000 per ticket, after fees," said Patrick Ryan, co-founder of Eventellect, a resale market ticket distribution company. "That is more than the 'get in price' for eight of the past 10 Super Bowls. It's unique, but it's the number most industry insiders would expect the get in for a Cubs Game 7 to be."

On StubHub, the most expensive tickets bought on Tuesday for Wednesday night's closing World Series game were $19,500 each for a pair by the Cubs dugout, where most of the bigger purchases were made.

"I would have never dreamed of getting these prices for baseball in Cleveland," said Mark Klang of Amazing Tickets, a ticket brokerage based in the city.

When informed of the prices of Game 7 tickets, Cubs catcherDavid Ross, who said he will retire at season's end, saw an opportunity for himself.

"Can I sell mine?" Ross asked. "I'm going to be looking for a job after tomorrow."

Those with tickets to sell weren't the only ones benefiting. Two hotels on Ninth Street in downtown Cleveland sold out for Wednesday night with huge room-rate asking prices: The Kimpton Schofield Hotel was getting $700 for a regular room, while the Hampton Inn sold out at $1,500 a room. Rooms at the hotels typically range from $130 to $160 a night.

Will Cubs have advantage facing Kluber for third time?
Doug Glanville breaks down how, if at all, Corey Kluber's approach changes when facing the Cubs for a third time in the World Series, as well as explains why defense is the key for each team heading into Game 7.
Related topics:
sportsespnprogressive fieldcleveland indiansgame 7mlbticketsresale2016 world serieschicago cubs
Copyright © 2020 ESPN Internet Ventures. All rights reserved.
More Videos
From CNN Newsource affiliates
TOP STORIES