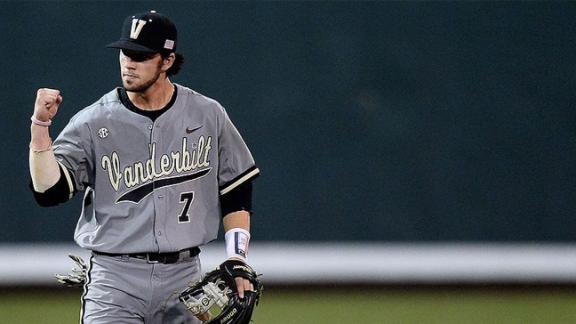 The Arizona Diamondbacks selected Vanderbilt slugger Dansby Swanson with the No. 1 pick Monday night, setting off a history-making run at the position.

And for the first time, Colorado made it 3 for 3 by taking Florida high schooler Brendan Rodgers at No. 3 overall.

A fourth shortstop went 10th, with Philadelphia selecting Georgia high schooler Cornelius Randolph. A record-tying eight shortstops were selected in the first round (36 picks), matching the number that were taken in 1971 and 2002.

Swanson, who helped lead the Commodores to the College World Series earlier in the day, was the first college shortstop to be the top pick since Brown University's Bill Almon in 1974.

"I think it sounds pretty good," a smiling Swanson said in an interview on MLB Network.

It marked the first time the Diamondbacks had the No. 1 selection since they took Justin Upton in 2005.

Swanson seamlessly switched from second base to shortstop this season as a junior. He was the Most Outstanding Player at the College World Series last year, helping the Commodores to the national championship. Swanson is a finalist for the Golden Spikes Award and Howser Trophy, given to college baseball's top player.

"An exceptional baseball player that has all of the intangibles and makeup of a championship-type player for which this organization is building a foundation on," Diamondbacks scouting director Deric Ladnier said in a statement.

Swanson's selection was also hailed by Detroit Tigers ace David Price, who is the only other Vanderbilt player to be selected No. 1 overall in the draft.

Swanson also is the first shortstop -- college or high school -- to go No. 1 since Houston took Carlos Correa out of the Puerto Rico Baseball Academy in 2012. Correa made his major league debut Monday night, just more than three years to the day after he was drafted. He went 1-for-3 with an RBI in a 3-1 loss to the White Sox.

Two of Swanson's teammates at Vanderbilt were also first-rounders, with righty Carson Fulmer going eighth to the Chicago White Sox and Walker Buehler, also a right-hander, No. 24 to the Dodgers. The trio made the Commodores the fifth college program to have three players chosen in the opening round.

It was the 50th anniversary of the first draft in 1965, and the first for new commissioner Rob Manfred, who took over when Bud Selig retired in January.

"I actually was going to call him on the way out here and I got tied up," Manfred said, minutes before stepping to the podium to begin announcing the first-round selections. "So I didn't get any advice. I think I can get through it."

The Astros received the No. 2 pick as compensation for not signing pitcher Brady Aiken, last year's top pick. Aiken was taken by Cleveland at No. 17 despite having Tommy John surgery in March.

Bregman is the offensive leader of an LSU team that will play in the College World Series and has been ranked No. 1 in the country in several polls for most of the season. The Golden Spikes Award finalist is hitting .312 with nine homers and 49 RBIs, and has stolen 37 bases.

"It's such an honor," Bregman said. "I can't wait to get to work right after we go win the College World Series."

Houston kept things in the family at No. 5, taking Florida high school outfielder Kyle Tucker, the younger brother of Astros outfielder Preston Tucker. He broke his brother's school record with 31 career homers, and has the power to potentially move to a corner outfield spot at the next level.

With the first pick of the second round, the Astros went for another player with baseball bloodlines by taking Georgia high school outfielder Daz Cameron, son of former All-Star Mike Cameron.

Rodgers was the first of four players in attendance to have his name called by Manfred, shaking hands with the commissioner while slipping on a Rockies cap and jersey.

"I really have no words right now," Rodgers said. "I'm in awe right now. This is a dream come true."

Rodgers, from Lake Mary High School, was widely regarded as the best prep player in the draft. He has power to all fields, soft hands and good range at shortstop -- where he could remain in the pros.

Rodgers said he had 22 friends and family members at the draft, nearly all from Florida, and a roar went up when his name was announced.

The other three prospects in attendance also got selected in the first round: New York high school outfielder Garrett Whitley went 13th to Tampa Bay; Indiana high school righty Ashe Russell was picked 21st by Kansas City; and Pennsylvania high school right-hander Mike Nikorak was the No. 27 selection by Colorado.

UC Santa Barbara fireballing right-hander Dillon Tate was selected by Texas with the fourth pick, giving the Rangers a potential staff ace or late-inning reliever. He was one of the best closers in the country last year, and established himself as an outstanding starter this season for the Gauchos.

At No. 6, Minnesota drafted Illinois closer Tyler Jay, a lefty who could be a starter at the next level because of his excellent command of four pitches. He took the loss after starting in the Illini's season-ending loss to Vanderbilt shortly before he was drafted.

"Ultimate low, ultimate high in about a half-hour or so," Jay said.

Arkansas outfielder Andrew Benintendi (Red Sox), Fulmer, Cincinnati outfielder Ian Happ (Cubs) and Randolph rounded out the top 10. Georgia high school catcher Tyler Stephenson, who some thought was in the mix for the No. 1 pick, went 11th to Cincinnati.

College of Southern Nevada right-hander Phil Bickford was drafted 18th by San Francisco after failing to sign with Toronto in 2013 when he was the No. 10 pick.

Rounds 3-10 will be held Tuesday and rounds 11-40 on Wednesday -- both days via team conference calls.

Swanson: 'Incredible' 15 minutes
Dansby Swanson talks about Vanderbilt's winning to advance to the College World Series and his being picked No. 1 in the MLB draft all within 15 minutes.