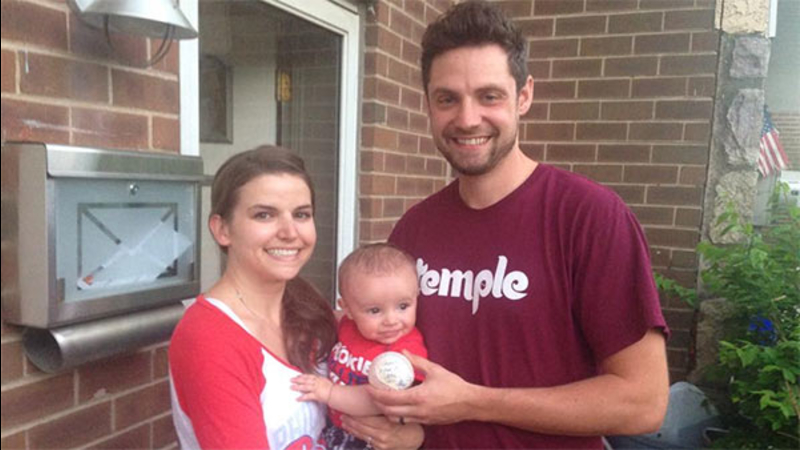 PHILADELPHIA (WPVI) -- Mike Capko knew he and his family had good seats in the second deck.

It was the top of the 4th and the foul balls were flying. He just needed to be ready to catch one - and oh baby did he.

There's a catch. and then there's this - an epic bare handed foul ball grab that had Phillies fans out of their seats.

The 30-year-old from Conshohocken made that catch Sunday afternoon during the Phillies game against the New York Mets at Citizens Bank Park.

Along for the ride and strapped to his chest was Capko's 7-month-old son Kolton.

"Grab it, snagged it and I was just ecstatic. I was like, 'I couldn't believe that just happened,'" said Capko.

How did it feel?

"Oh it was exciting and I'm still excited," he said.

Capko has never played baseball but the longtime Phillies fan has watched enough of it.

That foul ball hit by Mets player Daniel Murphy was traveling fast when the dad, a right hander, made that amazing catch with his left.

"It hurt - I mean my hand is a little sore. He crushed that ball but something like that you have a natural reaction and it worked out great," said Capko.

"I've never caught a foul ball in all the years I've been going to Phillies games and I said this is the first time we're going to catch a foul ball and it's going to hit my son right in the head," said Alyssa Capko.

Capko's wife Alyssa says they went to the Mother's Day game last minute and it was Kolton's first.

By the end, his dad had snagged a souvenir - former Phillies third baseman and hall of famer Mike Schmidt even signed the ball.

The Capkos say they'll have quite a story for their son when he gets older - and they've got the evidence and video to prove it.