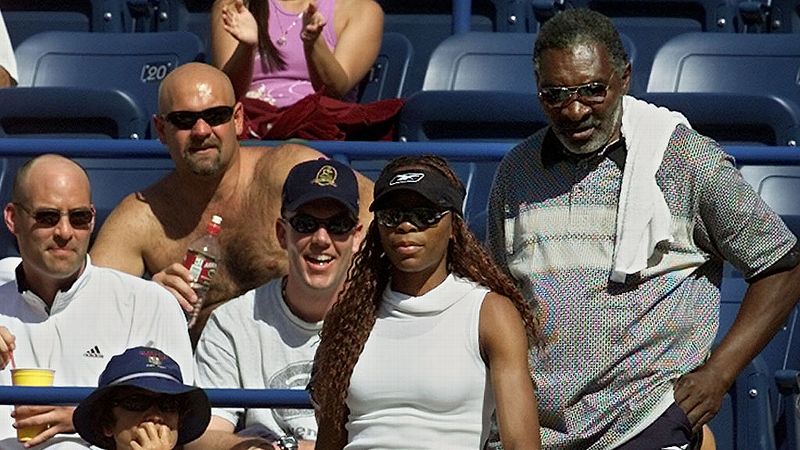 ESPN
Serena Williams' father says he won't return to Indian Wells, Calif., the site of a tournament she has skipped since 2001, when her family was booed and subjected to racial epithets, according to his new book.

"I would never go back," Richard Williams said in a telephone interview.

But he added that it's up to Serena whether she plays at Indian Wells again.

Serena was on the entry list for the event this year but withdrew, citing a back injury.

"She was taught to make terrific decisions," he said. "Any decision she makes, I would be behind, 1,000 percent."

His book, "Black and White: The Way I See It," comes out May 6. It goes into detail about how Indian Wells, in his words, "disgraced America."

The book covers plenty of other ground, although there is not much that is revelatory about the professional tennis careers of Serena and Venus Williams. He said he has another book in the works that's focused more on them.

Taught the game by their father, the sisters have won a combined 24 Grand Slam singles titles and have both been ranked No. 1.

"I released the book because Serena kept telling me to," Williams said. "She thought it would help a lot of people."

It is dedicated to his mother, and much of the early chapters concern lessons she imparted to him and her influence on his life -- and, by extension, his children's lives.

There are meditations on the American dream, ambition and, above all, racism. The latter is the prism through which Richard Williams learned to see the world and, as he repeatedly hammers home, still does to this day.

In the book, Williams explains how his world view was shaped by growing up in Louisiana and during his time in Chicago as a young man.

There are tales of run-ins with the police and confrontations with strangers, often ending in violence.

"I could not embrace a turn-the-other-cheek philosophy," he writes.

At another point, he writes: "I became fascinated with stealing at the age of eight. I don't know if the thrill was being able to get away with a crime, or that the crime was against the white man. Either way, it was the start of a prosperous career."

Richard Williams Not Returning To Indian Wells
Howard Bryant discusses comments made by Richard Williams, father of Serena and Venus, in a new book indicating that he will never return to Indian Wells because of an incident in 2001 when his family was booed and subjected to racial epithets.
Related topics:
sportsespnrichard williamsfatherdadbooktennisserena williamsespnw
Copyright © 2020 ESPN Internet Ventures. All rights reserved.
More Videos
From CNN Newsource affiliates
TOP STORIES